Flashback: Hillary Clinton: We Need People Like George Soros To Step Up & Get Involved In Our Countr
DC Clothesline ^ | October 12, 2018 | Tim Brown

People who are in the know, have probably seen the following video and heard failed presidential candidate Hillary Clinton’s introduction of George Soros at the “Take Back America Conference” in June 2004. However, for those who have not, this might be an eye opener as not only does Clinton introduce Soros, but claims that we need men like him who are “fearless” and willing to “step up” when it counts. She is obviously indicating that he should get involved in the American political process, which he has done with billions of dollars.

Here’s a brief documentary on Soros. Clinton’s comments begin around the 11:00 mark. Take a look.

“We, once again, have to become better citizens,” said Clinton.

“You know, it is not enough for America’s future that some participate and others don’t,” she continued.  “We have been given an extraordinary blessing, and at this moment in time, our country needs us, and we need people like George Soros, who is fearless and willing to step up when it counts.”

Of course, this was to thunderous applause from the gathering of Marxists.

The implication is that Soros is needed in American politics, though she doesn’t say those exact words.  The meaning is clear.

So, that was 2004.  This is 2018.  Has the unrepentant Nazi sympathizing collaborator Soros gotten involved in the American political process?  You bet he has!

TOPICS: Conspiracy; Government; Politics
KEYWORDS: election; hillary; money; regimechange; soros Navigation: use the links below to view more comments.
first 1-20, 21-24 next last
Everybody should now know the importance of Soros money to the ComDems and also to far too many GOP candidates, but they clearly don't understand.

It is not surprising that Hungary has such a strong feeling of hatred to Soros. (he is from there)

There are a bunch of Bush League Republicans on the Soros payroll as well. 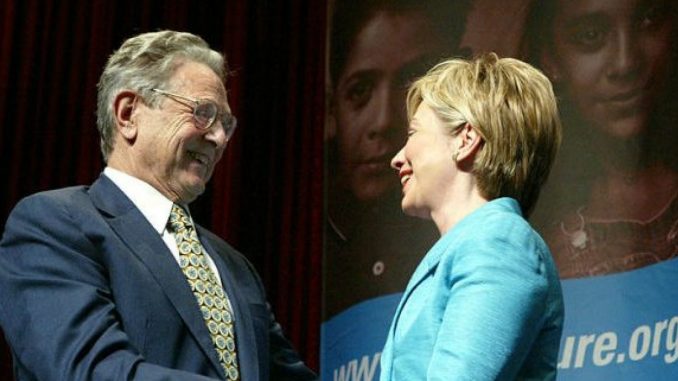 Tell that to someone from Brazil.

Funny, she said the same thing about DONALD TRUMP!

The Clintons and Soros are running a “regime change” program against the US using the same methods that they used against countries all over the Middle East, as well as Ukraine, during her reign of terror as SoS.

Even some of the same people are involved, notably Victoria Nuland.

This is explicitly seditious, and arguably rises to the level of treason.

She has sold herself to our enemies more times than we can count.....

Well, THAT’S the ONE great thing about being a whore.

Imho, soroz is the most evil person on earth today Anyone unfamiliar may wish to google his name at the discoverthenetworks website - just look at all the seditionist communist Nazi type hate/ filled organizations and political movement he pays for!

Imho, soroz is the most evil person on earth today Anyone unfamiliar may wish to google his name at the discoverthenetworks website - just look at all the seditionist communist Nazi type hate/ filled organizations and political movement he pays for!

Why is Hillary getting so much Press lately ,is she about to be indicted ?

Maybe it's the belief the DEMs need to ramp up the women's vote. And we all know how much women in this country love Hillary!

WHAT we need is for peeps like Sorass and the Clintoons to die...until that happens doesn’t much matter who is at the helm of this cabal, America is going to be fighting with all her might to stay afloat...

I want to see all these cabal crooks hung in the ‘town square’ until they are dead!!!

I think they died already but the crazy libs keep propping them up as”Star” leaders of their insanity.

Why can’t his naturalization be yanked?

George Soros is perfect for the leftists liberal fascist, he’s rich beyond imagining, understands liberal fascism and its emotion driven ideology, ( Soros was a Nazi sympathizer , drove death camp trucks for them in his youth), and is about to die of old age leaving huge bucks to the Clinton Foundation or some such.

He should be a target of the Israeli war crimes committee.

Why is this man still walking among us?

We need to cut off the head of the snake, and he’s the head.