From The Huffington Post’s twitter feed – a portal that directs straight to hell.

It’s too bad that “what justice means” in the the world they want to live in is more informed by Marx, Nazi Germany and Orwell’s 1984 than by the U.S. Constitution.

So YOU sit down and shut up while they go about shaping the world they want you to live in, dictated by THEIR idea of justice – which apparently now includes being guilty until proven innocent. And it will not include any images (or words) that are contrary to their view of the world. 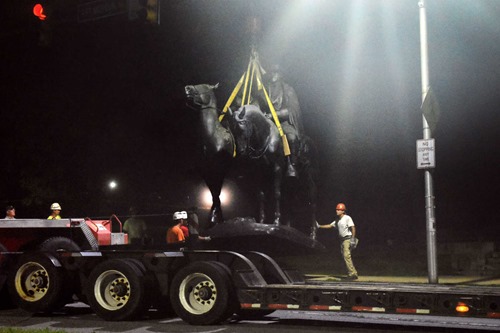 The Jackson-Lee Monument is removed in Baltimore

One can only wonder if they would recognize irony if it bit them on their not insubstantial arses. 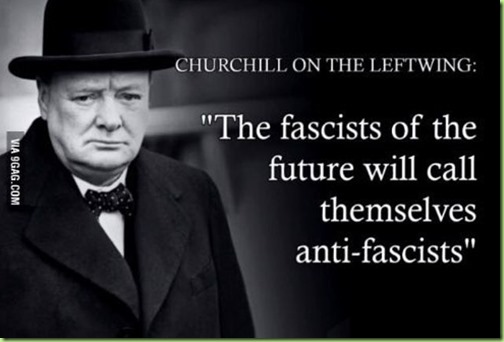 With apologies as I see we’re no longer allowed to quote one of the greatest men of the 20th Century because…SHUT UP!

And don’t worry about educating yourself Scott, the New Socialist Progressives have already arranged that for you.

“Don’t you see that the whole aim of Newspeak is to narrow the range of thought?…The whole climate of thought will be different. In fact there will be no thought, as we understand it now. Orthodoxy means not thinking -- not needing to think. Orthodoxy is unconsciousness.”

What they don’t seem to realize, or they are so narcissistic they simply do not care, is that what they have been indoctrinated to believe is a “bold vision” etc. is a world most of the rest of us find abhorrent. Yet in the tradition of fascists, dictators, and oppressors throughout history they are going to impose their will, their vision on the rest of us. They’ve convinced themselves it is for our own good and the ends justifies any means. These are extremely, dangerously deluded and ignorant people. They have been manipulated by “leaders” who know exactly what they are doing.

These people are better compared to Lenin, Stalin, the Bolshevists, Soviets, and the Cheka. The literally fly commie flags. The social justice warrior is just like a Bolshevik. So I don’t understand the constant references to NAZIs that were fierce nationalists while the commies were anti nationalist (like todays Democrats).

Somebody tell this jerks that “1984” was a warning, not a manual!

When ignorant men embrace corruption, believing it to be salvation.

The only way to “not understand” it is to be willfully blind. Their ideology isn’t the issue, it’s their tactics that align them with fascism.

Their tactics are absolutely Bolshevist. They mean to put people into gulags (Hillary called them “fun camps”) to ‘end racism’, ‘end white supremacy’, and end ‘unearned privilege’. NAZIism is not nearly as likely as a Commie takeover.