Anthony Bourdain pulled no punches in one of his final interviews as the celebrity chef slammed Bill Clinton for being 'rapey, gropey and disgusting' and spoke of how he imagined Harvey Weinstein dying alone in a bathtub.

The globe-trotting food chronicler, who hanged himself in a French hotel in June, gave a lengthy and wide-ranging interview to journalist Maria Bustillos for her recently launched magazine Popula.

The interview was conducted in one of Bourdain's favorite Irish pubs in New York back in February and was only published on Sunday. It covered everything from Weinstein's downfall, the Clinton-Trump election and even Jared Kushner's eyebrows.

Bourdain - one of the most outspoken male supporters of the #MeToo movement - touched on Bill Clinton's sexual misconduct allegations, saying it would not have flown today.

Bourdain went on to condemn the way Clinton and wife Hillary 'destroyed these women' who came forward with the allegations....

Gotta say, I am not sure what sent Andrew over the edge, but I basically saw him as on balance, a good guy.

Based on this article you may be right.

Bill Clinton, look, the bimbo eruptions - it was f***king monstrous,' Bourdain said, before describing the former presidents as 'a piece of s**t, entitled, rapey, gropey, grabby, disgusting'. Bourdain went on to condemn the way Clinton and wife Hillary 'destroyed these women' who came forward with the allegations...

I read, the whole, entire, very lengthy, interview and virtually learned nothing of interest to me.

Thanks so very much for the posting ... LOL.

That was my reaction too.

All this does is show just exactly how unhappy Bourdain was. 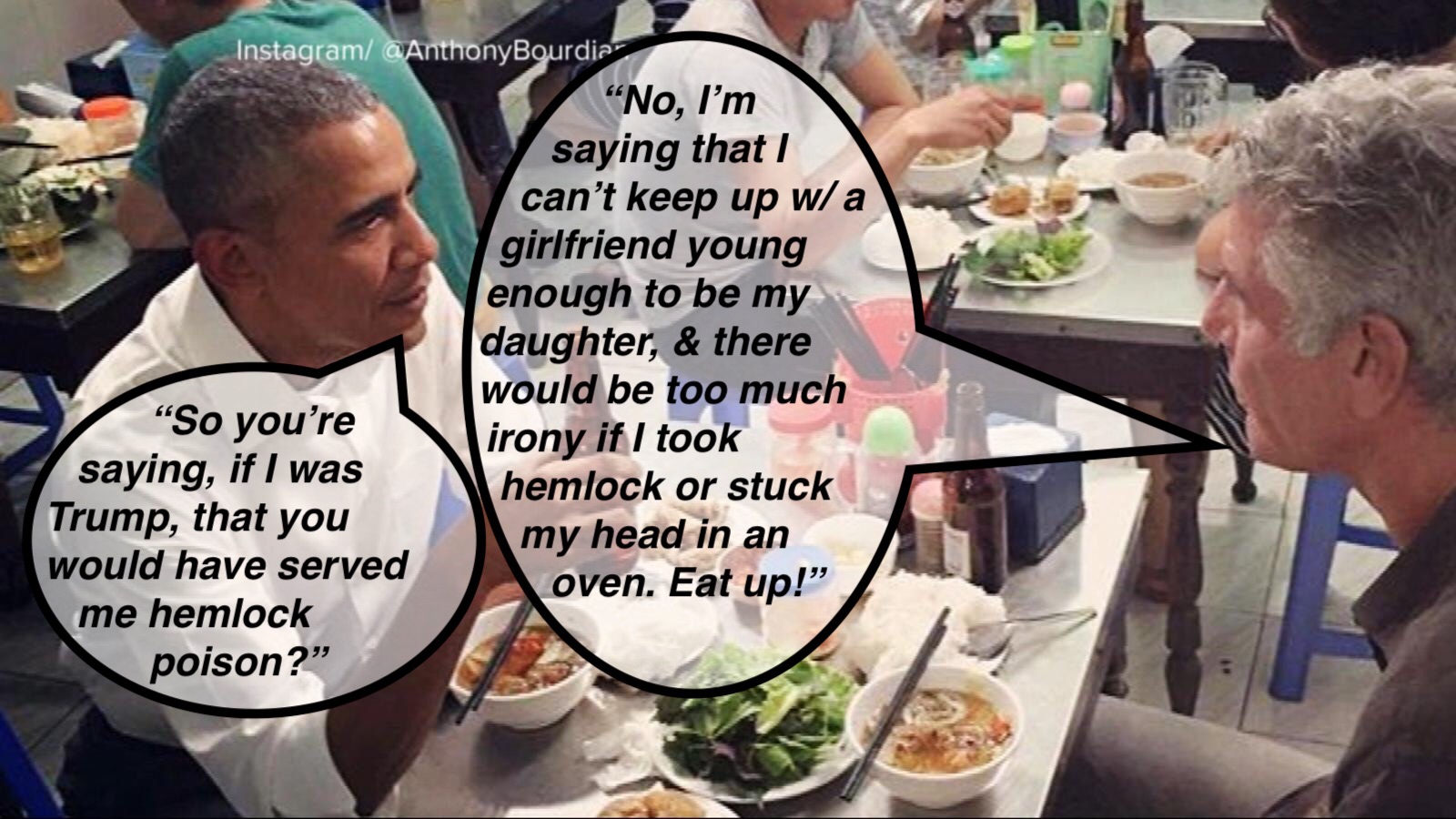 Whatever you may think, Manhattan is a rather small town with regard to how news travels in social circles.

She and Bill knew all about Tony's interview with Maria Bustillos shortly after it occurred.

And everyone knew about Tony's dislike of Harvey Weinstein and his talk (Tony's) of Hillary's and Bill's closeness to Harvey.

I don’t understand today’s journalism. You interview a chef/food critic and quote him on a wide ranging verbal rampage about politics? I’ve published fifty-seven articles. Not one wandered off the topic I was writing on and I never interviewed a politician. And, he said things that were speculative and foolish. If someone is kind enough to give you an interview, never quote them as saying something mean or foolish, like he’d want someone beaten to death...

So yeah, he was Arckancided.

13 posted on 07/16/2018 2:27:15 AM PDT by wastedyears (The left would kill every single one of us and our families if they knew they could get away with it)
[ Post Reply | Private Reply | To 1 | View Replies]
To: wastedyears
Pissing off the Clintons comes with consequences and repercussions.

You gonna eat that cornbread?

I thought about that, and even if interview not released the reporter could have warned Clintons of content! WOW! Lots of fake suicides involve Clintons.

I think murder is in Clintons, and any excuse will do. Hillary is in dementia stage or self pity take over....she is ridiculous!imho

How many suicides by hanging are actually suicides? Few, I think, except among the prison population when that’s pretty much the only option. If this guy were going to off himself, I think he’d have chosen a different way.

I read nearly all of it and what struck me as I’m reading is that this article is going to hit a lot of young anti-Trumpers/Hillary voters hard. Millennials and gen-xers LOVED Bourdain and admired and respected him for his iconoclastic, jaded, world-traveler, diversity-embracing, every-man style. They’re multi-cultural eaters and local craft beer drinkers because it’s what his show was about. When they read the opinions of this revered man about Hillary and Bill it’s going to have a major impact on their own opinion of Hillary. Many of them are unaware of this part of the Clinton’s history. I hope this interview circulates widely in its entirety. Everyone should post it to social media and tag young people on your on your friends list. Message it, text it or email it to them with the line: one of Anthony Bourdain’s last interviews, thought you might be interested.

“...… Clinton and wife Hillary ‘destroyed these women’ who came forward with the allegations”...……

It’s exactly why the Clinton’s got where they were. Accuse everyone of doing exactly what they, themselves have done or were doing. Not new news!