Hungary: How to Overthrow a Government Voted by the People
Enza Ferreri Blog ^ | 8 December 2014 | Enza Ferreri 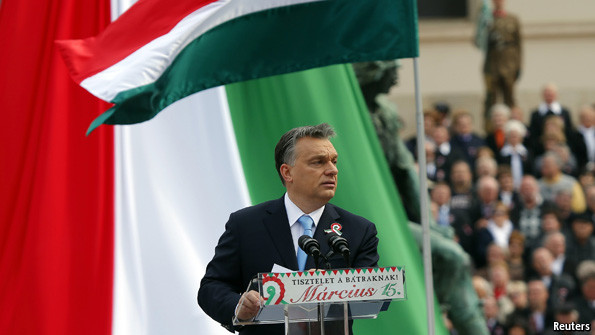 The policies enacted by the Orban administration, in defense of national interests against the world's great capitalists, are being fought by underhanded means and by resorting to street protests organized and financed by foreigneres.

By Kovács Andras - Translated by Alessandra Nucci from Riscossa Cristiana.

The street demonstrations against the Orban administration which are taking place in these days are useful to the European Union and the United States who aim to carry out a coup d'état. Why? Because Viktor Orbán isn't doing their bidding. It isn't the Hungarian people who want to topple the government. Last April the government was re-elected to office by two thirds of the people! Our enemies are strangers to Hungary, who want to interfere with the inner workings of the country. They use well-oiled mechanisms, they are financed by George Soros and they will stop at nothing in order to preserve their power and their profits on the Hungarian market. They find traitors to our homeland – the opposition – who are willing to lend their support, for a price, and they appeal to “simple people” who believe them.

Viktor Orbán wants to tax multinational corporations who gain many benefits in Hungary but don't pay taxes, or pay very little. Besides this, they also exploit their employees, they take all their profits out of the country and then make it impossible for small and medium-size companies to operate. Prime Minister Orban also wants to tax the banks which, with foreign currency credits, have deceived thousands of families and ruined their lives. Orban has lowered the cost of electricity, gas and water and wants to continue to lower it, to further lighten the Hungarians' utility bills, but the providers of these services are Israelis who live in France and Germany and who do not want to lose any profits.

Another reason for contention lies in the potential gas pipeline that would come from Russia, bypassing Ukraine, through Bulgaria, Serbia and Hungary, and as far as Austria (the southern flow).

So you see it's a matter of damages to consolidated interests (the enormous profits risk being lower) by all these activities by the government. They find them annoying, which is why they interfere.

George Soros finances various organizations belonging to the opposition, as well as opposition leaders Gyurcsány Ferenc and Bajnai Gordon. Then we have André Goodfriend, American chargé d'affaires, who is extraordinarily active in the internal affairs of Hungary. Here, by the way, I would like to add that the same “Good Friend”, acting as Consul General in the years 2009-2012, did his best to bring down the Syrian government. And now he wants to tell the Hungarian people what to do.

They make up stories about fake corruption and make false accusations against the government – which they are never able to prove or witness to – mixing up the news, recruiting traitors among Hungarians who are ignorant and are ready to create a stir; after which they let the West know that the Orbàn government is unacceptable and that the 2/3 outcome in the elections doesn't count.

During the peace marches organized in favor of the government there was never any violence, any incident. Indeed, there was a particularly peaceful atmosphere, people sang and talked and were of good cheer. Quite the contrary of the current demonstrations against the Orban government, where there is evidence as to how some of the participants beat up some journalists, spit in their faces, destroyed the headquarters of the FIDESZ party (the party of the Prime Minister) causing huge damages; and they knew no limit in shouting curses and vulgarities. You can see the difference between the two crowds from a mile away, they are the opposite of each other, civility as opposed to incivility incorporated with anarchy.

This incivility was what also characterized the demonstration against the internet tax ”organized” by Gyurcsány Ferenc and by the people who are backing him, financed by Soros and which Goodfriend took part in. First of all the internet tax was a pretext, because without a motive that appears to damage almost everyone there would have not been so many people in the street at the request of Gyurcsány, whose popularity has lately taken a dive. Under the slogan “don't tax the Internet” he managed to move a small crowd. But the fact is that the bill of law said that the tax was to be paid by the providers and was not to be passed on to the users, and it was capped at 3 euros. But there are always people who don't know all the details and are ready to make a stir. So here you have your news fit to publish all over the world about how unhappy the Hungarians are and how unacceptable the Orban administration is, etc.

This scenario and succession of events are comparable to the coup d'état in the Czech Republic, where with the same methods they toppled the Necas government, and also to the events in Ukraine and those of the Arab Spring (Tunisia, Libya, Egypt, Syria). Unfortunately they always manage to camouflage their secret activities, while besmirching the image of whoever is against them, after which it is difficult for us outsiders, common people, to understand who was right.

This is why we must reflect on the news that is broadcast and consider events from different points of view. Otherwise we too will end up by believing our enemies.

For the moment we Hungarians who support the Orbán government do not intend to demonstrate, but await the development of the entire matter. If the foreign attacks do not cease, then it is our intention to take to the streets and show how close we are to our government, and how much we want to defend it.

Thank you for reading this article. I wish you all the best.

Is there anything that interests you other than things you have written yourself?

“They use well-oiled mechanisms, they are financed by George Soros”

Israelis living in France and Germany are keeping the utility bills high in Hungary? Really?

Thanks for posting the article.

Yup. The dirty joos sure are busy bees all over the world.

Sounds like Soros hired on his OWS lackeys to help out overseas.

From the 2011 Fundamental Law of Hungary adopted by Parliament: “We recognize the role of Christianity in preserving nationhood.”

Wonder why they want to overthrow? The Evil One does not sleep.

God be with them.

This tripe is utter garbage!
It sounds as though YOU would be cheering on the damned USSR tanks, in 1956, trampling down the freedom loving Hungarians, trying to get away from their stinking Commie overlords.
Orban is a Putin loving, anti-West, turncoat, who was once, supposedly an Anti-Commie.

~Orban is a Putin loving, anti-West, turncoat, who was once, supposedly an Anti-Commie.~

Hmmm, tell me what exactly is ‘commie’ about him? I can’t see a thing like that from his words and actions. I might haven’t paid enough attention though, so would be appreciated if you can prove me wrong.
Otherwise, I see a growing tendency on this forum with numerous allegedly conservative posters who lost the understanding of entire concept of communism and its ugly ways. Every thing they don’t like (or told not to like by Obama’s administration via various channels), especially if the thing is located in East Europe is automatically considered ‘commie’ by said people.