I notice Brian Cates sometimes posts from the Babylon Bee. I wish someone on twatter would let him know it’s fake news.

It’s like the Onion. Down at the bottom it says:

“The Babylon Bee is Your Trusted Source For Christian News Satire.”

Do you mind if I imagine Two?

The other day I heard Trump (which talk? Presser? Can’t remember) talking about drug dealers and he stressed that the solution is the death sentence, at least twice. He’s also expressed his support for death penalty in some rally or rallies.

I am a HUGE supporter of death sentence for treason and other crimes, such as murder.

And NOT after decades of legalese bulls*** trying to run out the clock on OUR DIME!

Big issue of mine... 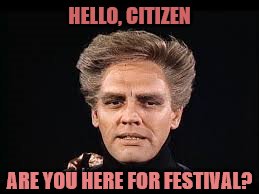 Not only do you actually give insights and many chuckles, your re-hash allows us to review what we raced through at the very moment of the drop.... and see some QLUES we might have missed, like this one:

“A very interesting gem comes in here when Q says,

Does [SDNY] report to AG BARR?
Watch the news.”

I’d love to see those thumb-sucking scumbums in SDNY get theirs.. WHACK WHACK!!!

and said it with a nice secret smile, lol....

IIRC, all those people who take an oath to the constitution could possibly be tried in tribunals depending on what they have done as we are in a state of war, and have been in a state of emergency since 9/11.

This was discussed a while back, but I don’t recall all the details.

Patriot Country of stable geniuses, wise and practical people. Salt of the Earth. The real roots of America.

I'll share a few things but it would take a book to share everything. Trial and error and pushing all the buttons = learn.

Not used here but great tool: If you use MS WIN, learn to use the Windows Snipping Tool - At bottom of post 2 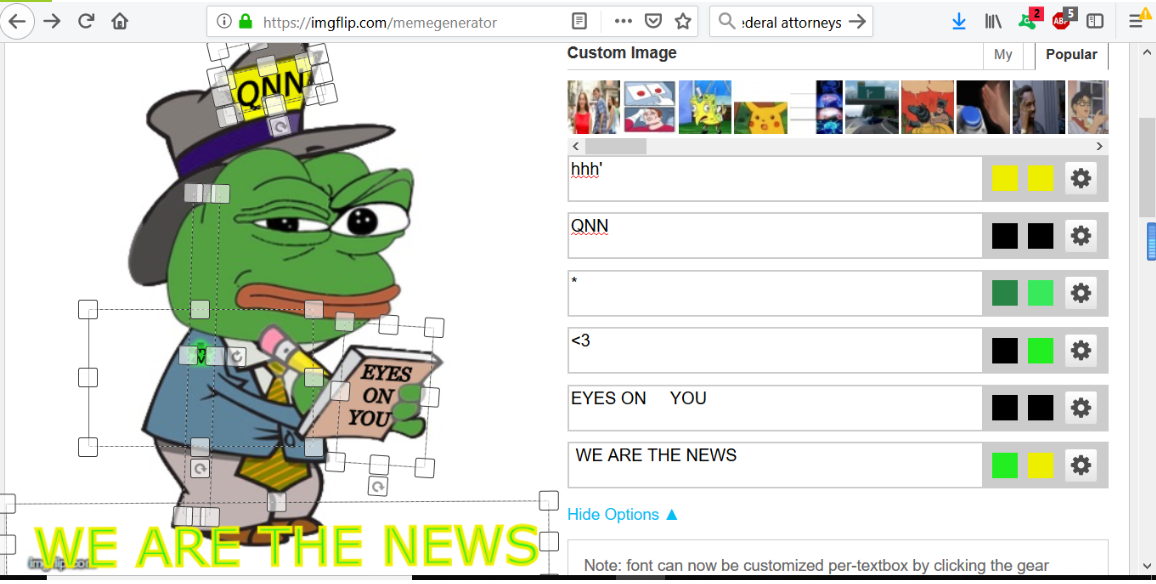 Upload the base image from your device or copy and paste the URL location of the image from the net.

At first you'll see two textboxes. Click on "Options" to add more as you find you need them. The gears are settings menus for each text box.

Think of each text box as a layer stacked on top of one another. With your cursor over the image all the text alignment boxes appear. Move your cursor off the image and they disappear so you can see your work.

Box 2 - Choose font/color/Fshadow off = QNN. Slide in position over box 1

Box 3 - Asterisk * is base for the patch on shoulder. Note I used two colors to give detail. Adjusted Fshadow size

Box 5 - Note space between on and you. Used space bar to adjust word position on back of Pepe's notepad

Box 6 - Choose font/color and type it in

Looks good? Click generate meme. Right click on meme and save to your device or right click and "copy image Location" and go paste it into your email or post (kudos Enigo54), or click the settings button to return to editor to fix something or make another variation.

Play with it to learn it. Enjoy! 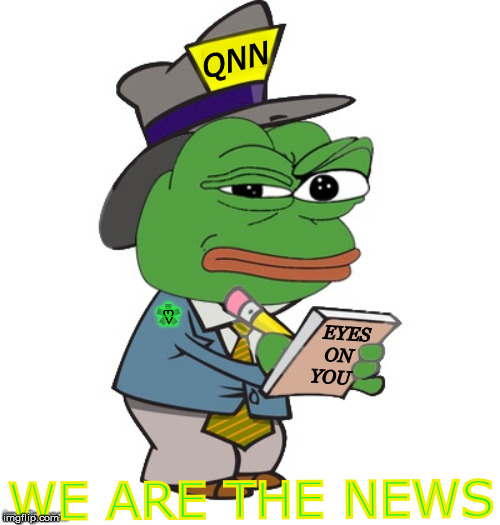 In my opinion, “except 1” is martial law.

“For the life of me, I can’t fathom why tribunals would be needed to deal with these corrupt and possibly treasonous cops.”

Perhaps because the courts (FISA) were involved as well? Can we have the Supreme Court hearing a case about crimes of a court that is hand selected by the Chief Justice? I don’t know, but it seems there is a conflict of interest there. The same could be said about crimes committed by the federal law enforcement and department of justice. Do they get to try themselves?

“I like that. Gowdy chose not to stay in Congress for a reason.”

I’ve always thought Gowdy was and is pretty solid. I know he’s gotten hammered every which way at times here. I saw him as a “doer”...wanting to get things done the right way and by way of the process in place. That process he worked under wasn’t very conducive to “getting scalps.”

I sensed him as being extremely frustrated with the system. His hands were tied, he had to deal with a-holes, wankers, tossers, villainy and scum in his respective committees. I’ve always said, if I were in that position, I MIGHT last five minutes as some noob’s teeth would be flying across the chamber floor, and none would be mine!

I think he longed to set things right, and literally found the means to do so when Team45 came along. Remember, Q said Qowdy is a patriot, and I have believed for a darned long time that these tribunals were going to offer a vehicle for Trey Gowdy to do what he ideally set out to do when initially running for Congress.

I envision Trey being a very, very high up civilian operator in these tribunals. And I have (#nohomo) dreams of him coming before the cameras someday soon and delivering a summary play-by-play of “who, what, when and where” at Gitmo and what has gone down do date so far. Of course, Trey’s revelation to us all will be delivered with no notes. The dude knows his stuff.

Apology if someone already said this, but could [Except 1] be a message not to us but to the DS. Could it be telling them that to avoid exposure ending it through suicide was their only option.

She is a foreigner, but also is an unlawful combatant according to LOAC. She can be charged with a war crime, tried, convicted and executed. Or just greased in a foreign land without all the expense. #NoLegalRightToWageWarUnlessaCountry

I’m really behind and very late on this thread but I wanted to thank you for posting RR’s speech. That was a great one. I’ve suspected that RR and RM are both not black hats. I think we’ll all know soon enough.