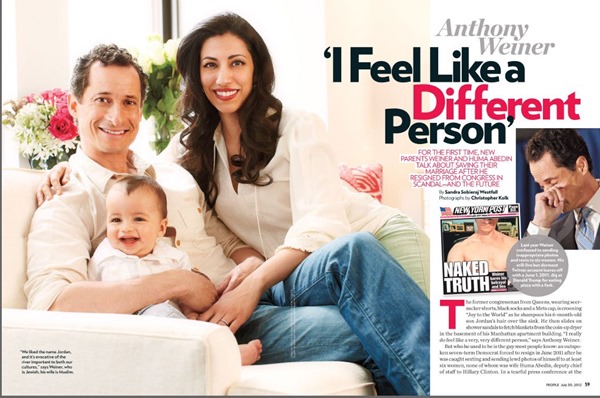 Yeah, butt no. Apparently it’s till the same Little Tony. 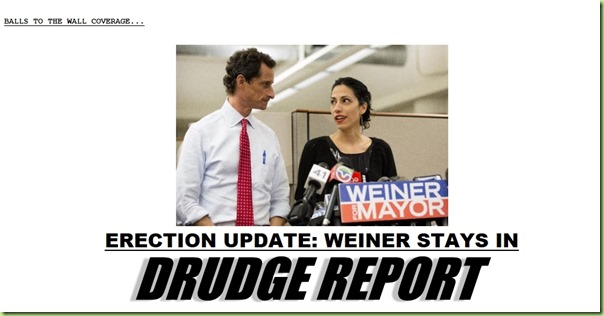 Weinergate II: The Weiner Continues to Wag the Dog.

It doesn’t seem possible; has it already been 2 years since the last Weiner roast? My, how time flies when you are apparently having fun, fun, fun.

After adamantly claiming for days that he did not have sext with that woman, what’s her name, Anthony Weiner finally admitted that he did indeed sext his pecs... along with other miscellaneous anatomical assets to several women; both prior and subsequent to his marriage to Huma (who couldn’t make it to the press conference due to a previous engagement).

Some people were perplexed that Huma not only came to yesterday’s press conference where Big Tony had to acknowledge that Little Tony had been wagging again, butt smiled broadly and stood by her man. It’s easy people: she wants to be FLONYC (First Lady of New York City); and later, following in her mentor’s shoes, Secretary of State.

As a homage to the Obama Age of Excuses I would like to submit this summer rerun: it serves the purpose of explaining why both the Little Weiner and the whole Country have slipped free of their moorings…

Months ago, the European press already projected that Weiner would be the next NYC mayor.

I bet they sit around all day trying to come up with new headlines..

And once New York elects Weiner Mayor, you can bet they will still continue to think the rest of the country is full of nothing but a bunch of ignorant rubes.

It occurred to me today that the Mrs. name is

She was out shopping for a big kielbasa.

He said in the first press conference that he wasn’t going to stop doing it when he said “There will be more to come out.” We just weren’t listening close enough.

And now you know why Huma uses her maiden name!

The MSM is gushing over Huma’s “performance” yesterday.
They love the spouses of cheatin’ Dems.
Huma will drown her sorrows via superhuman labor on the Hillary 2016 campaign.

The weiner-meister strikes again. I have so many negative thoughts running through my head, I hardly know where to begin. One is: Why would New York put this man in charge of their city? Are they all gluttons for punishment? Why is his wife STILL married to him? Part of her culture of being a second class citizen to the male in her life? Why do Dung-o-crats never resign when they have shamed themselves? I DO know the answer to that one: They have no honor. Period.