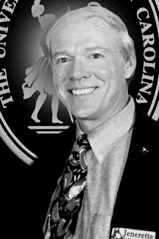 Van Jenerette served as a Policy adivisor to U.S. Rep. Henry Brown, 1st Congressional District, South Carolina and as a Congressional Staff Assistant to U.S. Rep. Arthur Ravenel, Jr., 1st Congressional District, South Carolina. Jenerette was a candidate for the 1st District Congressional seat in the 2000 election. Jenerette did his Doctoral studies as a Ph.D. Candidate at the University of South Carolina, where he has also taught Sociology, and has done post graduate studies at the College of Charleston in Political Science and Public Administration. Van has taught Political Science and Sociology as a full time faculty member at Southeastern Community College, and has taught Social Theory, Social Structures, Social Problems and Minority Group Relations at Coastal Carolina University. Van also has been a teacher at the Chabad Academy in Myrtle Beach under Rabbi Doron Aizenman. He is a U.S. Army veteran; he has studied four languages and has lived in three foreign countries including Korea and Japan. In 2002 he was inducted into the U.S. Army Officer Candidate School Hall of Fame at Fort Benning, Georgia. He is the father of six children. In July 2007 Van was listed as one of the "55 of the Smartest, Most talked About College Professors" at Online College Degree web site. 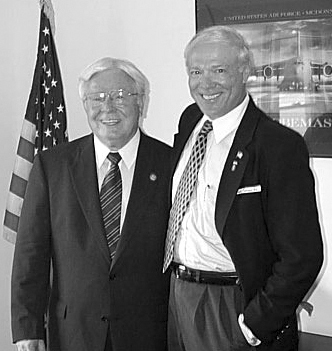 U.S. Army Command & General Staff College, Ft. Leavenworth, and has both education and experience in counterguerilla and counterterrorisim tactical operations. Van has had a tour of duty with the United Nations Command and has served with allied officers from the Middle East, Africa, Asia, and the United Kingdom. (photo on left: U.S. Congressman Henry Brown, Jr. 1st District, South Carolina)

Van was recognized as one of the five finalists for the 1997 and 2005 North Carolina Teaching Excellence Award and received a NISOD Excellence Award from The University of Texas at Austin in 1998 and in 2005. Van was selected for the Southeastern Community College "Outstanding Faculty Award," in both 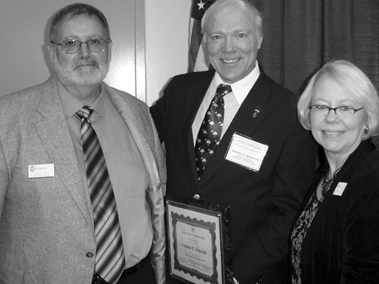 Van has been invited to speak in many forums. Most recently he has been a featured speaker on U.S. foreign policy in the Middle East and the Islamic Framework of International Conflict and Terrorisim on three occasions since the 9/11attacks. Van spoke in Washington, D.C. on "American Foreign Policy and Worldwide Force Deployment in Asia on the Korean DMZ, " in June 2001. He was a keynote speaker at the National Racial Deliberation Day Conference, Rider University, NJ, in 1997. Van also has been a guest host of conservative Talk Radio programs, an invited speaker at the Halifax Community College Diversity Forum 2000 and he was the keynote speaker at the South Carolina State Capitol in Columbia on the Bill of Rights Day commemoration in December 2000 and at the FREE REPUBLIC Annual Conference 2001 at Seabrook Island S.C. on "The US Constitution and the Rule of Law." and his treatise on "Bibles & Gunpowder: The foundations of the American Revolution." He has authored numerous articles and journal pieces and is currently working on a book, "Myths, Lies, Truth and Politics: Ingredients of a New American Society" and is co-authoring a book, "Against all Enemies Foreign and Domestic: The Sons of the American Revolution in America's Civil War " with his wife, Katherine.

Van is an athlete, a scuba-diver and a runner who has competed in every distance from the mile through the 26-mile marathon. While in the Army, he competed in the 1990 U.S. Army Europe Track and Field Championships. Van is an active member of the American Mensa society. Prior to joining the Army, Van was the lead singer with the band Silent Noise in Hollywood California who recorded with Ken Handler's Canterbury Records; group members included Dunyea West, David Holloway, Russ Haney, Peter Serrano, and Lou 'Looch' Hyland.

Van had a distinguished military career. Enlisting as a private in 1967, he served a combat tour as a Recon Scout with an Infantry Battalion on the Korean 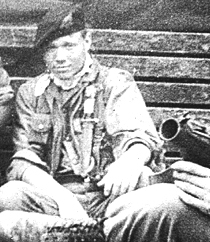 DMZ during the USS Pueblo Crisis. He rose through the enlisted ranks to Staff Sergeant, saw duty as a Drill Instructor at Fort Knox and received a commission as an Infantry Lieutenant after attending Infantry OCS in 1972 at Ft. Benning Georgia.

Van is a graduate of the U.S. Army Command & General Staff College, Ft. Leavenworth, the 7th Infantry Division Counterguerilla Warfare School, the U.S. Army Infantry Officers Advanced Course and the Defense Information School Officers Course. Van served fourteen Army tours and his assignments included duty with the 1st Special Forces Group (ABN), Okinawa; the United Nations Honor Guard Contingent, Korea, which included service with United Kingdom British and Ghurkha forces and duty with the 1st Infantry, 2d Infantry and 7th Infantry Divisions. He has published papers and been involved in research on a wide range of military topics ranging from Post War Combat Operations along the Korean DMZ; Women in the Military - A Study on Female Generals; Basic Training and Female Recruits; Army Families; Service Member Retention; The Social Impact of Base Closures and The Erosion of Veterans Benefits.

Van Jenerette's family has a long history of military service. He is a direct descendant of Sgt. Elias Jeanerett who served with the Colonial Artillery at Ft. Moultrie in 1776. 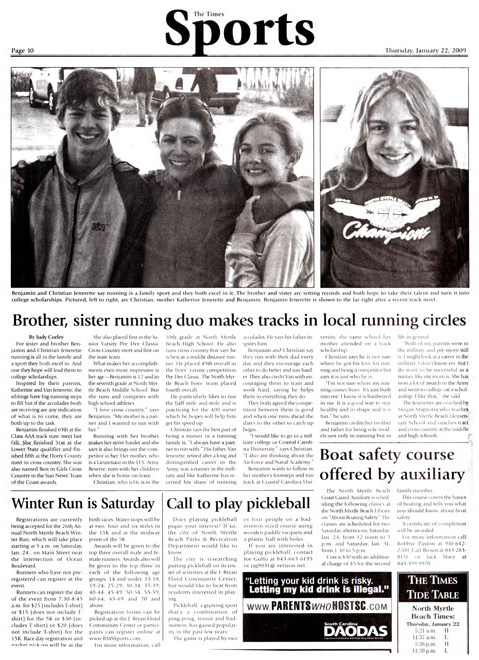 His great-great grandfather, Samuel Jenrette of Horry County, served in the Civil War with Manigault's Battalion of South Carolina Artillery and his father served on a B-17 Bomber in World War II with the 8th U.S. Army Air Force. Van and Katherine's son, Christian, is in U.S. Army ROTC at Coastal Carolina University.

Today both Van and his wife Katherine are active members of VFW POST 10804. Van is also a member of the American Leigion, The Retired Officers Association, The National Association for Uniformed Services and the Korean DMZ Veterans Association. Van's awards and decorations include the Meritorious Service Medal, the Armed Forces Expeditionary Medal, and the 7th Infantry DMZ Combat Badge. Van is also recipient of the Department of Defense's Thomas Jefferson Award. Van completed his service in 1991 with the rank of Major, Regular Army, Infantry.

Van Jenerette is married to Katherine Schmidt who was a Republican Candidate for the U.S. Congress, 1st Congressional District, SC. Katherine is a Commissioned Officer serving in the U.S. ArmyReserve and is an Army Paratrooper; and served with the US Army 3d Armored Division in Operation Desert Storm in the Persian Gulf War. She is a graduate of the U.S. Army's Airborne school at Ft. Benning, Georgia. Katherine served as an aide and Field Representative to U.S. Rep. Henry Brown, 1st Congressional District, SC. and has taught 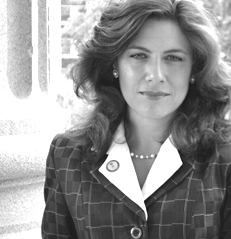 American History and Western Civilization for Southeastern Community College and the American Military University. She received her Bachelors Degree in History from USC - Coastal Carolina Campus and holds a Masters Degree from USC - Columbia. She is currently working on a book about her experiences during the Persian Gulf War, "The Desert and the Storm: Recollections of the Gulf War." Her post graduate school work includes ongoing research of the NOTITIA DIGNITATUM - a Latin manuscript written during the 5th century A.D. about the ROMAN ARMY and MILITARY units, their disposition and 'order of battle' during the period of the late Roman empire. Katherine presented her initial research at theUniversity of South Carolina Second Annual Late Antiquity Symposium - held in Columbia, South Carolina in May 1998. In 2004 Katherine was a candidate for the South Carolina Senate and scored an upset victory in Horry County nearly unseating one of the most powerful 'Good-old-boy' Democrat Senators in the state. Katherine missed sending Senator Dick Elliott(D) into retirement by a mere 1880 votes out of over 30,500 votes cast in a race that would have mader her the only female Republican Senator the state of South Carolina. The votes from Dillon, Marlboro and Marion Counties gave incumbent Senator Elliott a slim victory. (campaign map link)

Katherine was a member of the North Myrtle Beach Planning Commission, served as the CEO of the Myrtle Beach Area Hospitality Association and has been a volunteer on many campaigns including Senator Arthur Ravenel, Jr.'s bid for Governor of South Carolina and North Carolina's U.S. Senator Elizabeth Dole's campaign as well as North Carolina U.S. Congressman Robin Haye's successful re-election to the U.S. House of Representatives.

Katherine and Van have four children.(photos below: Christian , Benjamin, Drake and Wilson )

Van has been widely published, given lectures and talks and has cited in a variety of topical areas ranging from the Korean DMZ War, Women in The Military Studies, Christianity and American Government, and Inter-Racial Issues. In October 2001 - just weeks after 9/11, he authored an article titled "Will the Real Islam Please Stand Up?" which was read world-wide and generated a number of responses, including 'threats' from Radical Islamists and was anonymously quoted as the 'central theme' to a speech by distinguished Ithaca Professor Asma Barlas given at Yale University in February 2002.