Proud Mother of a US army soldier.

Some of my of my heros of today

Freeper Ceegar Man US Marine Staff Sgt. Nick Popadich from Indianapolis, Ind., of the 3rd Battalion, 4th Marines Regiment, enjoys a cigar standing on top of his tank, as he arrives at a main crossroad in downtown Baghdad, Wednesday, April 9, 2003. A statue of Iraqi President Saddam Hussein is in the background. (AP Photo/Laurent Rebours)

US marines with 2/5 Marines watch the results of the US presidential elections in Ramadi, 100 kms west of Baghdad.(AFP/Patrick Baz)

US Marines of the First Division arrest Iraqi men at the railroad station in Fallujah, Iraq, as U.S. Army and Marine units pounded the city with air strikes and artillery Tuesday, Nov. 9, 2004. U.S. and Iraqi units roared into the insurgent stronghold of Fallujah through a breach near the railroad station at dawn Tuesday. (AP Photo/Anja Niedringhaus)

Battle rages in centre of Falluja 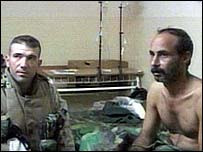 U.S. Troops Occupy All of Fallujah

U.S. Marine Maj. Gen. Richard Natonski stands at the bridge in the western part of Fallujah, Iraq, where the bodies of two American contractors killed by militants were strung up in March, sparking the earlier U.S. siege, Sunday, Nov. 14, 2004. (AP Photo/Anja Niedringhaus)