We here highly resolve that these dead shall not have died in vain—that this nation, under God, shall have a new birth of freedom—and that government of the people, by the people, for the people, shall not perish from the earth.

- Abraham Lincoln (from the Gettysburg Address)

If my people, who are called by my name, will humble themselves and pray and seek my face and turn from their wicked ways, then will I hear from heaven and will forgive their sin and will heal their land.

I am impelled to write you concerning the responsibilities laid upon you to live as Christians in the midst of an unChristian world. That is what I had to do. That is what every Christian has to do. But I understand that there are many Christians in America who give their ultimate allegiance to man-made systems and customs. They are afraid to be different. Their great concern is to be accepted socially. They live by some such principle as this: "everybody is doing it, so it must be alright." For so many of you Morality is merely group consensus. In your modern sociological lingo, the mores are accepted as the right ways. You have unconsciously come to believe that right is discovered by taking a sort of Gallup poll of the majority opinion. How many are giving their ultimate allegiance to this way.

But American Christians, I must say to you as I said to the Roman Christians years ago, "Be not conformed to this world, but be ye transformed by the renewing of your mind." Or, as I said to the Phillipian Christians, "Ye are a colony of heaven." This means that although you live in the colony of time, your ultimate allegiance is to the empire of eternity. You have a dual citizenry. You live both in time and eternity; both in heaven and earth. Therefore, your ultimate allegiance is not to the government, not to the state, not to nation, not to any man-made institution. The Christian owes his ultimate allegiance to God, and if any earthly institution conflicts with God's will it is your Christian duty to take a stand against it. You must never allow the transitory evanescent demands of man-made institutions to take precedence over the eternal demands of the Almighty God.

This is what the LORD says to you: `Do not be afraid or discouraged because of this vast army. For the battle is not yours, but God's. 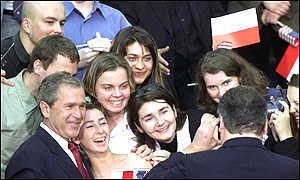 Before they were utterly defeated by the King of Poland, Jan III Sobieski, at the Battle of Vienna in 1683, the followers of Muhammad had laid seige to Vienna in their attempt to "convert" and conquer Europe.

Here was their declaration and widely published prayer (sound familiar?):

Eternal God and creator of all things, and thou O Mahomet his sacred and divine prophet. We beseech thee let us not dread the Christians, who are so mean and silly to rely on a crucified god. By the power of thy right hand, so strengthen ours that we may surround this foolish people, on every side, and utterly destroy them. At length fulfill our prayers and put these miscreants into our hands, that we may establish thy throne for ever in Mecca, and sacrifice all those enemies of our most holy religion at thy tomb. Blow us with thy mighty breath like swarms of flies into their quarters, and let the eyes of these infidels bedazelled with the lustre of our moon. Consume them with thy fiery darts, and blind them with the dust which they themselves have raised. Destroy them all in thine anger. Break all their bones in pieces, and consume the flesh and blood of those who defile thy sacrifice, and hang the sacred light of circumcision on their cross. Wash them with showers of many waters, who are so stupid to worship gods they know not: and make their Christ a son to that God who ne're begot him. Hasten therefore their destruction we humbly entreat thee, and blot out their name and religion, which they glory so much in, from off the face of the earth, that they may be no more, who condemn and mock at thy law. Amen.

And, here is an excerpt from the King of Poland's letter to his Queen, after the Battle:

.....The Rarities which were found in the Prime Vizor's Tent, were no less Numerous than Strange and Surprising, as very curious Parrots, and some Birds of Paradise, with all his Banios, and Fountains, and some Ostriches, which he Chose rather to Kill, than let 'em fall Alive into our Hands; Nay his Dispair and Jealousy transported him so far, as to Destroy his very Women for the same Reason.

The whole Army Attributes the Glory of this Victory to God, and Us, and all the Princes of the Empire, with the Great Officers, as the Dukes of Bavaria and Lorrain, Prince Waldek, etc. were so far transported with my Valour and Success, that their Thanks and Praises were more Numerous, than was their Fears before; and Count Staremberg the Governour, Saluted me with the Title of his Mighty Deliverer. The Common People in my going to and from the Churches, pay'd their Veneration even to my very Garments, and made their Cry's and Acclamations reach the Sky, of Long Live the King of Poland.....

In the battle we Lost some of our Friends, as Prince Halicki, and the Treasurer of our Household. The Reverend Marinus Daviano, heapt on me his Pray'rs and Blessings, and told me he saw a White Dove fluttering o're the Army, which he look'd upon as an happy Augure of our Victory.....

Thanks be to Heaven, now the Half-Moon Triumphs no longer o'er the Cross, And 'twas thrown down from St. Stephen's Steeple in Vienna (whom it had o'retopt so long) immediately on the Defeat: Neither have the Turks any occasion to upbraid us with their Blasphemous Mahometan Proverb: Ye Christians where is Your God?

After the Battle Jan Sobieski entered Vienna in glory. The King and his Polish army had won lots of fame after their victory. Jan III Sobieski was not only looked upon as the savior of Vienna, but as a savior of the whole of Europe from the Ottoman Turks.

Two headless statues of Lenin, lying in a salvage yard in Vilnius, Lithuania.

Get a GoStats hit counter