Check out my blog: smithsk.blogspot.com

Interested in a thriller, which goes up against a corrupt US president and his covers-ups?

His Tribe of One

Updated edition and paperbook now out! Please feel free to check it out!

Dr. Nova Orlovic has many doubts about President Lincoln Todd’s version of her husband’s death. Educated as a scientist and lawyer, Nova smells a cover-up. Stonewalled and threatened, the "Chief", as Nova is known—she’s half Cheyenne, goes on the warpath against the Todd Administration.

With help from a trusted advisor with long reaching connections, Nova assembles a team of Brits including a Royal Navy medical officer, Commander Reginald Barrett, to get to the bottom of it. During their expedition, the Commander and the Chief annoy each other until mutual respect bonds them. But when they stumble upon evidence that could take down the powerful, will they manage to make it out alive?

Book Two is out! Counting Coup

Paperback and eBook! Please feel free to check it out!

Dr. Nova Orlovic, known as "the Chief" - she's half-Cheyenne - is on the warpath again. After her team uncovered the inconvenient truth as to how her second husband had died, President Lincoln Todd circles his wagons in major damage control. And it's payback, bigtime, for the Chief when she's indicted for the murder of her first husband eleven years ago.

Then a tyrant, eager to rebuild his weapons of mass destruction, gives Nova an offer she can't refuse. In exchange for her expertise in nuclear physics, he tempts her with new revelations about both her husbands' deaths, perhaps clearing her name. But by "counting coup" with her enemies on both sides of the ocean, will the Chief lose the Commander, her latest love, as well as unwittingly unleash the dogs of war?

Book Two is out! Peacemaker 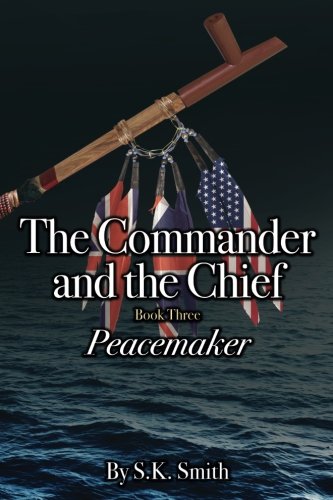 Paperback and eBook! Please feel free to check it out!

The adventures of British Commander, Reginald Barrett, and Native American “Chief,” Nova Orlovic, continue as they take on new political intrigue and mysteries.

Part Serbian, part Cheyenne, Nova opened up a Pandora’s Box when her team uncovered the inconvenient truth behind the death of her husband, a revered war hero. Foul play pointed to President Lincoln Todd. Yet clever politician Todd spun the narrative in his favor while international powers manipulate him to do their bidding. Meanwhile, a psychic convinces the First Lady that Nikola Tesla sent papers with alien technology to Nova’s grandfather during World War II. The First Lady embarks to recover them from Nova, Enemy Number One on the Todd Enemies List.

As the Commander used his medical skills to keep Nova alive during her expedition, he now uses them to sleuth dead men’s secrets. But at his best friend’s wedding in Wyoming, the confluence of superstition, old feuds, and international intrigue peak in this version of Close Encounters of the Weird Kind.

Check out - The Forbidden Book and the Upside Down Kingdom series:

Anastasis - Even the Dark Ages could not extinguish the light.

Apokalupsis - The Apokalupsis – the revelation of Jesus Christ – shakes up the old order in the Dark Ages.