Warning: Use of the words "meme," "paradigm," or "disrespect" (as a verb) are grounds for removal from these premises. If you prefer "Not so much" to a simple "No," you're not likely to feel welcome here.

Self-employed software developer, dad, husband, and physicist gone bad. The greatest hero in my own life is my father. Skeptical of everything: especially the idea that there is (or is not) a God. Nevertheless hanging on to Mother Church in the hope she'll bring me home.

Translation for those lunatics currently running the asylum: cisheterowhitetechnophilepatriarch; and not the least bit ashamed of it.

I have seen the future, and it is Zimbabwe:

And they make fun of Dan Quayle. Duh.

It is a common observation here that our cause is the cause of all mankind, and that we are fighting for their liberty in defending our own.
--Benjamin Franklin [Never more true than in AD 2008]

Founder and High Priest of the Church Zarguna, Scientist.
We believe God created the universe to impress Jodie Foster. We have some metaphysical and teleological problems, but we're working through them (kind of like the Episcopalians, except we're serious, and our numbers are pretty steady).
Now where the hell is my tax deduction?

Not making an odious comparison. Just a statement of how damaging the cult of personality has been to the cause of democracy:

I'm the air you breathe.
Food you eat.
Friends you meet,
In the swarming street.

Like David Horowitz and some of the people on this board, I got here the hard way: from the far left.

As a shop steward, business agent and labor organizer I bought into all the mythologies of the left, and then one evening in the early 1980's I had an epiphany when a visiting professor from East Germany told me and a number of friends at a party for the SEIU that all the guys in the Solidarity Labor Union should be marched in front of firing squads and shot. And from the that night on it became more and more clear to me that lefties make a lot of noise, but they really don't care about working people at all.

Every Rebel guerrilla and jayhawker, every man who ran to Canada to avoid the draft, every bounty-hunter, every deserter, every cowardly sneak that ran from danger and disgraced his flag, every man who loves slavery and hates liberty,... and every villain, of whatever name or crime, who loves power more than justice, slavery more than freedom, is a Democrat.
--James A. Garfield, 1866

"Necessity is the plea of every infringement of human freedom. It is the argument of tyrants, it is the creed of slaves."
~William Pitt, 1783

The constitutions of most of our States assert that all power is inherent in the people; ...that it is their right and duty to be at all times armed. "
-- Thomas Jefferson

A great man speaks out prophetically about September 11, 2001:

Our Enemy has chosen war. Now, he will get all of it he can stand.
--William Tecumseh Sherman

You cannot qualify war in harsher terms than I will. War is cruelty, and you cannot refine it; and those who brought war into our country deserve all the curses and maledictions a people can pour out. I know I had no hand in making this war, and I know I will make more sacrifices to-day than any of you to secure peace.
--William Tecumseh Sherman

At a time like this, scorching iron, not convincing argument, is needed. --
Frederick Douglass

It is not blasphemous to observe that God's gifts are wonderful, and undeserved, but they are often more terrible than His punishments.
--J.R.R. Tolkien [was Tollers talking about my kids?]

Of all tyrannies, a tyranny exercised for the good of its victims may be the most oppressive. It may be better to live under robber barons than under omnipotent moral busybodies. The robber baron’s cruelty may sometimes sleep, his cupidity may at some point be satiated; but those who torment us for our own good will torment us without end, for they do so with the approval of their own conscience.
C.S. Lewis

To compel a man to furnish contributions of money for the propagation of opinions which he disbelieves and abhors, is sinful and tyrannical.
--Thomas Jefferson: Statute of Religious Freedom, 1779

John Kerry's assault on this country did not rise fullblown in his mind, like Venus from the Cypriot Sea. It is the crystallization of an assault upon America which has been fostered over the years by an intellectual class given over to self-doubt and self-hatred, driven by a cultural disgust with the uses to which so many people put their freedom. The assault on the military, the many and subtle vibrations of which you feel as keenly as James Baldwin knows the inflections of racism, is an assault on the proposition that what we have, in America, is truly worth defending.
--William F. Buckley, Jr., commencement address at West Point, June 8, 1971

The precept of the Koran is perpetual war against all who deny that Mahomet is the prophet of God. ~John Quincy Adams

There is no person so determined, as a person determined to be wrong.~Fred Zarguna

Extremism in the defense of liberty is no vice; moderation in the pursuit of justice is no virtue. ~Barry Au-H2O

From the "You-Just-Can't-Make-This-Kind-of-Sh!t-Up Department:"
"A few of the signs had the very pithy 'Freedom Isn't Free.' Well, I'm sorry, but the very definition of freedom is that it is free. Freedom is a birthright of every American, and we have the Bill of Rights to prove it. Nowhere in the Constitution does it say that our young people have to fight insane wars for greedy swine to earn anyone any kind of freedoms. If freedom wasn't free it would be called 'expensivedom.' -- Cindy Sheehan -- perhaps the most brutally average icon the moonbat left has ever owned. And that's saying something.

Now Lord, let Your faithful servant depart in peace. He stood athwart history, yelling "Stop!" How many of us would have been slaves--or ashes--had he not? 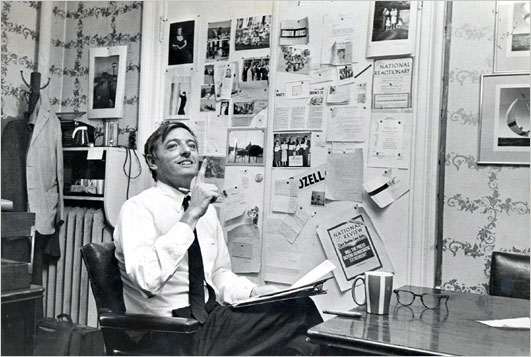 The only thing standing between Rand and Buckley was God. As a believer, but a skeptic, I have no problem with a homepage that embraces them both.

We close with a brief message for liberals, progressives, SJW's, Democrats, and various other scumbags who occasionally read FReeper Home Pages to profile us on their idiotic blogs: