I joined FR when I saw that a bunch of guys sitting around in their pajamas could do more for this country than the research department at CBS. Thanks for helping me find hope again.

I have survived two of the most liberal schools in the country - Columbia University and Northwestern, where I learned the ways of the enemy. I have used that knowledge ever since to debunk, demystify and discredit their attempts at propagandizing Americans through the MSM, movies, and other media. I have a Masters Degree in Film and Video production, and I now use it to make training for the Navy so they can put missiles on the bad guys and make them uncomfortable.

I'm a big fan of the water, and go sailing as often as I can in Hampton Roads and the Chesapeake Bay on my little SlowBoat. Every time I'm out there, I look at the Navy base and thank God that those ships and the good people who sail them are on our side. 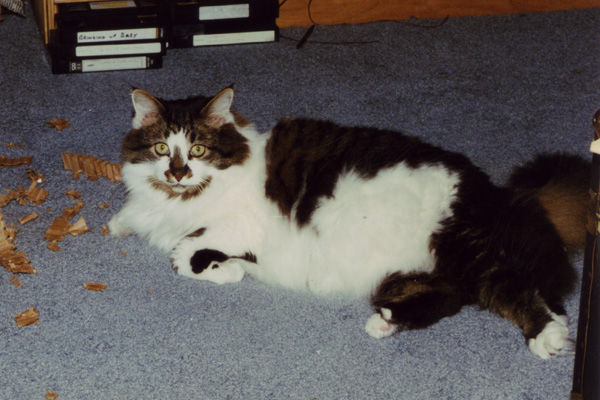 Don't make this Viking Kitty get up. It will be the beginning of a very bad day.

"The goal of Islamists is the application of Islamic law," - Daniel Pipes

A living insult to Islam since 1959

Truth is the new lie

The best stuff happens just before the thread snaps

What is our exit strategy from the war on poverty?

"The Dawning of the Day"
Trad.
Lyrics by Mary Fahl
This morning early I walked on
while my darling was in a dream
The last sweet days of summer bloomed
and dressed the trees in green
Then soaring high in the gleaming sky
from far across the bay
came a fearsome roar from a distant shore
at the dawning of the day

Then I called my men to follow me
knowing well that the view was dim
Though tired and worn, how they fought all morn'
as time was closing in
And my heart was sad though sore with pride
for brave lads all were they
As the angels fly, how they climbed so high
on the dawning of the day

But the edge is moving nearer now
inside the fading sun
and calling, calling out to them
my brothers, one by one
But only dusty silence sounds
The ashes float away
as the twilight ends and the night descends
'til the dawning of the day

Forgive me love, I'm going now
so very far away
When darkness falls, only think me near
and do not be afraid
And please don't grieve when I am gone
Abide in what remains
'til the shadows end and we meet again
on the dawning of the day

For when shadows end,
we shall meet again
on the dawning of the day