My mother used to say often when warning us about carefully choosing our friends that, "Birds of a feather flock together." Did you ever see a cardinal flying with vultures? Well, maybe that isn't the best example since so many cardinals these days are, in fact, vultures. And, sadly, Pope Francis has placed many of these evil men in important positions at the Vatican. Let's check out a few.

Sorondo countenances the worst moral evils as was evident recently at the Biological Extinction meeting. He happily legitimizes enemies of the Church and life itself by offering them platforms for spreading their poison, like Paul Ehrlich who advocates forced abortion. Their response is to chortle in glee over this wise, merciful, and insightful pope whom they see as a realist.

The cleric named by Pope Francis to head the Pontifical Academy for Life and the Pontifical Pope John Paul II Institute for Studies on Marriage and Family gives every evidence of being a homosexual or at least a man fascinated by homosexual erotica. It was Paglia who commissioned a shocking mural for his cathedral by Ricardo Cinalli a homosexual painter (I can hardly call him an artist unless gay porn is an art form) who features male genitalia in his pictures and has one painting that apparently depicts John the Baptist since it's a man's head on a platter next to the head of a bull. The two have intertwined tongues.

That any priest of God would choose such a painter to decorate his cathedral should be a cause for his immediate removal. Even worse, however, Cinalli says, “There was no detail that was done freely, at random. Everything was analyzed. Everything was discussed. They never allowed me to work on my own.” Which leads one to presume that Paglia approved the appearance of Jesus' genitals which are clearly visible through his robe.

Cinalli and Paglia met at least three times a week, he says, and the bishop never approached the issue of salvation. Since Jesus takes all the sinners to heaven without repentance, what need is there to urge conversion?

We should be relieved, I suppose that the archbishop drew the line at the painter depicting couples copulating -- a true guardian of the faith, eh? Paglia chose Cianlli from a list of ten painters so one also can presume that he was shown a portfolio of Cinalli's work. While I don't recommend viewing Cinalli's pictures (If you do, pray the St. Michael the Archangel prayer first!), one presumes this is the kind of material Paglia reviewed before commissioning the homoerotic mural.

And by the way, Paglia features the rainbow prominently on his coat of arms.

Pope Francis personally chose retired pro-homosexual Cardinal Danneels who covered up hundreds of cases of clergy sex abuse to attend the Ordinary Synod on the Family in October, 2015. Danneels is known as a dissenter from Church teaching on a number of issues including same-sex marriage, abortion, and scandalous sex education for children. He was part of the clerical St. Gallen's "mafia" that conspired against Benedict and to elect Pope Francis.

What is the relationshiop between Francis and Luigi Ciotti who is a proud promoter of homosexuality? Look at the picture of Ciotti holding hands with the pope (click on link). Is this the normal way a cultural Hispanic relates to other men? I don't think so. It's just one more bizarre episode in the Pope Francis soap opera.

As I write this I can't help thinking that the slander against Pope Pius XII who was called "Hitler's pope" would be more accurately applied to Francis since he gives legitimacy to the enemies of the Church and apparently approves of letting them spread their moral evils from the bully pulpit of Vatican City. Pray for the pope and for the Church. We are clearly in evil and dangerous times. 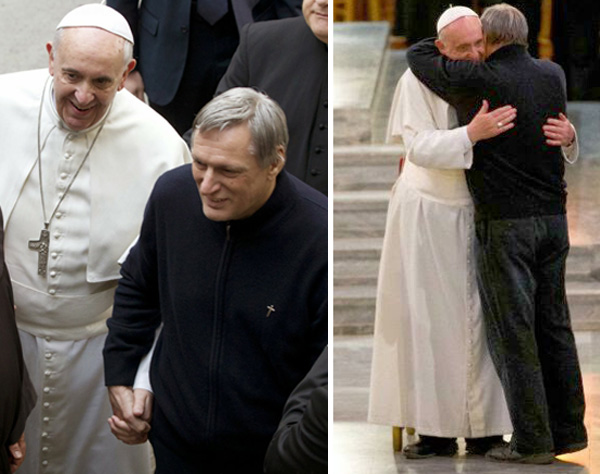 The Pope is not my friend, so I feel pretty good about myself.

Lay down with dogs etc.

His friends are Muslims . . . so what does that make him?

among many other things.