Actor Terry Crews Stood His Ground Again Over Fourth of July Weekend; He has chosen a hill to die on
Townhall ^ | 07/06/2020 | Cortney O' Brien

Terry Crews has chosen a hill to die on. It's not a hill that would normally be controversial, but in the year 2020 everything seems to have a political bent to it. Crews tweeted the fact that there are bad eggs in every race - including white and black. But he will be friends with anyone of any color if they are simply kind people. What he ultimately wants, is harmony.

And the actor says he's received "threats" for voicing that reasonable opinion.

Are all white people bad?

Are all black people good?

Knowing this reality- I stand on my decision to unite with good people, no matter the race, creed or ideology.

Given the number of threats against this decision-

"It's an overly simplified message that fails to acknowledge the reality of prejudice in society," one critic said.

Others just called Crews cruel names such as the "n" word, "Uncle Tom" or "Uncle Terry."

He had been fielding hateful messages for a few weeks. In early June he tweeted his first "controversial" statement about the state of race relations in America, suggesting that activists not be so hostile toward white people.

People called him "ignorant." But unlike so many other celebrities bullied into apologizing for harmless remarks, he refused to apologize for his message. In fact, he's continued to share his common sense, albeit unpopular, sentiments.

"If you are a child of God, you are my brother and sister. I have family of every race, creed and ideology," he wrote on the Fourth of July. "We must ensure #blacklivesmatter doesn’t morph into #blacklivesbetter."

BLM activists and supporters condemned Crews for "missing the point" about their movement. One woman said Crews was "developing into an enemy of the people." Another called him "worthless" and said that white people can "have" him. But Housing and Urban Development Secretary Ben Carson came to the actor's defense, likening Crews's words to those of Martin Luther King, Jr.

"What did he advocate for? A color-blind society," Carson said on Fox News. "He said 'I dream of a time when people will be judged by the content of their character and not the color of their skin.'"

Social media is the curse of our age. People need to learn to ignore the social media mob.

“In a time of deceit telling the truth is a revolutionary act.”
- George Orwell 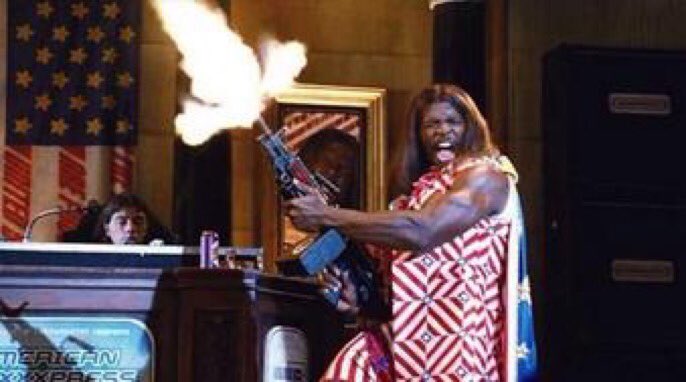 i will stand with terry crews...

but not too close.

Guaranteed that most of those threats are coming from young white people living with their divorced or never-married moms.

From my old stompin’ grounds in Flint, Michigan.

Way to go, Terry. We’re proud of you!

We watch Americas Got Talent where Terry is the host.

Sickening to see so many people that have a problem with him making what appear to be very reasonable (and logical) statements. Too bad our so-called “leaders” can’t do more of what Terry is doing and say these same types of things. That’s what the country needs to come together.

My new saying for my Liberal Democrat Fiends:

I believe in MLK
NOT BLM

Learn just a few lines of his “I have a Dream Speech” and watch Liberal heads explode.

“I have a dream that one day this nation will rise up and live out the true meaning of its creed — we hold these truths to be self-evident: that all men are created equal.”

“Let us not seek to satisfy our thirst for freedom by drinking from the cup of bitterness and hatred.”

“In the process of gaining our rightful place we must not be guilty of wrongful deeds.”

At a local restaurant, my husband and I were celebrating our anniversary of a long enduring and happy marriage....
...the waiter commented on it.....

When I entered the restaurant I caught the eye of a mom with her family and smiled......she tentatively smiled back

As we were eating this mom and her child hesitatingly approached our table and very gently inquired about our anniversary and wanted to know our secret
Without hesitation my husband said....’God’s Grace’.......and meant it.
We thanked the lady for stopping by!
She was very sweet and shy.

After she left, my husband teared up...( he’s a sweet softie)....and when I asked why.....he said with all the race turmoil lately, folks like her are ignored or even dismissed ......because we’re still hurt from the loud few who are violent and destructive

As we left the restaurant I thanked her again for her kindness....she was with her husband and two cute children
They were very appreciative that I even stopped by.....
Sad that it has come to this

God bless this courageous man and his family.

No one of right mind and heart can disagree with what he’s saying.

The racial grievance people are howling at him.

Aw Shucks! Ya beat me to it! GMTA!

Indeed. But that's a little hard to fit on a Bumper Sticker!