Republican members of a U.S. House committee want to know “the science and information” the Gov. Tom Wolf administration used in requiring long term care facilities to accept people who have been hospitalized with COVID-19 or otherwise potentially exposed.

Pennsylvania “forced the nursing homes to take seniors who are COVID positive from the hospital back into thed nursing home, even knowing they couldn’t properly take care of them. It was a death sentence for thousands of Pennsylvania seniors,” U.S. Rep. Steve Scalise of Louisiana said Tuesday.

However, U.S. Rep. Scott Perry, who hosted a briefing on the subject Tuesday, said he knew of no specific instances of Pennsylvania nursing homes being forced to take patients they felt they couldn’t care for.

Nor would the CEOs of two major associations representing long term care providers in the state say whether they knew of facilities being forced to take people against their will, or whether they believe the policy may have killed thousands.

The issue centers on a directive from the President Donald Trump administration in March saying long term care facilities can and should accept everyone they would normally would -- but only if they feel capable of safely caring for them, and can take infection control steps such as putting them in quarantine if necessary.

“There are critical legal differences between the words can, should and must,” Perry said.

Scalise and four other Republicans have sent letters to Wolf and governors of New York, Michigan, California and New Jersey asking for data and information related to their decisions.

They allege those five are the only governors in the U.S. who forced nursing homes to take people who had been in the hospital with COVID-19 or who may have been exposed to the disease. They further say those states had the highest percentages of their total COVID-19 death tolls concentrated among long term care residents.

As of Tuesday, 4,539 deaths of long term care residents had been attributed to COVID-19 in Pennsylvania— 68% of the state’s total. The Wolf administration disputes that sending people from hospitals to nursing homes contributed to major infection spread or deaths.

Across the U.S., COVID-19 has taken its heaviest toll in long term care facilities, where the typical resident is elderly and has underlying health conditions making them highly vulnerable to becoming seriously ill or dying.

Experts say the combination of medically frail people living in close quarters in facilities which are often understaffed and often struggle to control infections during normal times became a recipe for disaster when COVID-19 hit.

Scalise said his group is focusing on Pennsylvania and the four other states because of their high per capita rates of COVID-19 deaths among long term care residents. But the source of their data was unclear during the online briefing, and a Perry staffer didn’t respond to a request for clarification.

A recent analysis by The New York Times ranked Pennsylvania fifth-highest for its percentage of COVID-19 deaths involving long term care residents. The leading states are New Hampshire, with 80%; Rhode Island and Minnesota, each with 77%; and Connecticut, with 73%, according to the Times.

Still, several of those are small states that didn’t face outbreaks as intense as did Pennsylvania.

According to the Times, the percentages of deaths involving long term care residents in states surrounding Pennsylvania is: Ohio, 57%; Maryland, 61%; New Jersey, 44%; and New York, 21%.

Asked for comment regarding Perry’s briefing, a Pennsylvania Department of Health spokesman referred to previous statements on the subject by Wolf and health secretary Dr. Rachel Levine.

Levine was asked about Republicans’ letter on Monday and said there is no “evidence” the requirement contributed to deaths. Rather, she pointed to experts who say the prevalence of COVID-19 within any facility is a direct result of the prevalence within the surrounding community, with infected staff who didn’t know they are infected bringing it inside.

She said states and facilities across the country are dealing with the same problem.

Wolf, in a recent interview with PennLive, accepted some blame, but defended the decision to put the highest priority on keeping as many hospitals beds as possible open to deal with an expected surge of COVID-19 patients. He tied that goal to the policy of discharging people who no longer needed hospitalization to long term care facilities.

“That was a reflection of how dire the straits we were in... All this was going on as we were trying desperately to build inventories of treatment facilities, protective equipment, that kind of stuff, as quickly as we could. But I think you almost have to say you’ve got to start with the health care system because that’s the first point of contact with anybody who gets this disease,” he said.

Levine has also stressed that her department responded to and worked closely with facilities that felt they lacked ability or supplies to control infections and adequately care for residents. The state has said its efforts include about 2,300 shipments of masks and other protective equipment and deploying the Pennsylvania National Guard to about three dozen facilities.

Still, reporting by news organizations including SpotlightPA has documented likely flaws in the state’s response. These include a decision not to quickly and fully carry out a plan to send strike teams to struggling facilities.

The nursing home industry has been critical of Wolf, saying he failed to sufficiently address severe shortages of supplies and staff needed to respond to COVID, and that guidance from the state has been confusing, with the state also threatening criminal action.

Zach Shamberg, CEO of the Pennsylvania Health Care Association, which represents long term care facilities, declined to say if he knew of specific instances of homes being forced to take people against their wishes.

He said in an emailed statement, “Given the differing guidance released by the federal government and state officials, and absent clear direction, we advised our members to accept COVID-positive patients only if they were able to procure the appropriate PPE, create COVID-specific treatment areas and establish appropriate staffing units to care for those residents, with health and safety being the top priority.”

His email said “some facilities received significant pressure from their local hospital to accept patient transfers without ensuring a negative COVID-19 test before the transfer took place.” It also said 749 people who had been hospitalized for COVID-19 were admitted or readmitted to Pennsylvania nursing homes during one week in late May.

Shamberg didn’t respond to the question of whether he believes the situation may have contributed to large-scale deaths, or whether Pennsylvania facilities wanted Wolf to create alternate facilities to care for such patients.

Scalise and Perry said the solution was for Pennsylvania to create such facilities.

Denise Menio of the Center for Advocacy for the Rights and Interests of the Elderly said lack of “transparency” by the state and the homes makes it impossible for her to know if homes were forced to take people they didn’t feel they could care for, and whether it led to deaths.

Regarding the claims of widespread deaths made by Perry and Scalise, she said “I have no idea where that is coming from.”

Still, she was highly critical of what she called a major lack of transparency on the part of the state on assorted things related to long term care facilities, and said the state has given unclear and sometimes contradictory guidance to facilities.

“It has just been so many issues. Right now we just don’t know what’s happening, unless we hear anecdotally from families or residents themselves,” she said. “There certainly have been missteps at all levels.” 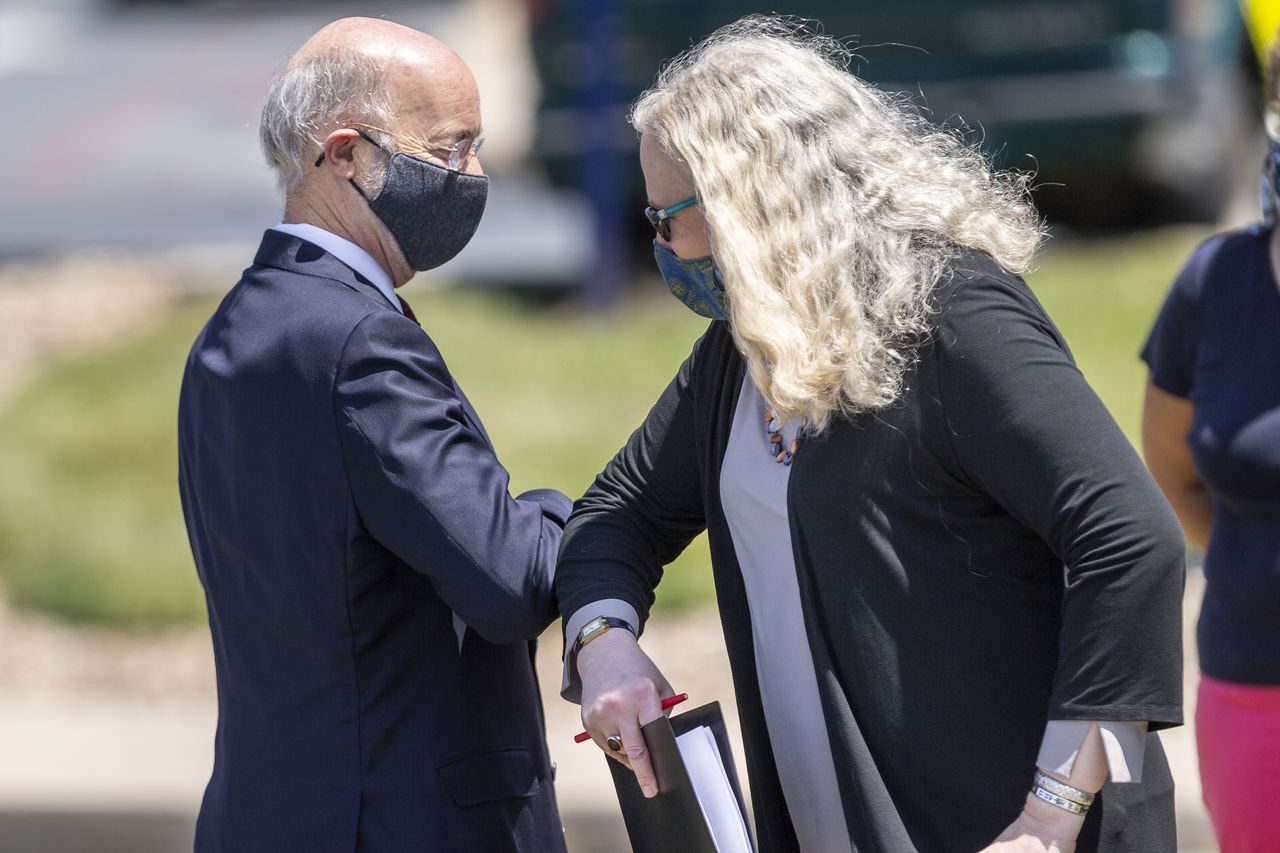 What I don’t get is weren’t the additional field facilities for overflow?

They're good at that. It's the doing things part that they suck at.

Of course it did, and it was intentional.

Gets rid of “useless eaters” as Hitler called them, and makes the hoax pandemic look real.

It’s good for the economy of old people(non-contributing) die off. They just won’t say it but putting these people amongst the most vulnerable says enough.

May have killed??? Weak knees bastards

How about it is FACT that the various state governors who issued edicts that nursing homes accept COVID-19 patients KILLED, not “may have,” KILLED those most vulnerable to COVID-19!!!!!

I wonder how many were state funded thus getting rid of lots liabilities.

Not just put, ordered with threats of loss of license and fines.

That’s the sort of question that needs asking.

I can’t believe we are still questioning the reasoning behind the Depraved Indifference exhibited by these leftist politicians sending nursing home patients to their death. This was a BUDGET^ and Cost Control measure, almost ALL of the Dead Nursing Home Patients were Public Charges and they saved the Taxpayers Millions of Dollars so the Politicians can now Boost their Retirement Plans.

NO ONE has been arrested.

who care about the LOST civil rights of the murdered??

the pussy GOP is KNOWINGLY enabling this to occur
and is complicit in the murder,
and the repeats SURE to come.

18 posted on 07/01/2020 9:51:47 AM PDT by Diogenesis
[ Post Reply | Private Reply | To 1 | View Replies]
To: lightman
Scalise and four other Republicans have sent letters to Wolf and governors of New York, Michigan, California and New Jersey asking for data and information related to their decisions.

Those numbers have been buried or so obscured that whatever is produced will be meaningless.