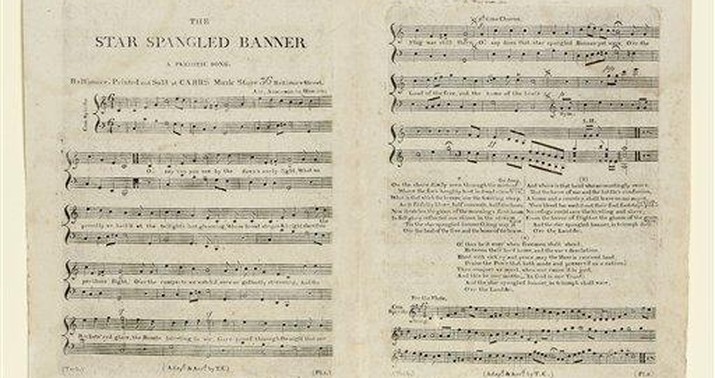 Should the US pick a new national anthem — and is the Star Spangled Banner too problematic in our woke times? It’s not a new demand, and in fact isn’t even a new argument, so it’s hardly surprising to see it emerge in the social unrest surrounding the police killing of George Floyd. Yahoo News music editor Lyndsey Parker says it’s time to replace the Francis Scott Key poem with something more appropriate for our enlightened times, but replace it with what?

That’s where this runs off the rails:

In an increasingly antiracist era when problematic iconography — ranging from Aunt Jemima and Uncle Ben to even the Dukes of Hazzard General Lee car and country band Lady Antebellum’s name — is being reassessed, revised or retired, America’s national anthem, “The Star-Spangled Banner,” seems to be striking a wrong note.

Last week, protesters in San Francisco toppled a statue of the song’s composer, Francis Scott Key, a known slaveholder who once said that African-Americans were “a distinct and inferior race of people, which all experience proves to be the greatest evil that afflicts a community.” This week, Liana Morales, an Afro-Latinx student at New York’s Urban Assembly School for the Performing Arts, refused to sing “The Star-Spangled Banner” at her virtual graduation ceremony, explaining to the Wall Street Journal, “With everything that’s happening, if I stand there and sing it, I’m being complicit to a system that has oppressed people of color.” Instead, Morales performed “Lift Every Voice and Sing,” a hymn widely considered to be the “Black national anthem.”

So, is it time for this country to dispense with “The Star-Spangled Banner” and adopt a new anthem with a less troubling history and a more inclusive message? Historian and scholar Dr. Daniel E. Walker, the author of No More, No More: Slavery and Cultural Resistance in Havana and New Orleans and producer of the documentary How Sweet the Sound: Gospel in Los Angeles, says yes.

“The 53-year-old in me says, we can’t change things that have existed forever. But then there are these young people who say that America needs to live up to its real creed,” Walker tells Yahoo Entertainment. “And so, I do side with the people who say that we should rethink this as the national anthem, because this is about the deep-seated legacy of slavery and white supremacy in America, where we do things over and over and over again that are a slap in the face of people of color and women. We do it first because we knew what we were doing and we wanted to be sexist and racist. And now we do it under the guise of ‘legacy.’”

The specific issue with Key is his personal history on slavery, as well as the third stanza of his poem, which rarely if ever gets performed. (Most performances stick with just the first verse.) The third stanza castigates “the hireling and slave,” which — depending on your point of view — either references the freed slaves fighting on the British side in the War of 1812 or the British navy’s “impression” of Americans into their service:

And where is that band who so vauntingly swore,
That the havoc of war and the battle’s confusion
A home and a Country should leave us no more?
Their blood has wash’d out their foul footstep’s pollution.
No refuge could save the hireling and slave
From the terror of flight or the gloom of the grave,
And the star-spangled banner in triumph doth wave
O’er the land of the free and the home of the brave.

The meaning of this stanza is hotly disputed, but it has long been a sore spot for those who take its meaning as triumphalism over slaves. That is certainly a valid point for a debate, but it’s hardly the only argument for dumping Key’s poem as the national anthem. Michael Kinsley offered more convincing arguments in 2009, especially on the difficulty of performing it, but he did also include the third-stanza issue:

“The Star-Spangled Banner” is notoriously unsingable. A professor of music, Caldwell Titcomb of Brandeis, pointed out years ago in the New Republic that its melody spans nearly two octaves, when most people are good for one octave, max. The first eight lines are one enormous sentence with subordinate clauses, leaving no really good place to take a breath. There are far too many mandatory leaps off the high board (“. . . what so PROU-dly we hail . . .”).

The melody is lifted from an old English drinking song. The lyrics are all about bombs and war and bloodshed — and not in a good way. By the penultimate verse, the song has turned really nasty: “No refuge could save the hireling and slave/From the terror of flight or the gloom of the grave.” In the first verse — the one we generally sing — there is only one reference to any value commonly associated with America: “land of the free.” By contrast, “home of the brave” is empty bravado. There is nothing in the American myth (let alone reality) to suggest that we are braver than anyone else.

As I wrote at the time, except for that whole rescuing-Europe-from-itself-twice-without-territorial-acquisition thing. That wasn’t evident in 1812, perhaps, but it’s more apropos now, especially after winning the Cold War and finally rescuing eastern Europe from totalitarianism. Overall, though, our national anthem is not just unsingable for most people, it’s not terribly inspiring except as a long tradition of being the national anthem. That tradition only started in 1916 when Woodrow Wilson decreed it, and that Democratic president had his own issues on race, along with free speech, constitutional order, and … well, lots of issues, really.

So what should replace it? Parker has a couple of ideas, one of which is … awful:

So, if “The Star-Spangled Banner” goes the way of the Confederate flag and Gone With the Wind, what should America’s new national anthem be? Whatever it is, Walker says there should be a formal “vetting process” to make sure the next anthem doesn’t have a terrible past; Powell, for his part, suggests John Lennon’s “Imagine,” which he says is “the most beautiful, unifying, all-people, all-backgrounds-together kind of song you could have.”

That’s absurd. “Imagine” is a nihilistic song that fantasizes about a world where nothing matters at all. How does that speak to a national identity based on liberty, freedom, and self-governance through the rule of law? Not only does it literally have nothing to do with an American vision, it explicitly asks people to “imagine there’s no countries,” which is the antithesis of a national anthem.

Parker has another idea, which is a vast improvement on her first but still misses the mark:

But what about “Lift Every Voice and Sing”? That song, written as a poem by James Weldon Johnson in 1900, set to music by his brother J. Rosamond Johnson in 1905, and first publicly performed as part of a celebration of Abraham Lincoln’s birthday by Johnson’s brother John, was dubbed “the Negro national hymn” by the NAACP in 1919. In more recent years, it has been referenced in Maya Angelou’s 1969 autobiography I Know Why the Caged Bird Sings and Spike Lee’s 1989 film Do the Right Thing; it was also performed in 1972 by Kim Weston as the opening number for the Wattstax festival and by Beyoncé during her celebrated 2018 Coachella set.

At least this song does have some relation to a national identity, but … it never mentions the nation at all.

If we need a new national anthem at all, why not choose a song that is explicitly about the United States? “America the Beautiful” is a well-known song, one that is occasionally performed in place of the Star Spangled Banner and relatively easy to sing. Lee Greenwood’s “God Bless the USA” would be a popular choice, or perhaps “God Bless America,” the Irving Berlin song made most famous by Kate Smith. “The Battle Hymn of the Republic” explicitly focuses on freedom and the defeat of slavery, for that matter. Shouldn’t our national anthem speak to our patriotic feelings about the United States in some manner, and our yearning to make a more perfect union?

I’d be happy to have a debate over it, but perhaps after our current wave of nihilism has passed first. Unfortunately, “Imagine” is the perfect song for this particular moment in time. Let’s leave the last word to the late, great Ray Charles who had his own way of expressing his love of our country, as imperfect as it was and is:

CLICK ABOVE ARTICLE LINK FOR THE RAY CHARLES VIDEO

No way. A person has to read the history of the Star-Spangled Banner and how many men died holding the flag aloft!

Check it out on your own

I sort of like what we have. I have heard complaints that it is difficult to sing. But I like it!

Just because it is old is no reason to change. If it ain’t broke, don’t change!!!

I wish I was in the land of cotton...

It is in no way "problematic"

My Grampa used to say “Give em an inch and they’ll take a mile.”

Since they’re turning this into an alternate reality, this is our new anthem:

I agree. Repalce with the Dark Town Strutter’s Ball or Dixie, or any Steven Foster tune. Sarc/

Its a major diss to King George and the brits. Never forget.

NEVER FORGET. The blood of patriots founded this country. after decades of trying to work with the monarchy, being rejected and pressed harder and harder.

God Bless America works for me.

Hell, let’s just have a clear flag, so NO 9NE is “offended”, a Tofu Turkey, and play the “Cotten Eyed Joe” at all American events.

And probably the only national anthem in the world that does so, at the end of the first stanza it asks a very good question:

O say does that star-spangled banner yet wave
O’er the land of the free and the home of the brave?

Just because Ed can’t sing it...