To: USA Conservative
Let us acknowledge Sean Hannity's irreplaceable contribution to unmasking the Russia hoax, to exposing the FBI in the DOJ, to exposing Moeller and his gang, for defending the president in impeachment. His ensemble team was very effective and Sean himself was tireless in his crusade.

But why, oh why, cannot Sean Hannity shut up enough to let his interlocutor speak? When will he learn that a question should not be much longer than a simple declarative sentence instead of consuming more time than allocated to the guests for an answer? Why cannot he have some intelligent young intern write out the questions for him instead of treating his listeners to a wandering dialogue over irrelevant issues before he manages to pop the question like a nervous suitor?

When will he learn to stop informing us of his personal upbringing or his personal predilections? When will he cease to inform us of his martial arts expertise? In other words, when will he stop expecting us to view the world through the prism of his eyes only and grant us our own experiences?

When will he learn that if he intends to persuade he should persuade on one issue at a time and not throw multiple allegations against the wall. Let the circumstances of the issue persuade on their own.

It is no surprise the Tucker Carlson is leading in the ratings race and I suspect he is in the process of transforming television news.

Excellent! Every time I see that old Confederate dude, I know there’s something there that’s worth reading!

8 posted on 06/18/2020 3:31:05 AM PDT by Fresh Wind (China kills over 400,000 and the sheeple sleep. Cops kill one person, and cities burn.)
[ Post Reply | Private Reply | To 7 | View Replies ]
To: nathanbedford
But why, oh why, cannot Sean Hannity shut up enough to let his interlocutor speak? When will he learn that a question should not be much longer than a simple declarative sentence instead of consuming more time than allocated to the guests for an answer?

I believe the answer is: Hannity's ego.

Yes, he has done some good things for the Conservative cause. But like Glenn Beck, he wore out his welcome a long time ago.

These days, Hannity's personal life is a mess.

He left his wife, and is now trying to get into the pants of the twice divorced Ainsley Earhart.

You have to wonder how long their "harmless flirting" went on. 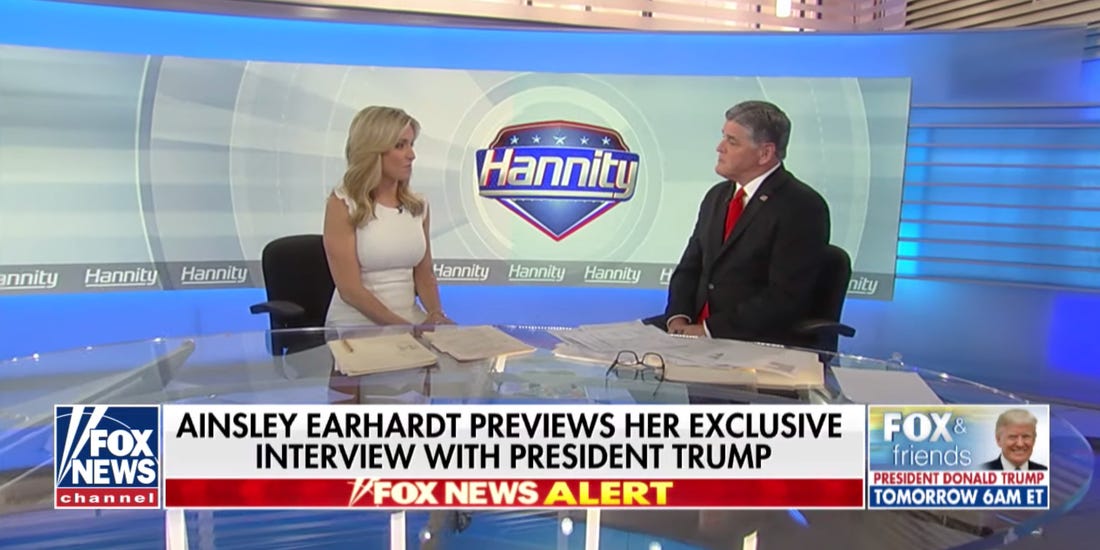 In other words it's not one against one.

I agree with all you say about Hannity.

Did you know he does martial arts?

Did you know his mother was a prison guard?

I got about a million more and yeah, he needs to stop making the world revolve around him.

If you want to torture yourself try to listen to Sean on the radio, it can't be done for more than a few minutes.

Did you know that Sean is a martial arts expert within 7 different disciplines?

Did you know that Sean is _____ Ainsley Earhardt? It is his business, but he tells us everything else that he does, trains with an expert, works out 5 times a week, goes to Walmart etc.....

Your whole statement articulates what we think everytime Hannity is on. Maybe if he drops below Tucker and Laura, he will gain some humility and open his eyes to what we all see and try to improve his game. Repeating a useless long litany that he already wasted our time with in his first question to guests we want to hear, like President Trump last night, is foolish. Its like he thinks his audience is completely uninformed and stupid, and he sprinkles in a generous dose of narcisism. Heart in the right place. Wish he would up his game, he has good guests and is not afraid to take on the machine.

So well stated. I am so tired of Hannitus Interruptus, or Vannity, for short.

Did you know he thinks that 99% of the FBI are good guys? And he wears a pin on his lapel to show that?

I never missed his show while he was exposing the DS through his guests, Solomon and Carter. It was always informative to hear 2/3 of what they had to say.