President Donald Trump reacted to the news on Sunday that Sen. Mitt Romney was currently isolated after spending time with Sen. Rand Paul who tested positive for the virus.

Romney’s office said Sunday the senator would self-quarantine after learning that Sen. Rand Paul had tested positive for the virus, noting that he had spent time with Paul and that the attending physician ordered him not to vote on the Senate floor. 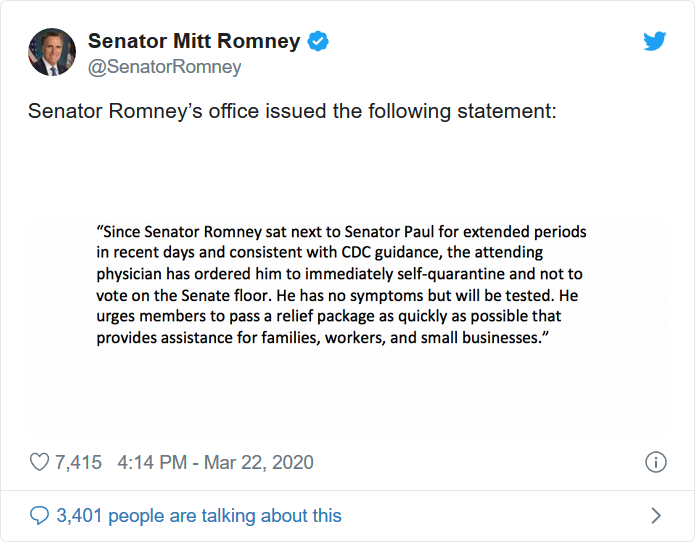 Mr present just stay away from the gotcha type questions

Reporters are among the most ignorant of Americans

>>the attending physician ordered him not to vote on the Senate floor.

4 posted on 03/22/2020 7:12:56 PM PDT by a fool in paradise (Everyone knows Hillary was corrupt, lied, destroyed documents, and influenced witnesses. Rat crime.)
[ Post Reply | Private Reply | To 1 | View Replies]
To: E. Pluribus Unum
We have to have remote voting. Do it by video conferencing so everything is out in the open.

What owuld our forefathers have done? Sent a rider with the vote to the Congress.

It would be a really bad thing if Pelosi and Schumer tested positive, wouldn’t it? I mean, they are both really old and all that.

Once this bastard to vote.

the dems are all on quinolone

For someone who's supposedly not politically correct Trump's being kind of a wuss.

Not really. When everything is running smoothly he can be a politically incorrect as he wants, and most of us will give him a pass. Now during a crisis he’s being Presidential.

Pres. Trump is healthy and in control, he can afford to be magnanimous

Who knows, maybe Romney will actually start acting not like an enemy

I believe the president. Sarcasm would be completely out of place. After all, Donald Trump himself could easily be infected with COVID-19.

I have to say Trump seemed to smirk. It was kind of obvious and it could get play and it could hurt him. A very bad optic the reporter followed up which actually helped Trump but it was there.

Did you see it live? He may as well have winked at the reporter when he said “none whatsoever”.

That is too bad. I will be wishing Mitts the best.

I hope that I do not have to raise a flag half staff.

CMC* guidelines: Anything Trump says can and will be used against him. Twisting, adding, and deleting words is to be SOP.