PARK CITY, Utah - - Since losing the 2016 election to Donald Trump, Hillary Clinton has released a memoir about that defeat, launched a political action committee and penned another book about “gutsy women” with her daughter, Chelsea. But Clinton’s most prominent return to the public eye has come in the form of a new candid four-hour documentary series.

Some, Clinton is aware, thought she would slink away after 2016.

“Yes, they did, didn’t they?”says Clinton. “Well, that was never an option.”

Nanette Burstein’s “Hillary,” which Hulu will debut Friday, is a more direct and long-form portrait of Clinton than has ever been done on camera. You might say it’s a bid for Clinton to reassert her legacy, to tell the story of a career and life that, she feels, has often been falsely distorted.

Clinton’s return to the spotlight, in the midst of a competitive Democratic primary, has already caused waves. In the documentary, she disparages Sen. Bernie Sanders, saying, “Nobody likes him. Nobody wants to work with him.” It’s a small moment — 15 seconds, Clinton points out — from some 35 hours of conversation recorded more than a year ago when she wasn’t thinking about the 2020 election. She was thinking about the 2016 election.

“I will do whatever I can to support that person, because that wasn’t my experience in 2016,” says Clinton.

I would have LOVED to be in that room on Election Night 2016.

she made a documentary, wrote a book... and will still not remember when she is deposed by judicial watch.

(your choice here)::(your other choice)

Initially, that just seemed like a threat to conservatives. Now it is a threat to everyone - Dems and Republicans.

She causes me ups and downs.

A throw UP and DOWN the toilet it goes.

I wonder if Nanette asks her why the “world’s smartest woman” couldn’t pass the bar exam?

I'm not sure why I thought of that.

(Although I completely agree with your intent.)

“Gutsy women”? She has a lot of guts and rolls.

Like she'd ever admit to a "down". She's a legend in her own mind. I don't recall her ever taking any responsibility for her loss. A Clinton always has somebody to blame.

"No, Supreme Leader, anything but that! I'll take being blown apart by anti-aircraft artillery."

LOL, a great alternative venue was the Showtime Election Night special hosted by Stephen Colbert. It was about the most hilarious two hours of live TV I have ever witnessed. They had planned this as a victory party for Hillary, but the mood turned really dark as the votes came in.

18 posted on 03/03/2020 1:55:43 PM PST by Night Hides Not (Remember the Alamo! Remember Goliad! Remember Gonzales! Come and Take It!)
[ Post Reply | Private Reply | To 3 | View Replies]
To: Night Hides Not
That evenings talking head shows was pure gold. I still relish the lamenting of the women... 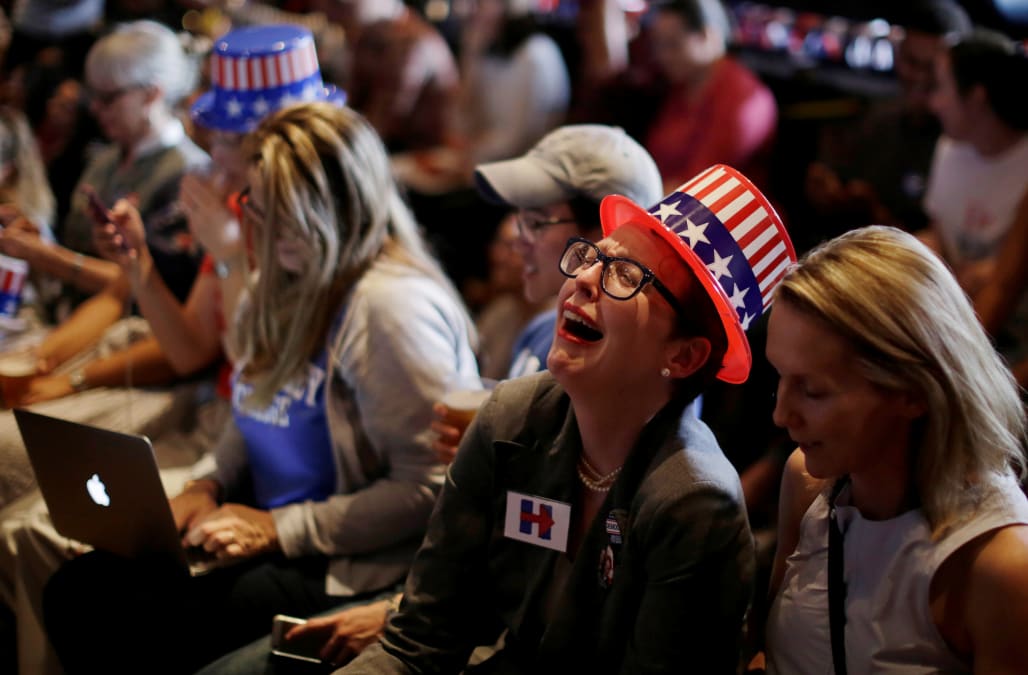 19 posted on 03/03/2020 1:58:53 PM PST by Magnum44 (My comprehensive terrorism plan: Hunt them down and kill them.)
[ Post Reply | Private Reply | To 18 | View Replies]
To: Oldeconomybuyer
Clinton, who beat Trump in the popular vote, favors the abolition of the Electoral College. “The person who gets the most votes should win,” she said. “The Electoral College is an anachronism that foils the rights of the majority of Americans to choose our leaders.”

Even with who knows how many illegal aliens votes, as well as other forms of likely Dem vote fraud, Mrs. Clinton did not even reach a majority of the votes counted in the election.