On Saturday, San Francisco voters elected the son of two former Weather Underground murderers to serve as their District Attorney. The voters deserve all the hell that is about to break loose.

Progressive candidate Chesa Boudin wants to free criminals but prosecute police and ICE agents for doing their jobs. It's no surprise Boudin hates cops so much. His parents did, too. Kathy Boudin and David Gilbert were terrorists in the Weather Underground who murdered two police officers and a security guard during a 1981 robbery of a Brinks armored security car outside New York City.

There should be a law that children of terrorists who share their parents' worldview are barred from holding public office, especially the role of the chief law enforcement officer. Boudin's dad is still in prison so he can't kill any more cops, but his mother is out. Naturally, she is an assistant professor at Columbia University .

After his parents killed the cops, Boudin was sent to live with two other terrorists, Bill Ayers and Bernardine Dohrn. Dohrn declared war on the United States and was on the FBI's Most Wanted list. Ayers bombed the Pentagon, the U.S. Capitol building, and the New York City Police Department before he and Dohrn became fugitives and went into hiding. The pair eventually came out of hiding and settled in as university professors.

As district attorney, Boudin plans to decriminalize crime and close down jails. He believes the criminal justice system is racist, and he plans to cut back on the time criminals serve under parole supervision, which he thinks is also racist. Boudin also wants to stop prosecuting gang members to the full extent of the law because he thinks that's racist, too. He thinks everything is racist.

Boudin plans to hand out U-Visas to immigrants like candy. U-Visas were originally meant for immigrants who could aid in the prosecution of crimes, but now they are rampantly misused and Boudin vows to misuse them even more. Boudin thinks every illegal alien is the victim of a crime committed by ICE and President Trump, so every immigrant will get a Visa. Boudin also wants to advocate on behalf of anyone in the United States facing deportation, including aliens who murdered cops like his parents did.

Boudin was endorsed by socialist Bernie Sanders, which somehow makes him seem less radical. But he isn't.

Just when you think it isn't possible, San Francisco gets a whole lot crazier. 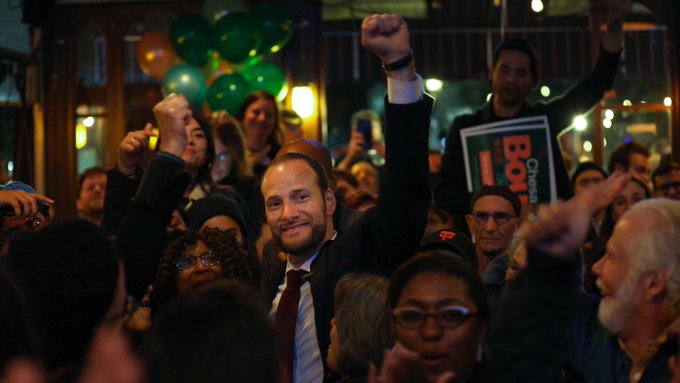 And, I thought you had forgot the satire tag. Lord help us and America.

You get the government you deserve...

And, I thought you had forgot the satire tag. Lord help us and America.

Matt 15:14 Let them alone: they be blind leaders of the blind. And if the blind lead the blind, both shall fall into the ditch.

Get out while you can.

People will reap what they sow...........that includes voters and we all will pay for it. God help us

Unfortunately, there are still folks in this area who praise and defend the original Black Panthers. So this is not a complete surprise. The average voter either never knew about Weather Underground, or decided to forget about them.

I learned about them in school. In my Civics Class.
Same with Students for a Democratic Society.
Don’t let the patriotic name fool you.
They too were Marxists.

Amen, and I’ll also add that the entire lot are scum.

29 posted on 11/10/2019 2:53:39 PM PST by jazusamo (Have You Donated to Keep Free Republic Up and Running?)
[ Post Reply | Private Reply | To 28 | View Replies]
To: jazusamo
The Bribks murders occurred at the old Nanuet Mall in Rockland county. Literally close to home. Goes to show the shyt never rolls far from the pigs.
Aside from the atrocity, Brinks was a, I HATE this smarmy phrase, teachable moment. That crime was perpetrated with ILLEGALLY OBTAINED FIREARMS. By felons who had no business being anywhere near firearms to begin with. Yet I don't recall one peep of outrage from the gun grabbers at the time. Not from Handgun control inc, or the Brady Campaign or any hack politicians or a-hole celebs, the same ones who were still screaming bloody murder over the shooting of John Lennon. They were quite conspicuous by their silence. I learned early on how the left thinks they're slick when it comes to picking and choosing their battles.
30 posted on 11/10/2019 3:02:47 PM PST by Impala64ssa (Virtue signalling is no virtue)
[ Post Reply | Private Reply | To 1 | View Replies]
To: jazusamo

Who cares. They are a swamp of crime, homosexuals, liberals, criminals, liars, cheats, idiots, idiots, fools, socialists, communists. One day, the BIG ONE is going to hit that cess pool and it will collapse in on itself and sink into hell. They are all in that fools land and they just do to each other. I don’t care what they do to themselves. They aren’t in my area, they are already in hell. I am in Heaven, my state of Alabama. Christian, Conservative, Patriot, Retired US Army, Vietnam Combat Veteran of the 4th Infantry Division.

How is that Calexit thing coming along?

Lord, help the other 49 states, California has sold out to the devil.

A Family friend is an attorney in Alameda County - the Chinese also refuse to identify criminals. When they are robbed by the Amish youths, they refuse to cooperate with law enforcement.

Headlines like this lead me to fear some populations are too far gone to ever be redeemed.

There is enough data available to persuade intelligent voters to reject radical district attorney candidates. And communism. It should not even to close.

But many in California - and elsewhere - can't run fast enough to embrace evil. I don't see how people like that will ever turn their life around.

Divine intervention is the only thing I can think of. With God anything is possible.

“”Maybe we should just saw off SF from the continent and let it drift out to sea.””

But not until Feinstein, Pelosi and Harris and Swallwell are back in the area....I know Swalwell is on the other side of the bay but sorry people, that’s got to go too! Have no idea where Harris hangs her hat..

Didn't know that. I guess that shows togetherness is not dead.

They could go on the leftist version of the old Saturday Evening Post Norman Rockwell covers. Filling empty grenades with powder, connecting bomb timers, planning bombings together using a big map on the dining room table.

There must be 50 or so police departments that can take 80% of the Frisco cops if they agree to leave all at the same time. Then see how those voters enjoy having National Guard troops with tanks driving down their streets.

Soros owns EVERY D.A. in the DNC cities.