The family that owns OxyContin maker Purdue Pharma used Swiss bank accounts to conceal the transfer of millions of dollars from the company to themselves, New York state’s attorney general contends in court papers filed Friday.

New York — asking a judge to enforce subpoenas of companies, banks and advisers to Purdue and its owners, the Sackler family — said it has already documented $1 billion in transfers between those parties.

Those transactions include millions shifted from a Purdue parent company to former board member Mortimer D.A. Sackler, prosecutors said in the papers. Prosecutors say Sackler then redirected substantial amounts to shell companies that own family homes in Manhattan and the Hamptons.

The filing, made in a New York court, follows decisions by that state and others to reject a tentative settlement with Stamford, Connecticut-based Purdue, announced this week, arguing it does not do enough to make amends for the company’s and family’s alleged roles in flooding U.S. communities with prescription painkillers.

TOPICS: Crime/Corruption; Extended News; News/Current Events
KEYWORDS: addictedamerica; deathpenalty; dopefiends; oxycontin; purduepharma; pushers; sackler Navigation: use the links below to view more comments.
first 1-20, 21-40, 41-56 next last
Don't know what to make of it. More inclined to believe the State of NY is trying to get it's hands on more of someone else's money.
1 posted on 09/13/2019 3:39:06 PM PDT by Rebelbase
[ Post Reply | Private Reply | View Replies]
To: Rebelbase

That is the default position of anything done by NY’s government. They are greedy, they are corrupt, they are not to be trusted. Don’t know what to make of it. More inclined to believe the State of NY is trying to get it’s hands on more of someone else’s money.

“Don’t know what to make of it. More inclined to believe the State of NY is trying to get it’s hands on more of someone else’s money. “

Have you done any research on the Sacklers?

No, but you obviously have. Enlighten me, please.

Now let's take look at opioid deaths in the USA over time: 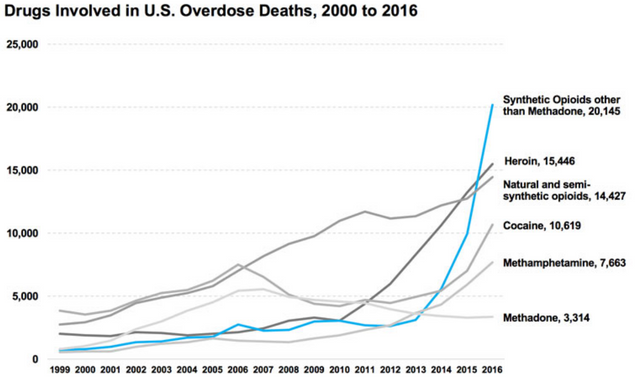 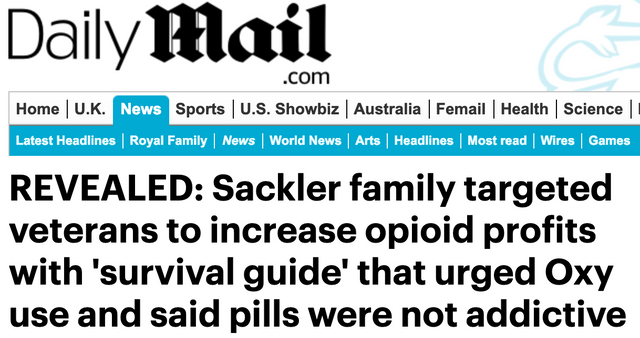 Shameful, huh..? In view of such evil ambition, I wonder how profitable opiods are, huh..? The Sackler family owns an incredible 1/3 of the entire legal opiods market and they route all of their profits through Bermuda, where they own a non-descript office building.

I wonder HOW rich you can get... 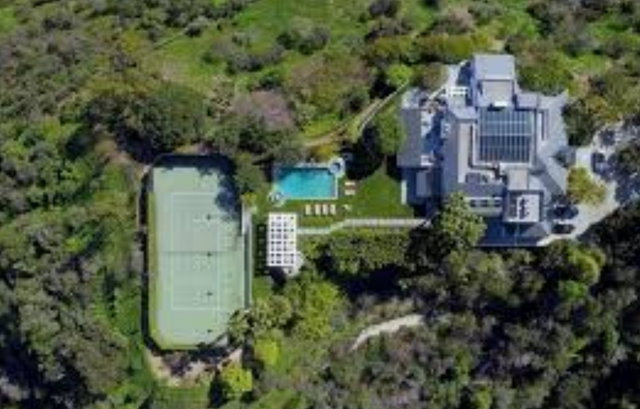 But that's just ONE of their many houses.

This one goes for $32 million dollars and it's in Bel Air, next to Beverly Hills.

After HOOKING people, you probably won't believe that they were also recently granted a patent for a drug to get people UN-hooked, would you..?

Yes, paid to hook people, then paid to UN-hook them. Nice biz, huh...? 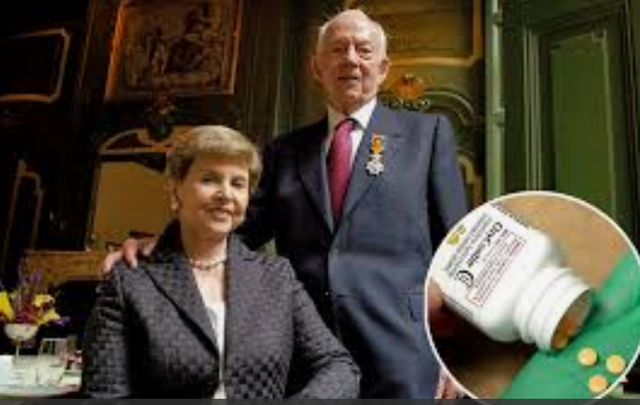 If you weren't in the military, could you wear a serious look on your face while you walked around with a MEDAL on your suit jacket..?

8 posted on 09/13/2019 3:53:40 PM PDT by gaijin
[ Post Reply | Private Reply | To 1 | View Replies]
To: Rebelbase
It has been known in legal circles for years that the plaintiff's bar and their AG allies were going to target opioid manufacturers, just as the did big tobacco. The object is to drain as many billions from another unpopular industry as they can and put it into their own hands. Oh, and it's always the target that is "greedy."

What that family did, trying to move their money beyond the grasp of the lawyers, was prudent IMHO.

IMO, Fentanyl is most likely the biggest contributor to the 2015-2017 spike in that chart.

Yes, Mortimer held every one of those people down and forced and overdose into their systems.

Freedom of choice includes the freedom to make poor choices.

For sure. The government is double dipping. Take money from corporations and kickbacks from black market drug dealers. This is similar to the vaping crisis. The real culprit is the marijuana. Not the tobacco.

McCready from North Carolina, Chelsea Clinton, and Pete Buttigieg all worked for the CIA front company that restructured CIA management in 2015 for Brennan. This is close to the DEEP STATE snake’s head.

The New York Times takes a step back from the lawsuits and criminal charges against opioid manufacturers to note that McKinsey, the consulting firm, also keeps coming up in those proceedings.

The big picture: Purdue Pharma and Johnson & Johnson both hired McKinsey to boost opioid sales. McKinsey hasn’t been charged or sued for any role in the crisis, but details about the company’s involvement have nevertheless crept out through testimony and court filings.

By the way, so did the heads of Google, Facebook and many other anti Trump companies.

The cartels have been flooding us with cheap high grade heroin for 20 yrs.

China, NK, Cuba, Iran have been flooding us with heroin and fentanyl for years.

Heroin and fentanyl are a lot cheaper and easier to get than oxycontin.

A little bit of both.
NY uses a bit of truth as justification to sue a company.
ie when they sued Microsoft on the stupid Browser War.

This got 1B from Microsoft.

I took ONE Oxy after a minor surgery and never took another.
My dreams were very very dark and I don’t like chemicals in my system with that much control of my head.

Like I said....a bit of truth helps them with their case.

Medal was probably awarded to his dog for best of class.

Elizabeth Warren’s daughter works for them too.

Here is a whole thread on McKinsey & Company

I heard on the radio that the family is to be banned from running the company as they knew what they were doing and the damage that was done.

Not everyone who needs and uses this medication develops an addiction to it. And yes, some people do abuse this medication, I know that. But for crying out f**ing loud people who need pain medication are patients, not addicts! Work in a hospital some time as I do and you’ll see what I mean. For Christ sake there are times I’d love to take some self-righteous drug warrior by the throat and pummel the crap out of them.