All that this dialogue has led to is Christian leaders being quiet about Muslim persecution of Christians, for fear of offending their dialogue partners. Has this been reciprocated by Muslims? Have Muslim spokesmen stopped being critical of Christians and Christianity? Of course not. The “dialogue” is all dawah on one side and Useful Idiots, eager to be deceived, on the other.

Robert McManus, Roman Catholic Bishop of Worcester, Massachusetts, said it on February 8, 2013 as he was suppressing a planned talk (by me) at a Catholic conference on that persecution: “Talk about extreme, militant Islamists and the atrocities that they have perpetrated globally might undercut the positive achievements that we Catholics have attained in our inter-religious dialogue with devout Muslims.”

Remember that Mohamed Atta, about the plane he had hijacked on September 11, 2001, told passengers over the intercom: “Stay quiet and you’ll be OK.” The Catholic Church appears to have adopted that statement as its policy regarding Muslim persecution of Christians.

“Leave them; they are blind guides. And if a blind man leads a blind man, both will fall into a pit.” (Matthew 15:14) 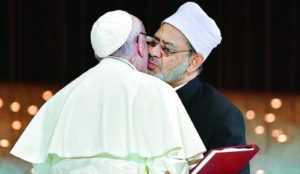 VATICAN CITY (ChurchMilitant.com) – Pope Francis lauded a new initiative Monday to implement a joint interreligious document on world peace that he and the grand imam of al-Azhar signed in February.

Pope Frankie setting the stage for mass conversion from Christianity to Islam.

when the good compromises with evil, evil wins

The Pope really, really needs to read up on the Chamberlain-Hitler Munich conference. Lots of smiles and handshakes at that meeting. But things didn’t quite turn out as Chamberlain had hoped.

Frank’s Head is the first one the Mullahs’ would separate from the body.

the RCC church can sign or issue any statements it wishes, of course.
and with anyone it wishes, too

but when it issues a joint statement with Satan’s Legions on earth, its bound to be a very very misleading statement

“peace” to Moslems is when they’ve conquered you...and either suppressed you entirely, or murdered you outright

just ask any of their victims...anywhere in the world
or just read their koran or listen to so many of their preachers’ hate-filled rants

As a lifelong PRACTICING Catholic, I am more than disgusted with American Bishop’s as a whole and have had my fill with our Marxist Pope and his misinformed ideas on secular life. When I attended a Catholic Jesuit University, most of my instructors were Jesuits and I never heard anything like what is being said by our Pope. I see our Bishop’s as the weakest link in the church, notwithstanding our Marxist Pope.

It’s hard to say who says the most lies when it’s the Pope vs the Muzzies.

People should believe Islam when it says it plans to take over the world. They want all the world to be under Islam like in the Middle East where one sect of Islam kills the other. The devil couldn’t be happier.

It’s my belief Pope Francis by his continuing social engineering pontificating and attempts to equalize the mono theistic claims that Islam shares and honors the same Judeo Christian deity. In what I call bridge building Is only encouraging the continuing attacks and murders of African and Asian Catholics as well as attacks elsewhere including Russia, France, even California and destruction of their churches. by Islamic followers. This Pope by decrying the sale and use of arms which Christian’s could use to defend themselves or warn the faithful not to proselytize or be “fundamental” to discourage conversions. are used by Islamists because they appear to support Islam’s mono theistic claims which is the way Islamists interpret the Pope’s remarks. Seemingly supported by Francis’s refusal to condemn or refute when those theological Islamic claims authorizing murder, deceit and deceptions are used while committing these atrocities becomes the unintended result..

All should watch videos by David Wood, Sam Shamoun, Anthony Rogers, and Al Fhadi. They are all experts on Islam.

That’s Frankie. Nothing if not false and misleading. The ImPopester has a mission.

He's trying but real Christians won't be buying it.

27 My sheep hear my voice, and I know them, and they follow Me:

28 And I give unto them eternal life; and they shall never perish, neither shall any man pluck them out of My hand.

Islam is from the devil.