Rep. Hakeem Jeffries is chair of the House Democratic caucus

Jeffries has not come out for House impeachment efforts

By accusing Trump's cabinet of lacking fortitude, he was needling them to take action to vote to declare Trump unfit to serve – in a constitutional move designed for when a president is incapacitated or otherwise unfit.

Jeffries didn't explain what he meant by a family clinical intervention. Trump has decided to run for reelection, and has been aggressively campaigning around the country, while attacking political rivals.

On Wednesday, in another remark blasted by critics, Trump accused Jewish Americans who vote for Democrats of being 'disloyal' to Israel and fellow Jews. Democrats including Senate Majority Leader Charles Schumer, who is Jewish, blasted the president for using the 'trope' of dual loyalty, which has been used to target Jews for centuries.

Under the 25th Amendment, In a case where a president resists, the matter gets thrown to the Congress, making it a highly unlikely gambit.

That is an argument that Jeffries and others have been making against impeachment, where even if the House were to act, the effort would almost certainly die in the Republican-controlled Senate. 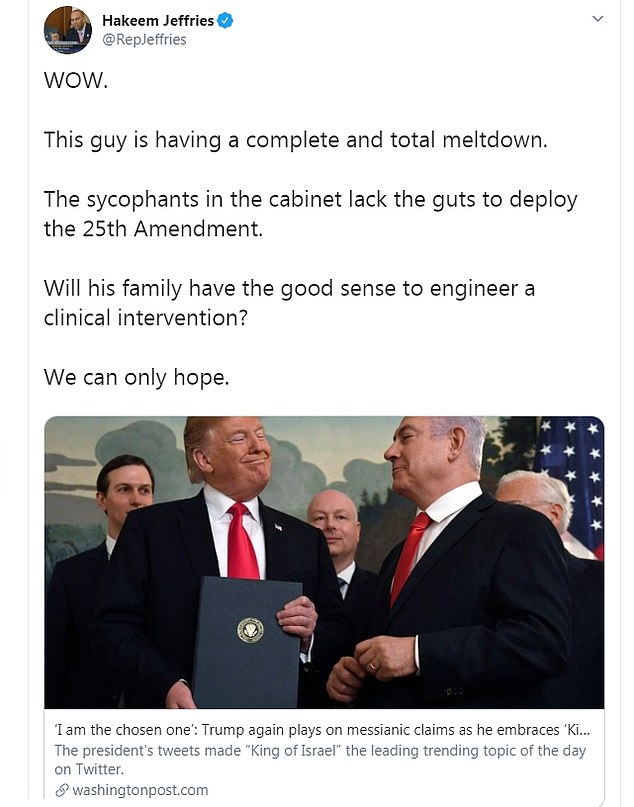 Look at Hakeem Jeffries having a complete and total meltdown and then accusing someone else of doing the same.

Any Rat Representative bashing Trump is a “Top House” Rat.

Any Rat Senator bashing Trump is a “Top Senate” Rat.

the family response should be “pay us $5B and we might consider it...ha ha ha...”

Democrats’ panties are on too tight.

Trump sure has turned the tables on these whack jobs.

They are having a cow... and he knows what pulls their tail...they have it coming.. they have treated him so badly.

bret said last night to imagine obama saying that.... well, he did.. say “we are the ones you have been waiting for”... he thought he walked on water... but oh my... his skin color made him untouchable... what a mess grown ups are today!! on the left side!!

Meanwhile, Hank Johnson is worried that Trump just wants to buy Greenland so that he can flip it over.

Hakeem, do you know how insane you sound?

I don't have any interest in what a Leftist named "Hakeem" has to say or what he thinks about ... well ... anything!

These azzclowns are now totally insane & desperate beyond measure.
Their next step will be either a violent overthrow or an outright assassination attempt.
The “straws” they’re now grasping for have long been burned up as chaff.
They have nothing else left but violence...typical insane libs.

I don’t know how many different ways it can be said, but the Democrats are insane, truly mentally ill.

And some of them, in my opinion, are just plain evil.

No one on the left and almost no one who does not follow PDJT closely will ever hear this comment in context. The propaganda media plays a short phrase surrounded by their own made-up context and the phrase has nothing like its original meaning. I watched the presser and later heard NBC radio news about it ... very different. Too bad for the USA that most people only hear about PDJT from the enemedia.

However, no one ever objected to that, no one was offended, no one got their panties in a wad, no conservative was a snowflake.

But with Trump, they think the nation is outraged, when in fact, most Americans agree with President Trump.

Well NOT this time!

What a moron. The president’s use of “the chosen one” was much more akin to “my turn in the barrel” than any claim to some sort of divinity. He clearly meant a tough job, that needed to be done, had been left to him because no one before him had done it.

When anyone thinks the left and their media shills can’t go any lower, they always prove them wrong.