The suspected gunman in an attack on a mosque in Norway on Saturday was inspired by recent white extremist attacks in New Zealand and the US, online posts suggest.

Police in Norway have so far only said the attack in Baerum, a town 20km from Oslo, the capital, will be investigated as a possible act of terrorism.

In messages posted on the day of the attack, Philip Manshaus, a 21-year-old man who has been named by local media as the main suspect, described himself as “chosen” by “Saint [Brenton] Tarrant”, the gunman who killed 51 people at mosques in New Zealand in March.

“My time is up, I was chosen by Saint Tarrant after all … We can’t let this continue, you gotta bump the race war threat in real life … it’s been fun,” one post reads.

I like the music in the video.
Never let a mosque shooting across the street stop the party.
The music is even changed.

I’d like to know more about the woman he murdered at his home.

18 paragraphs about the Mosque, right wing extremists, and one person injured.

One sentence - the last sentence in the article - about the murdered woman in his home.

The man rejects allegations of murder and attempted murder, his lawyer said on Monday.

The man, identified by media as 21-year-old Philip Manshaus, is suspected of murder in the death of his 17-year-old stepsister and attempted murder at the Al-Noor mosque on Saturday.

But police are considering adding a charge of "attempted act of terror". "I can confirm" he rejects the allegations, his lawyer Unni Fries told AFP. The suspect was due to appear before a judge at 1pm for a detention hearing. Police called for it to take place behind closed doors.

The suspect entered the mosque in the affluent Oslo suburb of Bærum armed with at least two weapons and opened fire before being overpowered by a 65-year-old man who suffered minor injuries.

Hours after the attack, the body of a young woman was found in a home in Bærum and police on Sunday confirmed that it was the suspect's 17-year-old stepsister.

According to local media, she was of Chinese origin and had been adopted by the companion of the suspect's father.

Oslo's acting chief of the police operation Rune Skjold said on Sunday the investigation showed that the suspect appeared to hold "far-right" and "anti-immigrant" views.

Any ‘trans’ going on in the shooter’s family?

No trans, just a Chang, his Chinese stepsister.

Don’t forget Christchurch. Two manufactured events, now a third. This guy kills his step sister but manages to over powered by a 65 year old. Pretty lame for a terror event.

Since the step-sister was Chinese, the MSM will try very hard to make that part of the criminal-hate narrative.

Are there any “far-left” regimes in the world that are “pro-immigrant,” except for immigrants who are also far-left?

Something does not compute here: A SIXTY FIVE year old man disarmed a TWENTY ONE year old?

Shooting up a mosque is counter-terrorism, isn’t it?

Annnd another 20-something man going bonkers. Was this another who was nutso his whole life and wasn’t locked away at a funny farm? The male brain doesn’t fully develop until age 25. 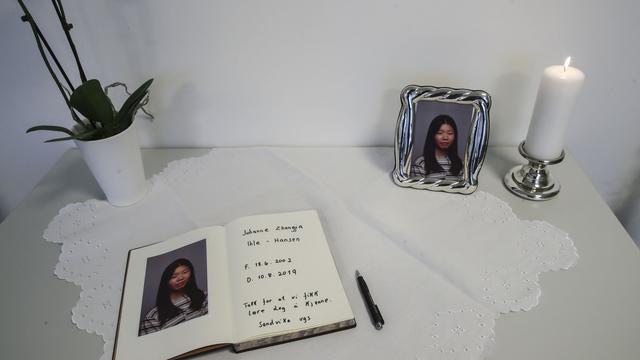 Three days have passed since the shooting attack at the Al-Noor Islamic Center in Bærum and the killing of a home on the same day. It was 17-year-old Johanne Zhangjia Ihle-Hansen who was killed. She was found shot in a residence shortly after the mosque shooting. On Tuesday, Sandvika High School will be open to commemorate her. Light is lit and a memory protocol is presented which fellow students can sign.

The 17-year-old should have started in second grade at school next week.

- According to her teacher, she was a loyal, polite and hard-working student, who contributed well to the classroom environment.