This MSNBC Republican Confesses: 'I Hate to Give Ivanka Any Credit'
NewsBusters ^ | Mark Finkelstein

Here's a working definition of an "MSNBC Republican:" one who is loath to say anything good about anyone associated with President Trump.

Susan Del Percio gave a perfect illustration of the genre on today's Morning Joe. Discussing President Trump's disavowal of the "send her back" chant regarding Ilhan Omar at his recent North Carolina rally, Del Percio said:

"We hear—and I hate to give her any real credit—but we hear Ivanka Trump did say, did speak to her father, too, saying this was a bit too far." 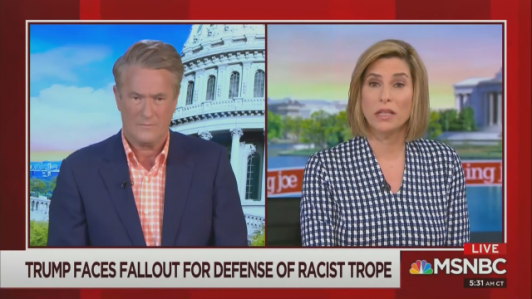 Is this “MSNBC Republican” worried that saying anything nice about anyone associated with President Trump could cost her TV gigs.

Pffft, the sole requirement to be on air at MSNBC is to actively, venomously hate President Donald Trump.

I couldn’t watch that garbage.

What channel does Ivanka watch?

Look how they automatically state “RACIST” in type, without even an “alleged”.

What do they think of Piers Morgan and Gorka being “sent back”?

5 posted on 07/19/2019 7:16:15 AM PDT by the OlLine Rebel (Common sense is an uncommon virtue./Federal-run medical care is as good as state-run DMVs)
[ Post Reply | Private Reply | To 1 | View Replies]
To: governsleastgovernsbest
Susan Del Percio is lying.

There's nothing a women like her enjoys more than using a daughter to damage a father. She's trash. Check out the smile on her face as she says it. Lowlife filth.

God willing this women will find her way to the democrat party where she belongs. I'm embarrassed she hasn't switched parties yet... or maybe she and George Will can form a 3rd party based on their hatred of Trump and his supporters. They could call it PEPOA - - (Phony Elites Putting On Airs)

Any candidate is there to express his views, and LISTEN to his audience. NOT lecture them.

So if “Send her back” is criticized as racist (which is an absurd notion to me), how about:

Why do these people get so much airtime? They represent about 1% of the population, if that.

Trope is the new gravitas.

Presstitutes like it becaue no one knows what it means