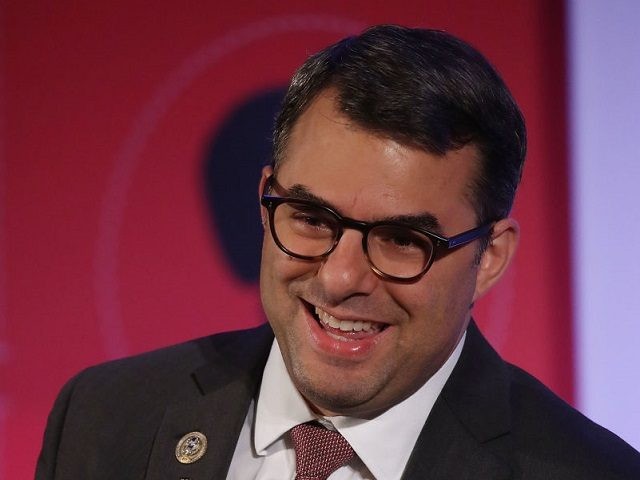 Ask him about his company....what they import, and where it comes from.

Aint he going to look the fool if/when the report comes out on how this all started!

A Palestinian Trojan horse in the Congressional Seat... it’s just a matter of time before they show their cards as to their true allegiance.

4 posted on 05/19/2019 1:08:50 AM PDT by missnry (The truth will set you free ... and drive liberals crazy!)
[ Post Reply | Private Reply | To 1 | View Replies]
To: pepsionice
Financial disclosure forms filed by Amash show that he was paid $60,000 in 2009 by Amash Imports, now known as Michigan Industrial Tools Inc., a hand tool company founded by his father, Attallah. The amount Amash earned from the family business jumped significantly the following year, when he was campaigning for his congressional seat. According to his 2010 disclosure, Amash received $20,000 from Amash Imports between Jan. 1, 2010 and the end of April of that year, but a form filed in 2011 shows he earned a total of $200,000 from Amash Imports in 2010, indicating that he received the bulk of the money during campaign season. Amash loaned his campaign roughly $175,000 in 2010 and $25,000 in 2011, according to FEC documents. Only candidates themselves and chartered banks can lend money to campaigns, and campaign finance law considers loans to be contributions from the time they are made until they are repaid. Amash made seven loans to his campaign in 2010, beginning in February, but the majority, $150,000 was distributed at the height of the campaign between June 30 and October 22. The campaign repaid Amash $150,000 over the course of 2012 and 2013. Will Adams, Amash’s spokesman, said there was nothing unusual or improper about the timing of the payments and campaign loans. He said that Amash was asked to create a brand of tools for his family’s business, and was awarded a performance bonus for his work. “Justin created the Tekton brand in 2009,” Adams said. “It is Michigan Industrial Tool’s most successful line, resulting in more than 10 million dollars of increased sales for the company.” Amash has not received a salary from Amash Imports since he became a congressman, but receives a proportionate part of the profits based on his partial ownership of the company.: Justin Amash Got A Big Raise From His Dad Just Before Loaning His Campaign Money

The foreign agent Amash is hoping to get some bribe money from his Muslim Brotherhood friends if he throws Michigan to the Democrats by going third party in 2020.

Why's that in the headline? Breitbart thinks/knows she brings in clicks?

Recently he announced that he is "open to challenging Trump on a third-party ticket in 2020".

That didn't generate the buzz he was looking for. So this is his second desperate attempt at publicity, Any publicity at all, even bad, is better than none at all, right?

If this attempt doesn't work either, I'm guessing he'll post nude shots of himself in the hope it will help him as much as it did that washed-up actress who did it the other day.

9 posted on 05/19/2019 1:43:21 AM PDT by CardCarryingMember.VastRightWC ("Blessed are the young, for they shall inherit the national debt" - Pr. Herbert Hoover)
[ Post Reply | Private Reply | To 1 | View Replies]
To: missnry
The paw prints of Talib are on these very serious accusations coming from Justin Amash. Were it me, the congressman slanders and calls for impeachment, I would slap a libel suit on him so fast, making him come forward with the evidence before judge and jury.

These libelous remarks use to carry consequences for defamation which also use to be a crime, punishable by law...Michigan should repay their congressman and vote NO next election for Amashs.

There’s a difference between impeachable conduct and doing something that gets you impeached.

Well, of course Tlaib would praise her fellow ‘Palestinian’.

The problem with this guy, melsec, is that unlike the
other Republican legislators it obviously makes no
difference to this clown whether or not the basis of
the whole Russian collusion investigation was Democrat
trickery. We can expect the Democrats to play the useless
obstruction card even though the whole investigation
was initiated based on provable lies. That’s politics.
But, if you are a Republican congressman you had better
have a better list of reasons to dump Trump if that’s
what you want to do. Amash apparently is an idiot.

Born in Grand Rapids, and raised in Kentwood, Michigan, Amash is the son of a Palestinian Christian father and a Syrian Christian mother.

Is he a Palestinian?? If so, he is NO Republican!

SO? 5 Democrats voted for the impeachment of Clinton

Kevin McCarthy and others in the minority leadership (and probably in the WH) knew this guy was a sleeper cell.

Let’s see, Amash’s dad is Palestinian and his mom is Syrian. I wonder if that has any bearing? I am sure it is just a coincidence.