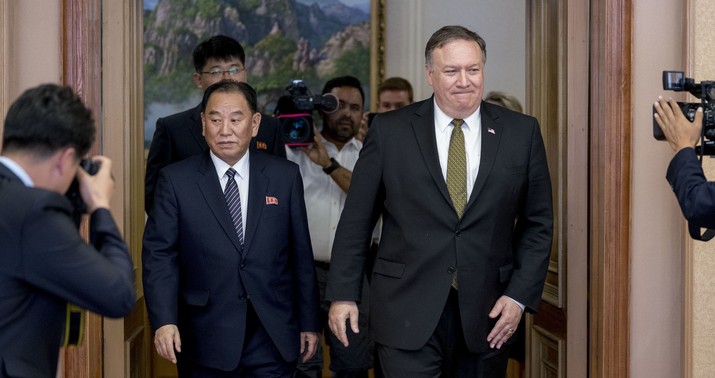 Looks like the two sides of the North Korean nuclear crisis have their wires crossed. Secretary of State Mike Pompeo led two days of talks with the Kim regime and offered a positive take on progress as he left Pyongyang. The North Koreans disagreed:

North Korea says high-level talks with a U.S. delegation led by Secretary of State Mike Pompeo were “regrettable” and has accused Washington of trying to unilaterally pressure the country into abandoning its nukes.

The statement says that the United States betrayed the spirit of last month’s summit between President Donald Trump and North Korean leader Kim Jong Un by making unilateral demands on “CVID,” or the complete, verifiable and irreversible denuclearization of North Korea.

It says the outcome of the follow-up talks was “very concerning” because it has led to a “dangerous phase that might rattle our willingness for denuclearization that had been firm.”

Pompeo himself had a different take on the talks, calling them “productive”:

Secretary of State Mike Pompeo wrapped up two days of talks with senior North Korean officials on Saturday without meeting Kim Jong Un but with commitments for new discussions on denuclearization and the repatriation of the remains of American soldiers killed during the Korean War.

Before departing Pyongyang, Pompeo told reporters that his conversations with senior North Korean official Kim Yong Chol had been “productive,” conducted “in good faith” and that “a great deal of progress” had been made in some areas. But he stressed that “there’s still more work to be done” in other areas, much of which would be done by working groups that the two sides have set up to deal with specific issues.

Welcome to the wonderful world of Stalinist diplomacy, Secretary Pompeo! One key in understanding this is that Pompeo didn’t meet with Kim himself this time, a change from previous visits. That’s more or less normal, as diplomatic negotiations would typically take place at the foreign-minister level and below after the ice has been broken initially. But that also leaves the head of state free to disavow anything produced by his team regardless of how “productive” it was from our point of view.

Also, it’s not clear just how seriously to take this. We already knew that the definition of “denuclearization” would be difficult to pin down before these talks even began. North Korea and China want an expansive definition, one in which the US would withdraw its nuclear-force umbrella from South Korea and perhaps even Japan including our submarine-based platforms. From our perspective, we removed our nuclear weapons from the Korean peninsula already, so all of the action needed has to come from Pyongyang. That is likely what prompted the complaints about the “unilateral” focus from Pompeo.

The public complaint might be a real warning that Kim is about to break off contact, but it’s more likely just a test of the resolve of Pompeo and Donald Trump. North Korea knows how to manipulate negotiations, having very successfully done so in the past to win substantial concessions in return for empty promises. We knew this process would involve those attempts too; Pyongyang tried this before the summit and almost wound up with no meeting at all. They’re probing for weakness in the US negotiating team, and between the US and its allies. If we didn’t see a little of this, we might be better off worrying about whether we were giving the store away in negotiations.

We can assume one thing from this reaction — Pompeo and his team really are demanding CVID in these talks. Perhaps our seriousness on that point comes as a surprise to Kim and his team. Still, at least the talks will continue:

Pompeo has come under increasing pressure to produce tangible results from a June 12 summit that President Trump quickly touted as a game-changing moment that eliminated North Korea’s nuclear threat.

But analysts said the reality is now sinking in that any final accord between the two nations to eliminate Pyongyang’s sophisticated nuclear and missile arsenal will be a long slog with no guarantee of success.

“While we were hopeful there would be some sort of breakthrough, it seems both sides agreed to merely keep talking,” said Harry Kazianis, an Asia expert at the Center for the National Interest.

Sinking in? That much was obvious from the start. The divide is both severe and long-standing, and in some ways both sides have to learn how to talk with each other first. Today is part of that learning process. We may or may not succeed in reaching a deal for CVID, but we certainly won’t get to that goal without talking first.

Part of the dance, or a double-cross?

If it’s the latter, L’il Kim will be crying a few months hence.

Did we honestly think we could trust a Stalin-plus dictator who murders his relatives and extrajudicially throws many thousands of his citizens into some of the most brutal prison camps in human history?

Not me. Communists are liars. Nixon was a fool for his China gambit.

6 posted on 07/07/2018 7:20:57 AM PDT by ecomcon
[ Post Reply | Private Reply | To 5 | View Replies]
To: SeekAndFind
Why are folks so foolish as to believe the public is entitled to know the details of delicate negotiations.

It will never move fast enough to suit Trump detractors.

His detractors are like 4 year olds on a cross-country driving vacation.

At every mile they're whining, "Are we there yet?".

Kim just hasn’t been squeezed enough. He is likely testing the water to see if Trump is a weak and uncommitted as his predecessors were. It’s the NK version of Art of the Deal.

First and foremost, Kim is all about protecting Kim. If he sees that he is about to lose everything, he will be very cooperative. People talk about reunification but I think that has not been on his mind. He wants to remain leader of NK but also be a respected player on the world stage. He is also a very spoiled and delusional man-child that isn’t used to being told no. Time to put his twig and berries in a vice and start cranking the handle.

My guess, they want to stall until after the mid-terms to see how strong Trump’s hand is.

So, this raises the question of who is the real power inside Noko. Gen Keane speculated the other day that it’s actually the military.

And, of course, Kim met with both Xi and Putin after his Trump meeting. Xi probably read him the riot act and Putin promised supplies.

"...The statement by an unnamed North Korean Foreign Ministry spokesman on Saturday came hours after Pompeo concluded two days of talks with North Korean officials led by Kim Yong Chol. The statement says that the United States betrayed the spirit of last month’s summit between President Donald Trump and North Korean leader Kim Jong Un by making unilateral demands on “CVID,” or the complete, verifiable and irreversible denuclearization of North Korea. It says the outcome of the follow-up talks was “very concerning” because it has led to a “dangerous phase that might rattle our willingness for denuclearization that had been firm.”

AP talking to UNNAMED SOURCES. I'll wait for the movie to come out before I would believe their tripe.

12 posted on 07/07/2018 7:28:39 AM PDT by Sa-teef
[ Post Reply | Private Reply | To 10 | View Replies]
To: Dr. Sivana
This, together with the smear job on Rep. Jordan (and the car wrecks of his, what is it, nephew, and the car wreck of the candidate in Florida, and May's evisceration of Brexit, and the re-rise of Antifa, and the anti-Q push simultaneously on a number of alt-right forums, and the snarky arrogant air of Rosenstein, and the Maxine Waters calling for violence, and the Red Hen and the teen in Texas getting his MAGA hat snatched off and the supposed huge anti-Trump rallies on June 30 which petered out...all at once...indicate that the Deep State is cornered; they no longer have the bored, careless air of those who know the game is rigged in their favor; they are getting hurried and slipshod, and it shows.
13 posted on 07/07/2018 7:30:10 AM PDT by grey_whiskers (The opinions are solely those of the author and are subject to change without notice.)
[ Post Reply | Private Reply | To 9 | View Replies]
To: SeekAndFind

“My guess, they want to stall until after the mid-terms to see how strong Trump’s hand is.”

I’m inclined to us being played for saps. It’s the standard commie playbook.

My guess, they want to stall until after the mid-terms to see how strong Trump’s hand is.

The only thing they will respond to is strength and they know that Trump is unlikely to take any military action prior to the upcoming elections.

Lol.
North Korea doubts if Trump is bound to get impeached.

The tough stance is required for domestic consumption. After all, the Kims' are considered deity in NK.

I wonder if Kim is getting advice from the Dems and being told to hold on because Trump will soon be gone?