Toppled dictator Saddam Hussein's exiled daughter is among dozens named on Iraq's "most wanted" list of people accused of supporting acts of terror.

Those on the list are wanted for belonging to or having an affiliation with ISIL, Al Qaeda or Saddam's Baath Party regime.

Raghad Saddam Hussein responded on Monday by pledging to take legal action against those who have "insulted her".

Iraq's government has been seeking to prosecute Ms Hussein since 2006 for allegedly supporting violence in the country.

The list echoes the US set of 55 playing cards, released in 2003, that depicted the most wanted members of Saddam's former government. The cards were given to American troops when they invaded Iraq to help soldiers identify prominent fugitives following Saddam's ouster in the US-led invasion.

"I didn't have any role in the Baathist system, even when the US occupied Iraq in 2003," Ms Hussein told Al Arabiya in an interview. Although reported to be living in Jordan, she denied now being there but did not elaborate on her whereabouts.

Some of the names mentioned in the list are already included in the US's most wanted file, and the document purports to provide detail on the scale of involvement of Baath party officials in terror activities since the end of Saddam's regime.

"These are the terrorists most wanted by the judicial authorities and the security services," a security official said. "This is the first time we publish these names which, until now were secret."

The government has sent the list to Interpol, the official said.

The list contains names of 28 people suspected to of belonging to ISIL,12 from Al Qaeda and 20 from the Baathist party. It provides details of the roles they allegedly play in their organisations, crimes of which they are suspected and in most cases, photographs.

However, the name of ISIL leader, Abu Bakr Al Baghdadi, is absent from the list.

The document includes senior members of ISIL, among them Fawaz Mohammad Mutlaq, a former officer in Saddam's Fedayeen paramilitary organisation who later became a member of ISIL military council.

The fighters named in the document are accused of fighting in Mosul, Iraq's second largest city, and the surrounding province of Nineveh, as well as in the provinces of Kirkuk, Diyala and Anbar.

They are also accused of murder, attacks on security forces and for the financing and transport of weapons.

Maan Bashour, a Lebanese man accused of recruiting fellow citizens to fight in Iraq, is the only non-Iraqi listed in the document.

In 2014, at the height of the militant group's power, ISIL controlled nearly a third of Iraqi territory, before being beaten back by security forces backed by a US-led coalition.

The release of the list comes just three months ahead of national elections in the country, where prime minister Haider Al Abadi is hoping to remain in office for another term.

Although Mr Al Abadi is considered likely to be re-elected following what the government says is the military defeat of ISIL and the federal government’s recapture of Kirkuk from Kurdish forces, his prospects have been set back by an attempt at a grand political alliance, through his so-called Victory Coalition, that he hoped would deliver the decisive support of the country's major Shiite bloc.

Criticism began to mount after Mr Al Abadi, who has largely preached a non-sectarian vision of Iraq, entered into an electoral pact last month with some of Iraq’s most controversial Shiite militias. The Victory Coalition saw Mr Al Abadi aligning with, among others, the Badr Organisation and Asaib Ahl Al Haq — both widely seen as sectarian, and Iran's strongest allies in Iraq.

Her eyes look like they need to find a soul behind them...

Any news source the uses “the more respectful to Islam” ISIL instead of ISIS is suspect.

Point, ... I am SO tired of this PC qualification.

How ironic. A collar with nooses on it. 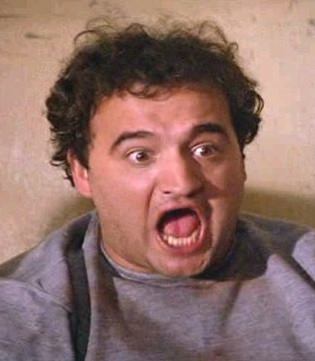 You’re right - I’ve seen worse, but those are soulless eyes for sure.

She needs our prayers.

12 posted on 02/05/2018 3:15:31 PM PST by Paulie (America without Christ is like a Chemistry book without the periodic table.)
[ Post Reply | Private Reply | To 2 | View Replies]
To: nickcarraway
"Levant" refers to a somewhat undefined, (but much larger than Iraq and Syria), geographical area that Islamic sycophants believe to include Lebanon, Turkey, Armenia, Azerbaijan, Yemen, Qatar, Kuwait, Oman UAE, SA AND Jordan and Israel.

Using the term "Levant" signifies the possibility that these areas may belong to Islamic State rather than dismissing IS entirely.

Get her a gig on The Bachelor.

Amen to that. No doubt Christ has already found her... She just needs to open the door.