My life changed forever when I was a young man on an exchange program in LeÃ³n Guanajuato, Mexico. Across a plaza, I saw a girl. For me, it was love at first sight. From the moment I got to know her, I knew that I wanted to spend the rest of my life with her. In the years ahead, whether I was changing baby diapers in Caracas, Venezuela, building a business in Miami or leading a state in Tallahassee, Columba has been with me, my best friend in all of lifeâ€™s challenges and joys. Together, we have built a family with three wonderful kids: Noelle, George P., and Jeb Jr. Each of our kids has given us blessings, and now they are giving us grandkids who seem to think Iâ€™m their personal climbing gym. They call me â€œGampy,â€ and, together with their grandmother, they keep me honest. Iâ€™m never as happy as I am when Iâ€™m with my family, and thatâ€™s been true all my life.

So when I became governor, I could be pretty relentless about getting the peopleâ€™s business done. We defended and protected the most vulnerable in our society. I have always believed that as a nation, we reveal our values by how we govern those moments when life is most vulnerable. So I rolled up my sleeves, and working with the state Legislature, we enacted reforms that helped businesses, saving hundreds of millions of dollars a yearâ€“ keeping jobs in the state, and making sure that Floridaâ€™s economy could work for everyone.

My Administration attacked issues like that with the same focus. We cut taxes every year. Cut the state workforce by 13,000. One year, we enacted six laws aimed at protecting our citizensâ€™ right to bear arms. My opponents called me a lot of names, but the one I liked best was Veto Corleone. I vetoed over 2,500 line items in the stateâ€™s budget. We assessed the problem, took on the challenges and gave people the freedom to be creative and come up with solutions. When I was governor, I always believed doing the peopleâ€™s work was a great joy and an incredible responsibility. I knew that as governor, I had the power to make things happenâ€”not just give speeches. At the beginning of my second term, a friend of mine gave me a clock, which was ticking off the seconds, minutes, hours and days until my term of office was to end. It was a pretty good reminder that my ability to serve Florida was limited only by two things: time and how I used it. There were always more people to help. Jobs to createâ€”we created 1.3 million of them. Small businesses were startingâ€”we had more than 80,000 small businesses start in Florida when I was in office. We had prosperity to launchâ€”and Floridaâ€™s households were earning over $1,000 more per year when I left office than when I began. We had a budget to balance, and with the help of $2 billion in vetoes, we achieved a AAA-bond rating. 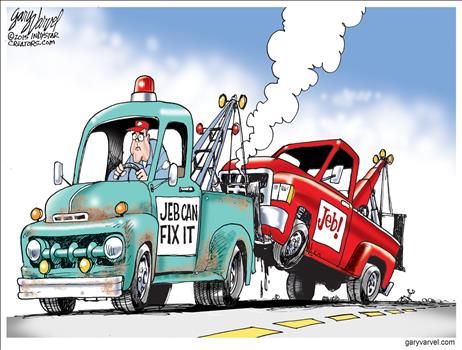 It is wonderful that Jeb found a woman to love and raised great kids who provide him with grandchildren. However, that is completely irrelevant to whether he should be President.

He was a decent governor back in the day, but simply lacks the temperament, nor the conservative passion that we need after seven years of obamaism.

Neither your father, Brother nor you are real Conservatives there Jeb.
Had you papa been one he’d have won re-election.
You brothers compassionate conservatism was a sham meant to confuse folks in to thinking he was conservative. He wasn’t, look no further than John (F-ing Roberts).
And as for your sorry RINO ass, “coming here as an illegal is a act of love”?
Jeb, just go the hell away and take your name with you pal.

I remember well how he governed when life was most vulnerable. Matter of fact I can never forget. May God have more mercy on his soul than he did Terri’s.
Her family was never happier than when they were with her.
Not only could they not see her... They couldn’t even give her a drink of water!

That long winded sack o’ horse manure reminded me of the story about the hard working young Mexican boy who labored long hours in an effort to get ahead and lift himself out of poverty, and do you know what he did with his first 50-cent piece?