The government of San Jose, Calif. has come forward with a proposal to mount license plate readers to the city’s garbage trucks in an effort to expand police surveillance beyond department cruisers. Have no fear, innocent citizen, for the trash companies may be stepping up to help our friends in blue.

San Jose, California happens to be America’s tenth largest city - that makes it pretty difficult for the police force to keep up with everybody. In a story by the local San Jose Mercury News, the new initiative comes following a shrinking police force (no, Hot Fuzz fans, I won’t stop calling it a “force”) and a growing concern over crime - specifically auto theft.

License plate readers are really good for what San Jose expects to use them for, which is finding stolen vehicles. The technology scans the roads, taking pictures of license plates and highlighting the lettering. Hook it up to a police database, and now the gizmo can run it’s collected data across known stolen plates making things easier for the cops to locate what is missing, and obviously more difficult for thieves to hide.

The department’s fleet currently has six cars with the license plate readers (LPRs) equipped, but is hesitant to add more - whether they be on patrol vehicles or trash trucks:

“In a perfect world with the right staffing, I think it would be beneficial,” [Assistant Police Chief Eddie] Garcia said. “But right now, we need to ask ourselves if we have the capacity to take on something like this. If we don’t have the staffing, it just puts an added burden on us at that point.” The equipment is also very expensive, with the article reporting the city budgeted over $68,000 to add two more LPR’s to their fleet. Split that in half, and you get $34,000 - not for an entire car, but simply added equipment. That’s almost as much as a brand new Camaro. In a feature with the new Police Package Dodge Charger over at Road & Track, the cruiser was quoted at costing $46,355. Add on a shiny new LPR and we’re essentially at a $80,000+ car. One patrol car.

The appeal of using garbage trucks comes from their regular navigation of massive networks. The plan in San Jose would be to team up with the local waste industry, hook up the LPR’s, and as half of a citizen’s monthly wage in food leftovers gets dumped into the truck, the tech can run it’s algorithms across the driveway and send its data straight to the rozzers.

As for your potential privacy concerns, Councilman Johnny Khamis had this to say:

Khamis said mounting the plate readers on garbage trucks instead of police cars wouldn’t be any more intrusive than what’s already being done. “This is a public street,” Khamis said. “You’re not expecting privacy on a public street.” He’s not entirely wrong, but the city came under severe backlash after it decided to field a surveillance drone - a program that was subsequently terminated due to public outcry. There are also requests that the city council present a plan for adapting the waste trucks to the public before any deal is made.

Speaking of deals, the local waste companies seem to be open to the idea. More from Mercury News:

Officials from GreenTeam of San Jose, which services about 48,000 single-family homes in west and central San Jose, told this newspaper the company is on board.

“GreenTeam of San Jose would love to help the city of San Jose thwart crime,” said outreach manager Weslie McConkey. “We are interested in learning more about the proposal to install license plate readers on our garbage and recycling trucks.” Unless I am missing something, any information a third party waste company would get from a license plate number - like the owner’s address - would already be accessible. License plates are not like social security cards; they are meant to be public.

The main concern stems from the database of driveway images that would be stored. Given enough use, eventually the database of photos could be used to track license plate numbers, potentially revealing geographical-based details of our everyday lives like where we work, whose house we frequent, and as the local article points out, information like which religious service we attend or otherwise-secret visits to the gay bar on the weekends. Stuff you don’t want Joe at the dump to know.

My biggest issue, if I were a local taxpayer, would be the discouraging price I would be paying for this increased surveillance.

Wave at the trash truck everybody, there’s a deputy somewhere asleep at his desk, his head in a box of donuts, who should be watching. 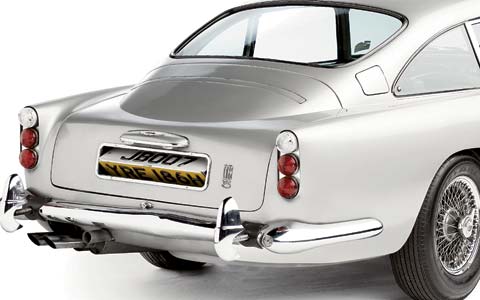 007 was 50 years ahead of his time.
3 posted on 08/22/2015 12:48:02 AM PDT by Impala64ssa (You call me an islamophobe like it's a bad thing.)
[ Post Reply | Private Reply | To 1 | View Replies]
To: nickcarraway
People need to wake up. There is no valid reason why your license plate number should be publicly displayed for all to see. You should pay for your license and get a generic sticker or plate that shows you have paid for licensing but the actual unique number should be private just like your DL number. Your actual license plate "number" could then be presented to LEO based only on probable cause just like any other form of identification.
4 posted on 08/22/2015 4:21:39 AM PDT by precisionshootist
[ Post Reply | Private Reply | To 1 | View Replies]
To: nickcarraway

Is it still a “public street” with no expectation of privacy if a citizen whips out an iPhone and starts videoing a cop doing his job? Just wondering.

Then the garbage man needs to be deputized in order for this to be a lawful and legal surveillance.

Are we ready for Law & Order: Garbage Man Investigations Unit?

My town installed readers on the main road our local auto thieves use to leave town. When there was a hit, we’d notify the jurisdiction up the road and they’d pop out and scoop up the guys as they came by.

Worked like a charm, auto theft took a big drop... for a while... now the thieves steal a car plus the plates from a nearby vehicle. It’s an endless progression: crime evolves to circumvent the technology, then the technology evolves. Most of the dudes who get caught are the amateurs.

The real privacy issue here isn’t the readers, they’re just a more efficient version of the license number “hot sheets” that cops have had since the 30’s. The problem arises when the data gets warehoused and becomes available for law enforcement use. When that happens, you’re no longer looking for a specific criminal, you’re keeping track of everybody’s movements.