Former Gov. Joe Kernan says a signature on a petition to place Barack Obama's name on Indiana's 2008 primary ballot isn't his, putting him among dozens of dubious signatures found in a newspaper's investigation.

Kernan, a Democrat who campaigned for Hillary Clinton during the 2008 primary, told the South Bend Tribune that he didn't sign the Obama document.

"No, not at all," the former South Bend mayor said when asked whether the signature next to his name on the Obama petition looked like his own. "Nor does the printing look like mine."

The Tribune reported Wednesday that it has talked with more than 40 people who say they didn't sign ballot petitions submitted in St. Joseph County for Obama or Clinton, despite their names appearing on the documents.

State Republican Party Chairman Eric Holcomb has called for a federal investigation into the matter.

This sounds like a BIG DEAL. Most Indiana Democrat pols were FIRMLY in the Hillary Clinton camp in 2008.

“State Republican Party Chairman Eric Holcomb has called for a federal investigation into the matter.”

Yeah, that’s the ticket. Put Eric Holder on it. He’ll get to the bottom of this ASAP!

Looks to me like the Dems are gonna take Obama apart from the inside.....heh....

No argument here. But isn’t late 2011 a tad late to be bringing this up? I guess my point is that the clowns who brought you all this corruption can’t exactly be entrusted to clean it up. Eric Holder has already proven his ineptitude/corruptness in cases ranging from Black Panther voter intimidation case to Fast and Furious. Any solution that requires HIM in particular to do the right thing is fundamentally misguided IMHO. Yeah, Holder will get right on it, as soon as he finishes gathering all the documents Issa requested.... /sarc 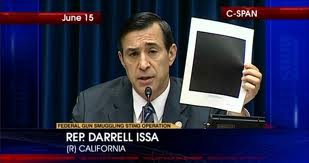 If I remember right some Democrat caucuses in 2008 were packed with non residents bussed in from Illinois.

How interesting, but not expecting anything.

Someone has been sitting on this, waiting for the right time. This could have been done when the papers were filed, for instance.

Just another part of the game we call elections here.