I use to really like Newt, a lot, but, lately, not so much.

What I find thoroughly amazing about this, is he just announced on, what, Wednesday I think, his presidential candidacy. He then torpedoes his campaign on the following Sunday morning. I never thought he had any chance at all, but this is just bizarre. Doesn't he have a campaign manager? 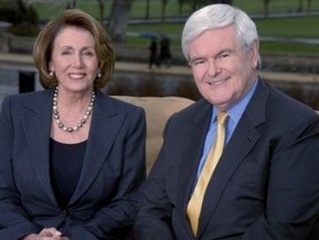 This tells me all I need to know. If Newt is for the man-made Global Warming scam, then he is a Leftists. Nobody with any common sense would support that nonsense.

How does Newt explain the ice caps on Mars shrinking? Are we Globally Warming the entire solar system, or could it be normal cyclical changes in the sun(Sol)? Naah, it must be us. And if we would just stop being stupid and give Algore his million billion dollars, he can change the entire atmosphere of the Earth and change the whole Universe! He is SuperMan!

If Newt supports GW, he is a Globalist and Left. There is no in between about that.

I have always thought Newt was a good speaker, and did articulate conservative positions well.

but why, in his first day in the campaign, would Gingrich attack the ONLY person, right or left, who has a comprehensive plan for the deficit????? what the heck is he thinking?

Oh, yeah, me too. I wanted everybody’s voice in and thought I could depend on Newt as a mouthpiece for the Right. Now, for all to see he aims for the mushy middle to expand his base? Ick.

Nothing he says from now on can restore an ounce of trust after this arrow into the heart of a serious plan. Ethenol promoting, global warming, elbows with Nancy and Hillary is not the path to the trust reserve of the conservative Right.
I got caught supporting a stinker entering the race. Embarrassing.

I am with you, except now, Newt has lost any support from me. I will not support him, period. He is worse than a Rino!