Perle is a breathtaking fraud. His mouthing lie after lie easily exposes this punkneo as a charlatan. What's more outrageous, Perle's words evidence his elitist, unmitigated contempt for American and Americans, and for those who dare reveal his self-absorbed pomposity and falsity.

What does this guy do for a living the working class taxpayer might ask? He seems to do nothing but roam the world, write stupid books, and make idiotic statements. Oh wait----let's not forget Perle is going into the oil business in Iraq-----thanks to his war profiteering---the trillions of tax dollars (and rivers of young blood) deposited there. Nice to know US taxpayers made the area safe for Perle's business ambitions (gag).

It would be a challenge to determine who is more nauseating---Poobah Perle or his comrades in arms.

Winner of the 2008 Best Election Night Performance Award in the category of:
"I Know Nothing About this Republican Disaster." 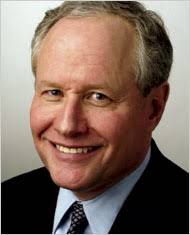 "Thank you very much. But I could not have done it without the help of all the
punkeos--David Frum, Michael Gerson, David Brooks, Richard Perle.....and
my Dearest Daddy."

"Sniffle---my Dearest Daddy (who was Giuliani's foreign policy advisor) said,
"The historical task and political purpose of neoconservatism is.....to convert the
Republican Party and American conservatism in general, against their
respective wills, into a new kind of conservative politics suitable to
governing a modern democracy."

"I especially want to thank punkneo Douglas Feith for faking documents on his
home computer so we punkneos could dupe the president."

"Without Doug we would not have been able to transfer trillions of US dollars
into the Mideast, into the pockets of war profiteers, which enabled Richard Perle
to startup an oil business in Iraq with his cut."

COMMENTS The political entrail readings showed the crucial conservative base stayed home.........too bad the pukes "forget" to tell McC that would be one outcome of the punkneo-RINO bi-partisanship. Be aware that many senior neocons are rank opportunists who squatted in the Repub Party for their stealth purposes-----they are actually former Trotskyites that flew the coop when Stalin executed their hero.

AS FREEPER TADSLOS COGENTLY POSTED: "People forget that candy-ass Kristol, and his crony, metro-sexual Brooks are the original makeover artists for McCain post-2000. They are McC's original groomers and media switch operators.....obsessed with religious cleansing of the party. Kristol at his most smirkiest---urging McCain to fire his 2008 staff, to start all over at the 11th hour, as McC's numbers tanked. Shows how how ill-conceived, advised, equipped and poorly managed McC's campaign was. But then, what else to expect from a Republican candidate made up of neopunks Kristol and Brooks."

Kristol championed McCain early in the election cycle to push his boy to the nomination. Kristol "support" for Palin had nothing to do with conservatism and everything to do with gauging the political winds to get his maverick liberal senator elected president. Kristol is the media poster boy for why D.C. plutocrats are completely out of touch with the rest of the country.

Watching Kristol smirking and squirming in his Fox seat on election night as McC lost his bid for the presidency was a consolation prize to this abortion of a 2008 election cycle.

Not to worry.......next week Kristol’ll be blowing whichever way the Beltway Winds are blowing......sucking up to Obama. Kristol went from Dem Moynihan's staff to Repub Quayle's, from The Weekly Standard to the NYT, from Bush to RINO Giuliani to McCain. And the pukeneo is still secretive as ever....smirking and spewing blue-blood beltway Republicanism, and kicking conservatives to the curb..........

Most don’t pay any attention to Kristol or Perle. Only inside the beltway types, and some political junkies.

2 posted on 02/24/2009 1:30:12 PM PST by Badeye (There are no 'great moments' in Moderate Political History. Only losses.)
[ Post Reply | Private Reply | To 1 | View Replies ]
To: Liz
I've got to admit that during the time between 9/11 and 2005 I had a great deal of respect for these "Neocons" (Perle and entourage). I appreciated their disdain for the UN, the EU and them staunchly making the case against Saddam (I consider his removal right). But Perle and his groomed protege Chalabi are nothing but frauds. Opportunists who denounced the war effort the moment it didn't go their way.

Perle and Ledeen lost me completely the moment I learned of their cooperation with the terrorist Islamomarxist MEK cult.

What doesn’t exist is Dana Milbanks intelligence nor integrity...

Most excelent, as usual.

"The historical task and political purpose of neoconservatism is.....to convert the
Republican Party and American conservatism in general, against their
respective wills, into a new kind of conservative politics suitable to
governing a modern democracy."

That little tidbit explains so much.

By modern, I assume he means one where he and his cronies hold the puppet strings.

Perle is a breathtaking fraud. His mouthing lie after lie easily exposes this punkneo as a charlatan

Richard Perle is a bottom feeding, scumbag, leech. His (cough) 'loyalties' are to no one but himself and his cabal of neocon cohorts.

"Series", I cannot express my true feelings about that (blank) or this would happen in a New York minute...

Anyway, I don't know what 'crimes' he committed . But what he and his cabal pulled on Rummy and Dubya was at the least borderline conspiracy.

He should be expelled from the USA.