TEHRAN, (CBS) Sitting on a black leather sofa in his sparsely furnished North Tehran apartment, Andre Pitts speaks with a yearning for home.

"I'm from America and I love my country." he says. "I miss my friends."

Most of all, Pitts misses his wife and young daughter. "I'm scared of one thing: That I go home and she doesn’t recognize me," he says. "That would kill me. I am doing all this basically for her — to help better her life."

Pitts is the American star of a champion Iranian basketball team, Saba Battery. The team is owned by Iran's Ministry of Defense — the same Ministry of Defense that the United States accuses of trying to make a secret nuclear weapon. It's an irony not lost on Pitts.

"But I play basketball," he says. "I am not a politician. I am not a soldier."

Since 1979, when student revolutionaries in Teheran took 52 Americans hostage for 444 days, relations between the United States and Iran have been minimal. The United States still enforces sanctions against Iran and has led the move recently to punish Iran through the U.N. Security Council for its controversial nuclear research program. Individuals on either side of the diplomatic divide have been isolated from one another as cartoon stereotypes: citizens of the Great Satan versus residents of the Axis of Evil.

In that context, Andre believes that he — and the 20 or so other American currently playing basketball in Iran — are good ambassadors. "I think I’ve done a good job of representing my country as both an athlete and a man," he says.

It was money that brought Andre and players like him to the Middle East. Before coming to Iran, he played in Syria and Lebanon. The level of play is not nearly what it is in the NBA, but the money is very good: between $4,000 and $30,000 a month.

It's money Pitts has spent carefully on the family and home he never had as a boy. He was orphaned at a young age and had to be rescued from a foster home in Texas by his grandmother and various aunts, who struggled to give him a stable childhood.

"I'm taking care of my family by playing here," he says, turning on his computer to show a screen crowded with photos: his beautiful new house in Austin, Texas, his beloved 2-year-old daughter and a proud holiday snap of Andre and his wife, relaxing on a cruise ship. "I wouldn't have the life I have in America if it wasn't for playing ball in Iran."

Pitts' life in Tehran is one of Spartan routine that takes him from his apartment to the gym, and from the gym to practice, then home again .Occasionally, he is invited out to a meal or a party with his teammates — but on the whole, life in the Islamic Republic is sedate.

Pitts is quick to point out the silver lining.

"You can go out, but not to clubs. There's no drinking. You're not staying out until three or four in the morning because nothing's open that late. It's good for an athlete. You go home, get your rest, don't have to worry about a hangover.

It's a couple of years he hopes to spend playing in the Islamic republic, with Saba Battery, where he is adored, and where, he says, he enjoys the camaraderie of an exceptionally close-knit team.

The biggest threat to his plan is politics — specifically Iran's insistence that it will continue to enrich uranium. It is conceivable that the diplomatic fallout could mean American citizens would face expulsion from Iran.

"I hope it can be resolved in a peaceful way," says Pitts, the proud American, "because I love it here, too." 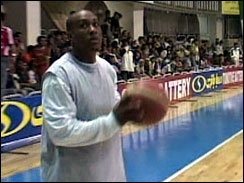 Andre Pitts is the American star on one of Iran's top basketball teams. "I wouldn't have the life I have in America if it wasn't for playing ball in Iran."

Pulltext from report: "...Pitts is the American star of a champion Iranian basketball team, Saba Battery. The team is owned by Iran's Ministry of Defense — the same Ministry of Defense that the United States accuses of trying to make a secret nuclear weapon..."
1 posted on 05/27/2006 6:09:06 PM PDT by sully777
[ Post Reply | Private Reply | View Replies]
To: sully777

Anything for a paycheck, eh?

Sports, commerce, and scholastics are very powerful forces for peace. The Persians are very compatible with Americans, they love the same things we do and they do well when they reside here. The hard liners' days are numbered.

Cannot blame him for doing the best he can for himself.

Cannot blame him for doing the best he can for himself.


Just wondering if the concept of trade sanctions, etc. ever crossed anyone's mind when they read this piece?

First, the basketball player is doing something illegal.

Second, this story comes to us through Iran's defence ministry.

Third, CBS' spin on the story (I caught the actual report on the Evening News) reminds one of the propoganda pieces coming from CNN when they had a bureau in Iraq.

Forth, the angle (and tone when you listen to the reporter's voice over) is an implied anti-american spin. "Why if it wasn't for us americans there would be candycane lamp posts and gumdrop sunshine."

IMO, it seems inapproriate to remark that he's catching as catch can. One wonders if a puff piece from the 1940's about Americans working for Krupps or Messerschmidt would have garnered your response.

BTW Pox, I recall hearing for eight decades that the hardliners' days were numbered in the Soviet Union. Idi Amin's days were numbered. Pol Pot's days were numbered. Some people thought that the aforementioned positions were xenophobic bravado, jingoistic sabre rattling, or worse...Reaganesque BS.
7 posted on 05/28/2006 1:06:01 AM PDT by sully777 (wWBBD: What would Brian Boitano do?)
[ Post Reply | Private Reply | To 5 | View Replies]
To: sully777

However, I would posit that none of the above examples were backed by a religion, specifically Islam...