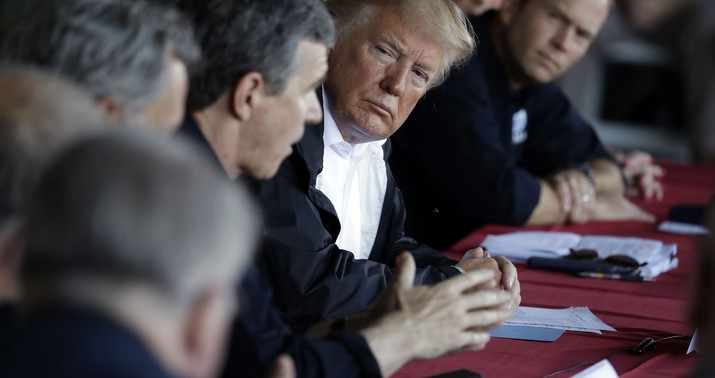 Gotta say, I’d have had more sympathy for Roy Cooper in this situation two weeks ago. That would have been before the same people who scolded Republicans and conservatives who wanted to reopen the public square and demonstrate for those policies suddenly thought squeezing several thousand people into streets for demonstrations for a week on end was no problem at all. Political speech takes precedence over commerce, they have argued — so why does that not apply to a full political convention in August?

Governor Roy Cooper sent his letter to Republican Party leaders a day before the deadline President Donald Trump set for the state to guarantee that convention attendance in Charlotte would not be limited by social distancing restrictions.

Cooper said he could make no such promise for the four-day nominating convention scheduled to open on Aug. 24.

Without knowing how the COVID-19 outbreak will continue to unfold, he said, “planning for a scaled-down convention with fewer people, social distancing and face coverings is a necessity.”

Republican officials so far have submitted proposals for a “full convention” rather than one with fewer participants and social distancing as requested by the state, Cooper said.

“As much as we want the conditions surrounding COVID-19 to be favorable enough for you to hold the convention you describe in late August, it is very unlikely,” Cooper said.

That’s a common-sense approach in a pandemic, but the problem with those restrictions is that they aren’t applied equally. Police have arrested people for taking their children to play in the park, but seem entirely uninterested in enforcing quarantine restrictions on large public protests, especially in relation to the George Floyd homicide. Of course, those are outdoors, but the vectors for transmission aren’t impossible outdoors either, especially in crowds of these densities. If we’re going to have a standard for public events, including political speech, it should be one standard.

The RNC says pass on Cooper’s separate standard for the GOP’s convention:

NEW: the RNC has just issued this statement regarding the convention in August. @SpecNewsCLT has team coverage on every development #RNC2020 #cltnews pic.twitter.com/vm2rIxkVZY

Trump had already made that decision last night, after Cooper’s final response on the matter:

President Trump said Tuesday that the Republican Party would seek to pull its August nominating convention out of North Carolina, after Democratic Gov. Roy Cooper refused to heed a party demand that he pre-authorize a gathering of at least 19,000 people.

“Governor Cooper is still in Shelter-In-Place Mode, and not allowing us to occupy the arena as originally anticipated and promised,” Trump tweeted shortly after 9 p.m. “. . . We are now forced to seek another State to host the 2020 Republican National Convention.”

Republican Party chair Ronna McDaniel had said earlier in the day that the party would begin exploring options outside North Carolina.

“We have an obligation to our delegates and nominee to begin visiting the multiple cities and states who have reached out in recent days about hosting an historic event to show that America is open for business,” she said in a statement.

There will inevitably be some red-state governors looking to boost the GOP by promising them a full convention, although one has to wonder whether they will press for an outdoor rather than indoor venue. That would minimize (although not eliminate) the COVID-19 risk, while giving plenty of room for a big convention response. Security would be tougher but hardly impossible; Trump holds outdoor rallies all the time.

This still leaves a couple of problems. First, red states don’t really need a convention to stoke enthusiasm. The point of picking North Carolina was because it’s on the bubble, the same reason the DNC chose Wisconsin for its convention. Republicans hoped to boost turnout in the state to put it firmly in the red column in November. Florida might be on the bubble enough to benefit from that, as might (gulp) Georgia, but any potential loss of enthusiasm in NC over the change would theoretically complicate Trump’s election chances there. Even if you don’t entirely buy the idea that convention awards help the ticket — I’m skeptical — pulling out at the last minute is bound to cause some resentment. Trump and the RNC appear to be betting that Cooper’s going to pay that price, but I’m skeptical about that, too.

Second, Cooper’s double standard aside … what’s really the point here for either party? The conventions are anachronisms with pointless security headaches at best, and arguably deleterious to public health in this cycle. The only worthwhile point in pushing this is to highlight the double standard of catering to mobs while restricting everyone else, including businesses, but at the end of the day it’s still about meaningless political posturing and revelry that has almost no impact at all on voter behavior. The 2020 convention fight looks like a game of chicken between two old drivers who don’t know that there’s no point at all in the collision.

Good. RNC what’s-her-name should be fired for the idea of splitting up the convention.

The RNC lawyers were telling her that NC is not in technical violation (breach) of contract. And, that the RNC is on shaky ground at this point in breaking that contract.
The dual Convention idea is a lawyer construct to insulate the RNC from Breach of Contract lawsuits. Not just by the City but, by all the city businesses that will be affected by the loss of business they expected from the convention.

Okay.
See him in court.
No way we have our convention in NC.
Good bye.

Move it to Nashville

Not sure how old Ed Morrissey is, but I was in New York in 2004 when Bloomberg used his money and influence to bring the Republican convention to the Madison Square Garden in New York. Does Ed Morrissey really think it was because the GOP thought they could win New York State?
Of course not. It's all about the energy and enthusiasm transmitted through our TV screens. It's like Trump having an energetic rally all week.
That's why the Dems are doing everything to torpedo it and remove all the energy from it.

Need to pick a state that is on the “bubble” for the election.

Reno NV? Does Reno have a Republican Mayor?
Laughlin NV?
Dont laugh at Laughlin-no pun intended. They can handle a pretty big venue. Besides that, it brings in a healthy bunch from AZ, especially the most conservative Counties in AZ.

I suppose also, someplace in FL?

I know! Marquette MI...LOL! Actually, they have a dome stadium there that can handle it. But the friggan place is Moscow on the lake.

Gettin silly here in my age.

OFF TOPIC: Police reform. Been hearing that a lot past few days. Who’s going to reform the criminals?

ON TOPIC: Could be risky to be outdoors weather-wise, but perhaps some type of awning-like coverings could be erected? Large video screens etc. Glad it’s not me that has to figure out an alternative at this point.

Just keep it in North Carolina and screw the regulations governor Cooper has laid down. What are you going to do? Arrest people?

That would be great to leave it there HOWEVER restaurants won’t be open or other businesses!! Don’t see how businesses can sue when they are on lock down MOVE the damn convention!!

How about Dallas, Texas?

The restaurants are open now. Gyms are still closed until June 29 when we go to phase 3.