The latest standoff between House Democrats and the Trump administration over the testimony of State Department officials has the White House questioning in a new letter sent Tuesday why the House is not voting to authorize a formal impeachment inquiry.

The White House and its Republican congressional allies have argued that such a vote is necessary, and President Donald Trump's lawyers told House Democrats in the letter that the President and his administration won't cooperate in the ongoing impeachment inquiry, arguing the proceedings amount to an illegitimate effort to overturn the 2016 election results. The lengthy letter all but dares House Speaker Nancy Pelosi to hold a formal vote opening an impeachment inquiry into Trump, though it does not explicitly call on her to do so.

But Pelosi has said that Democrats don't need to take a vote and has shown little interest in doing so after she announced last month the House would open an impeachment inquiry, accusing the White House of trying to play politics and arguing that House rules don't require a vote.

The reasons Pelosi is not planning a vote are both practical and political: Taking the step of passing a formal impeachment inquiry resolution is a complicated and time-consuming endeavor that has political downsides, from drafting the exact language of the resolution, to holding a complicated floor debate and to putting some members in a tough spot.

Moreover, having a vote on an impeachment inquiry resolution would give Republicans an opening to argue they should have subpoena power like in past impeachment proceedings, something that Democrats would almost certainly never allow.

It is for all practical purposes...an informal impeachment. They can talk about it, and impressing the public on the targeted end-results. But it’s simply not a formal process.

I would even suggest this...the longer that this chatter continues with a fake-impeachment game...the less that the public will believe anything that Pelosi says. If the House committees don’t get any traction going in October or November....this ‘ship’ is sinking shortly after Thanksgiving.

I noticed this morning that this Barr-appointee....Durham, he’s on a mission and in six months, I think he’ll have 20-odd Obama people in a Grand Jury situation and facing serious issues/charges. Pelosi may be on some pre-counter-job, to stop that Durham court action. If Durham succeeds, even Biden might be dragged into a Jury room and asked questions that implicates him in a serious way.

This is exactly why President Trump is pushing back so hard. He’s smokin ‘em outta their holes again.

Force them to vote or STFU.

This is nothing but another psyop and exploding cigar.

Any dem with a third of a working brain knows they have lost 2020. All they’re doing now is trying to weaken the next Trump administration.

Sane America hates this impeachment crap. Turns out, they really love the Trump economy. Prosperity is very popular with voters.

Ignore *all* polling data. Only hardcore MAGAs will admit to voting for President Trump.

The exact words from the constitution on impeachment are: “The House of Representatives shall chuse their Speaker and other Officers; and shall have the sole Power of Impeachment.”

Note that it doesn’t say the Speaker has the power, nor does it say the Intelligence Committee, it says the entire “House of Representatives”. That takes a vote. 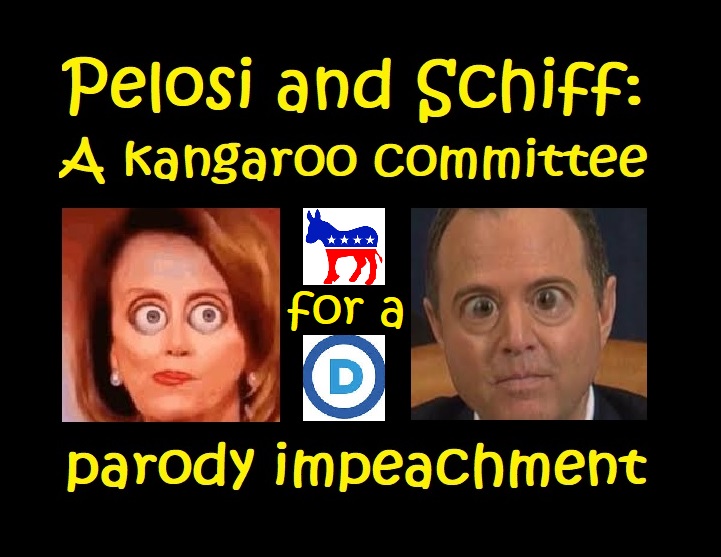 Say what you will about Nancy Pelosi, but she’s no dummy and held off the impeachment fervor as long as she could. She, and other still-rational Dems, knew this was simply a push from the rabid Left, but the general public has no stomach for it.

Now, however, she’s really between a rock and a hard place. To try and back off this nonsense would drive the crazies even crazier, and to go forward will, in all likelihood, cost the Dems any chance at the White House next year — and quite possibly the House, too.