Rabobank: There Is No Way China Is Either Willing Or Able To Stick To The Trade Deals Terms
Trade For Profit ^ | 06/23/2020 | Michael Every of Rabobank, Head of Financial Markets Research, Asia-Pacific

Today we got a taste of things to come when White House China hawk Peter Navarro stated to the press that the US-China trade deal was “over”. Cue a plunge in stocks and in CNY and in bond yields and general risk off. Then cue the inevitable rapid winding-back of those comments from Navarro and Kudlow and Trump, with the former saying his comments had been taken “wildly out of context” (they hadn’t given he was talking about the total collapse of US trust in China) and the latter tweeting “The China Trade Deal is fully intact. Hopefully they will continue to live up to the terms of the Agreement.”

The problem is that this upbeat assessment is also wildly out of context. There appears no realistic way China is either willing or able to stick to the deal’s terms. Even Democrat Chuck Schumer has just retweeted Trump with a few amendments: “The China Trade Deal is fully intact. Hopefully they will continue start to live up to the terms of the ‘Agreement.’” Of course, at this stage Trump is desperate to maintain some semblance of a ‘win’. Yet if no US soybean sales are made in bulk soon could he then turn the trade bazooka on China – perhaps handily timed around the date of one of the planned Trump-Biden debates? Don’t rule it out. 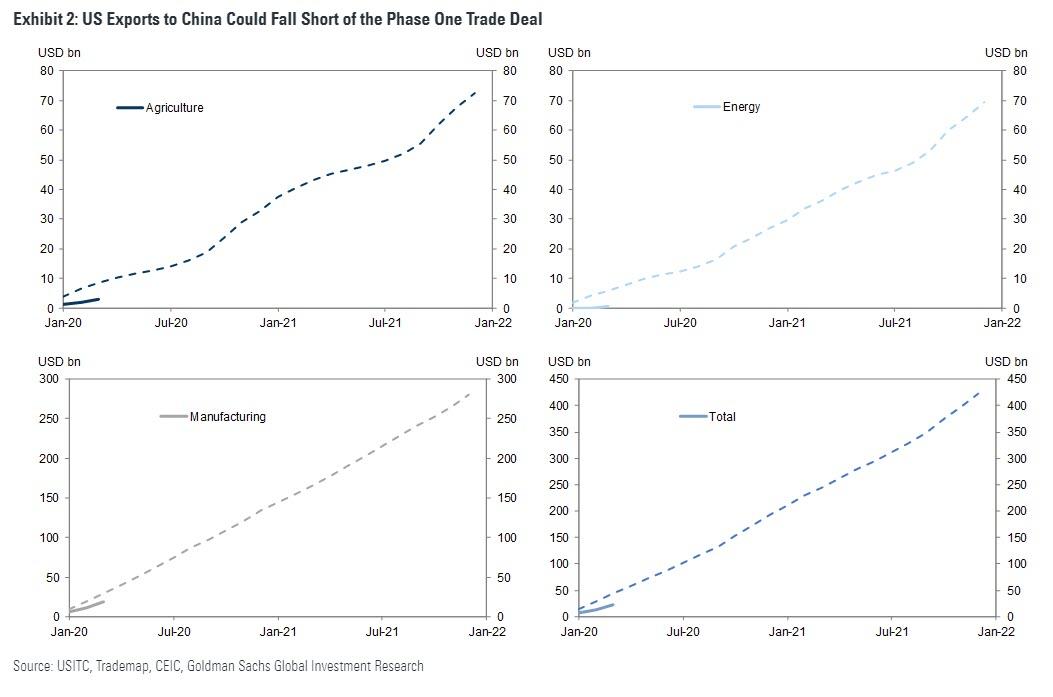 China certainly isn’t doing much to help on a related front. It has just been announced that the controversial new Hong Kong national security law will not be made public in full until AFTER it has been passed in Beijing - within a week it appears. Suffice to say that the details revealed so far certainly tick all the boxes for other US China hawks, such as Secretary of State Pompeo.

Perhaps not only him. Yesterday’s virtual EU-China summit was summarised by the Global Times thus: “China, EU seeks to inject momentum in recovery”. The New York Times says: “Betraying Frustration with China, EU Leaders Press for Progress on Trade Talks”. The European angle, from DW, is “EU chiefs press China on trade, Hong Kong security law”, adding “Tensions have been rising…Top EU officials struck a tough tone during talks Monday, pressing China on its trade and investment relationship and warning of “very negative consequences” if it goes ahead with a proposed controversial security law for Hong Kong.” The EU also added that China needs to “redress” the trade relationship and “resolve concrete problems”.

China is not unaware of where this could all lead above and beyond the threat of seeing exports to the US and India and the EU start to level off or decline. As the South China Morning Post says: “China warned to prepare for being cut off from US dollar payment system as part of sanctions like Russia”.

Yes, that’s still a tail risk; yes, the EU won’t be leading that charge; and, yes, Trump clearly wants to win re-election and taking this kind of step won’t help his farm base. But if his farm base isn’t being helped and he continues to trail in all polls, even in battleground states, do you really want to bet against that trigger being pulled as a conversation/world changer?

Of course, it would mean US stocks plunging. Which might be the trigger for what markets are already eager for: Fed yield curve control (YCC). Will it be a 0.5% or a 1.00% 10-year forever, or a 0.30% 5-year, or both? Bloomberg merrily flags this will be the starting gun for a Buy Everything rally – as if we aren’t in one already.

Yet how has YCC worked out for Japan so far? It remains mired in structural deflation and slow decline, with crisis only being averted by dint of its accumulated savings and large external surpluses. Do we all want to repeat that? It seems we do.

Of course, this presupposes that what the economy has any bearing on markets – which clearly is no longer the case. Markets remain wildly out of context when one considers that global virus infections are over 9 million and rising, with no sign at all of being brought under control, and with millions more out of jobs. Yes, London pubs might be about to re-open under strange new conditions, as will New York bars. Clearly in Mr Market’s mind a cheeky pint or brewski clearly outweighs the global picture. You know what they say: a recession is when someone you know loses their job, and a depression is when you lose yours. Likewise, the virus is an “invisible enemy” when someone you know gets sick, and it’s just one of those things when it is happening in another country. (Or, in the case of the US and Brazil, in one’s own country – or so government critics allege.)

Anyway, it’s all going to be risk on until the next attempt to get markets closer to their actual context. Which will come. That Hong Kong law will be in place in days. Trump just used an Executive Order to expand US visa restrictions until end-2020, closing loopholes deliberately left in the last such visa-related Order. Egypt is talking about squaring up to Turkey in Libya. And it’s 40C/101F in the Arctic circle today.

In China, the negotiation starts after the contract is signed.

They just want to drag out “negotiations” until Trump is out of office.

If Biden gets elected, China will eat us alive.

EMBARGO CHI-COMs and push MADE IN AMERICA