The number of confirmed cases grew 26% from 351 cases in 40 counties one day earlier - a slower growth than in recent days. The number of cases had been up 42% Sunday and 46% Saturday. 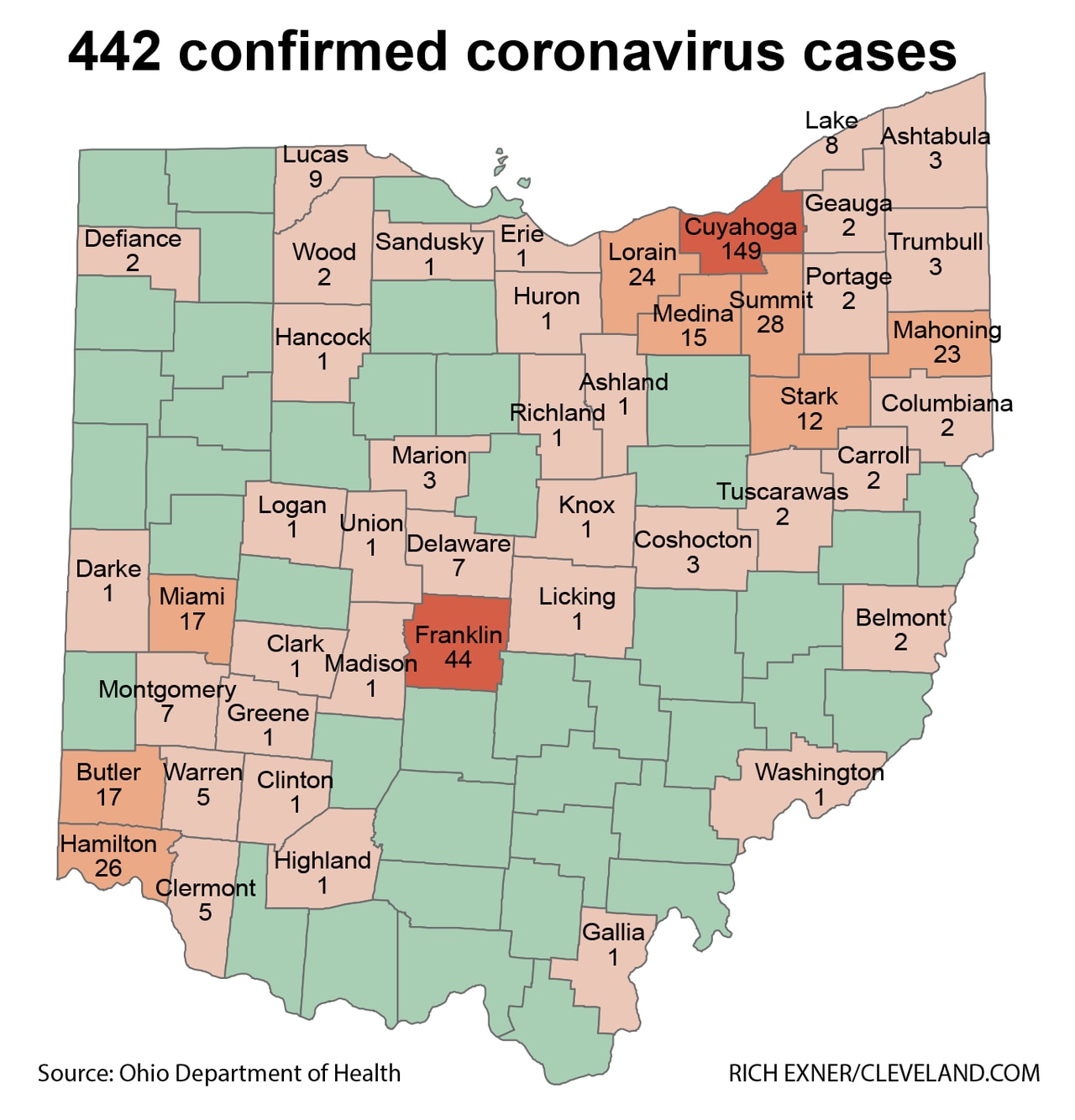 TOPICS:
KEYWORDS: acton; braking; corona; covid19; ohio Navigation: use the links below to view more comments.
first 1-20, 21-22 next last
The article goes on to say: "However, Ohio Health Director Dr. Amy Acton has called the number of confirmed cases the “tip of the iceberg,” repeatedly emphasizing that many more people likely have the virus, some maybe with few symptoms."

Still looking for that illusive 100,000 cases were in Ohio almost two weeks ago.

Ohio is one of the states where the COVID project is showing almost no testing. like today’s numbers are 442 cases, but only 582 tests.

UNtil they can get their testing up by a factor of 10, they have no idea how many cases they have.

THe states I trust are the ones where they have so many tests that their positive rate is under 20%. Virginia has done 4470 tests, 290 positives, a 6.9% positive rate.

After the Ohio top health officer said they have a million cases they don’t know about, or some such exaggerated number.

The first sign that things are starting to improve and the curve may soon be flattening is the decrease in the rate of growth of new cases. When the rate of growth eventually turns negative, this is an important factor in seeing a reduction in the actual total number of cases.

Last week the Cleveland Clinic tested about 2200 in two days of drive through testing but only found a handful of cases. And they were only testing people with a doctor’s note.

How many deaths from it?

Almost no one is getting tested! What would you expect.

They’re not going to report anything except positive test results.

The test count is bogus. There were four drive thru test centers in Cincinnati alone since last Friday. They were all bumper to bumper.

And there were drive thru test centers all across the state.

Ohio is just doing a shitty job of reporting.

And as of yesterday the total infection rate in Hamilton County is .00003198% of the population.

6 deaths, and that number has not changed for days.

When you come to USA, pick it and a screen will open up to show you state by state.

Ohio is a state where there is so much traffic going thru it north to south, east to west....I75, I70. Its a gateway to the rest of the country.

So my thinking is if this virus is as contagious as some say, Ohio ought to be hit a lot harder. I live in Ohio.

We also have the Wright Patterson Air Force Base, Greater Cincinnati Airport and more.

I think Dr. Amy Acton could present a cleaner image, either wash that scraggly long hair or conceal it in nursing cap?

I would argue that unless they do random testing by area and demographic, they'll never have any idea of how many cases they have. They could increase their testing in Cuyahoga, Franklin, and Hamilton counties, but that would only give them an idea of the rate in and around those highly populated counties.

I don't think it would take too many tests to canvas and randomly test the state at large.

Easy now....you're talking about the most powerful person in the state. More powerful than the governor!

She’s (Acton) is just taking orders from the WHO, no leadership at all. Highest paid, $250k annual + perks.
My 10 year old grand daughter could fill the role, probably fewer “ummms” ad nausium. She was an Obama campaign organizer.
She is VERY cute, still, saw her Youngstown area HS pics.
Seems she recovered quickly from her “homeless/gypsy” styled upbringing. Like Dewine, just a bobble headed “YES” person.

If only Trump had all of the doctors on his updates wear white lab coats like Obama did, then we would know he is serious about is words. (satire)

And today’s percent of Hamilton County residents infected is .00004669%

Where does that put us on the bell curve?

one belt running along the route of the old “3 C” highway and a second running along I-70. And a cluster in the north-east where multiple interstates intersect. Meanwhile, not much in the interstate barren southeast section of the state.

Ohio might be one of the states that decided to only report their own testing, and they might only be testing presumptive positives from other tests.