Expect changes to the USWNT lineup vs. Chile  but don't expect any attempt to avoid France
sports.yahoo.com ^ | June 15, 2019 | Doug McIntyre

PARIS — It’s been a major talking point ever since the Women’s World Cup draw back in December. If the United States wins its first-round group here in France, and the host nation tops their own foursome, the consensus best two teams in the competition could meet in a do-or-die quarterfinal later this month in the City of Light.

The possibility of such an encounter well before the final has prompted many to wonder if the French and American teams might strategically opt to not go all-out in the group stage, perhaps setting up an easier path to the July 7 final in Lyon.

We already know the former’s approach. After beating South Korea and Norway, Les Bleues would have to implode spectacularly against Nigeria not to win Group A. What will the U.S. do? A day before the Americans’ second match against Chile (12 p.m. ET, FOX), coach Jill Ellis left no doubt about where the favorites stand.

“I struggle to tell my team not to tackle in training the day before,” Ellis said during Saturday’s pre-match media conference. “I think at this point it’s making sure your focus is on yourself and your performance and you put yourself in the best position to advance in this tournament. For us, it’s making sure that we play as well as we possibly can and win the game.”

5 posted on 06/16/2019 2:07:04 AM PDT by Berlin_Freeper
[ Post Reply | Private Reply | To 4 | View Replies]
To: Berlin_Freeper
One thing the USWNT never leaves home without: its American flag, which is hung up in the locker room before every game.

"The flag was presented to us by four WWII veterans from the cemetery in Normandy in France back in January. We wanted something special to carry with us on this journey and we were fortunate to meet these four incredible veterans," Dell says. "And we walked through the cemetery with them as they were telling us their stories. the flag came down at 4 p.m. and the veterans presented it to the team. So, it's very dear to our heart. and I think it's a really cool culmination is starting in France, flying over American piece of land in France, us traveling with it on our journey and leading us to this tournament and then to a degree the flag coming home to carry us through this World Cup. It's very near to our hearts and means a lot to us."

Rapinoe is so obnoxious, I hope the USWNT loses every game.

Leave it to the sportswriters to look for weird angles. It’s a story that the U.S. won’t try to “dodge France?” If the U.S. wants to win the tournament, we have to play France sooner or later. I’d rather play France in a quarterfinal than in the championship game, with France playing at home.

Once in the knockout stages, most of the games will be decided by one goal, and several by penalties. These will be peer level teams, each of them fully capable, on any given day, of beating anyone in the field.

The U.S. will be a slight favorite in most games, but when a single shot, a ball off the crossbar, a penalty, or a great save can make the difference, that doesn’t mean much. The U.S. edge against the other top teams is mostly consistency and depth. But on any given day, flip a coin.

I do think the U.S. probably has more scoring threats than most of the other top teams, maybe more than anyone else in the field. The most important thing about the 13-0 blowout vs. Thailand is that seven different players scored. And Tobin Heath and Julie Ertz, both dangerous, DIDN’T score. A lot of opponents will try to bunker in, mark Alex Morgan and slow the game. The trick for the U.S. will be to make them pay a price. Morgan has become a very effective playmaker. She’s always marked and often doubled. She’s effective as a decoy, creating space for the other players and laying the ball off to the wingers and attacking midfielders. If the U.S. wins the tournament, that’s how they’ll do it.

I also hate that rug muncher, but hoping for the whole team to lose is a bridge too far.

How about if she gets kicked in mouth, and cuts her own tongue off, so that she can't eat her favorite things?

I see what you did there, lol!

She should have been expelled from the team when she refused to stand during the national anthem. That makes her a traitor.

12 posted on 06/16/2019 4:21:11 AM PDT by Flavious_Maximus
[ Post Reply | Private Reply | To 11 | View Replies]
To: Tea Party Terrorist
It's time to give the Rapinoe thing a rest. This has become a case of the media driving a story long past its sell by date. Rapinoe now stands for the national anthem. She's yielded the point. Stick a microphone in her face and talk politics at her, and she'll dig in and argue her point, but she's not the one pushing the issue at the moment.

Yes, Rapinoe got way out of line when she dragged her personal politics onto the field. She is not the only athlete who has done this; she's just a copycat. But it's bad form. Keep politics off the field. Different sports have managed this in different ways. Football has probably done the worst job, but that's another story. In the case of the USWNT, to judge from external signs, it certainly looks like Rapinoe got a dressing down when she took a knee. She has dialed it back. She now stands for the national anthem, looking miserable but keeping her mouth shut. Let it ride.

I have no inside information on this, but my guess is that sensible people on the team and in U.S. Soccer came down pretty hard. Soccer is likely to become the first sport in which a women's professional league will establish itself on a viable, non-subsidized basis. Two earlier women's professional leagues folded but the NWSL seems to be holding its own. A couple of the franchises are quite successful, though most play to very small crowds. National Team players get a big bump from that, but most NWSL players are paid a pittance.

Again, the National Team players have a separate and much higher income stream, but regular NWSL players are are like the baseball and football players of ancient days. They're in it for the love of the game. A lot of teams even provide housing; they find responsible couples with big houses and spare bedrooms to host a player during the season. (It's not as odd as it might sound; most of us probably know people who have hosted foreign college students, and very much enjoyed the experience. Hosting a young lady soccer pro who is just a year or three or five out of college is probably very similar.) The players either work off-season jobs or go abroad to play in foreign leagues whose seasons don't overlap with the NWSL.

We'll have to see how the numbers work out as time goes on, but the point is, Rapinoe was creating a divisive distraction in a league that can't afford that kind of nonsense. I think she got told that, big time. She also tore an ACL before the last World Cup, and she was probably the only person who thought she'd come back from that at her advanced age. I suspect she was told she'd be out of the league if she didn't tone it down.

U.S. Soccer does need to get off the Rainbow Flag bandwagon. The BLTQXYZ crowd is pushing all major institutions to make homage, and in women's sports, I'm sure there's an extra push coming from gay players. The men's team has sported rainbow colors as well; this isn't just a women's team issue. But sports generally, including soccer, should firmly draw the line, as should corporations, universities, etc. But that's a separate argument.

U.S. women's soccer is trying to build a fan base. They do some smart marketing. Look at the former players who are doing the commentary on tv. They are a very impressive group of now middle-aged women. (And just about all of them are married with children, which is probably very self-conscious marketing by U.S. Soccer.)

As long as they don’t have to play any boys U-17 teams!

So their soccer (and maturity) level is roughly akin to 12 year old boys.

And please read the entire story of Jaelene Hinkle and US soccer if you want to see who you are cheering for.. She is a devout Christian who dared to stand up to Jill Ellis ('married' lesbian with accessory daughter) and US soccer forcing deviancy down our throats and more importantly, the throats of American youth. I read soccer threads on other sites and you know what has become a problem in girl's youth club soccer? Girls dating teammates. Wonderful, huh?

Well Jaelene Hinkle has been exiled from US soccer. And if you read the story with wide open eyes, you will realize it is because she is a true believer in Jesus Christ.

That is where US soccer is and that is who you are cheering for.

I’ll be rooting for Chile today,

Maybe the men can MAGA next year in London.

Rapinoe is so obnoxious, I hope the USWNT loses every game.

I also hate that rug muncher, but hoping for the whole team to lose is a bridge too far.

At this moment, I would use one word to describe my attitude about USWNT...Indifference...

If the team does not win World Cup, I would not be upset...I will just say, “Whatever”.

If the team does win World Cup, I would not be celebrating...I will just say, “Whatever”.

I have never felt this way about USWNT before...
Blame Ms. Rapinoe for my change in attitude...

I will perfectly willing to forgive this team for not showing sportsmanship in the Thailand game...My issue was with excessive celebration not with scoring 13 goals.
But, I have a tough time forgetting about Ms. Rapinoe looking unhappy during national anthem...I like to watch USWNT but I am unwilling to tolerate certain things...

About USMNT, I feel differently...I want them to win Gold Cup...I will be upset if it does not do very well in Gold Cup...

They got stomped by a U15 boys team. That is 13 and 14 year olds.
So their soccer (and maturity) level is roughly akin to 12 year old boys.

Score was 5-2 so our Women did well enough to score 2 goals in a "very informal" match. I don't know where you get 12 years olds from cramps but that says a lot about your own maturity level against current World Champions who also have Olympic Gold Medals.

BTW see the height difference from the opposite sex.

Of course, this match against the academy team was very informal and should not be a major cause for alarm. 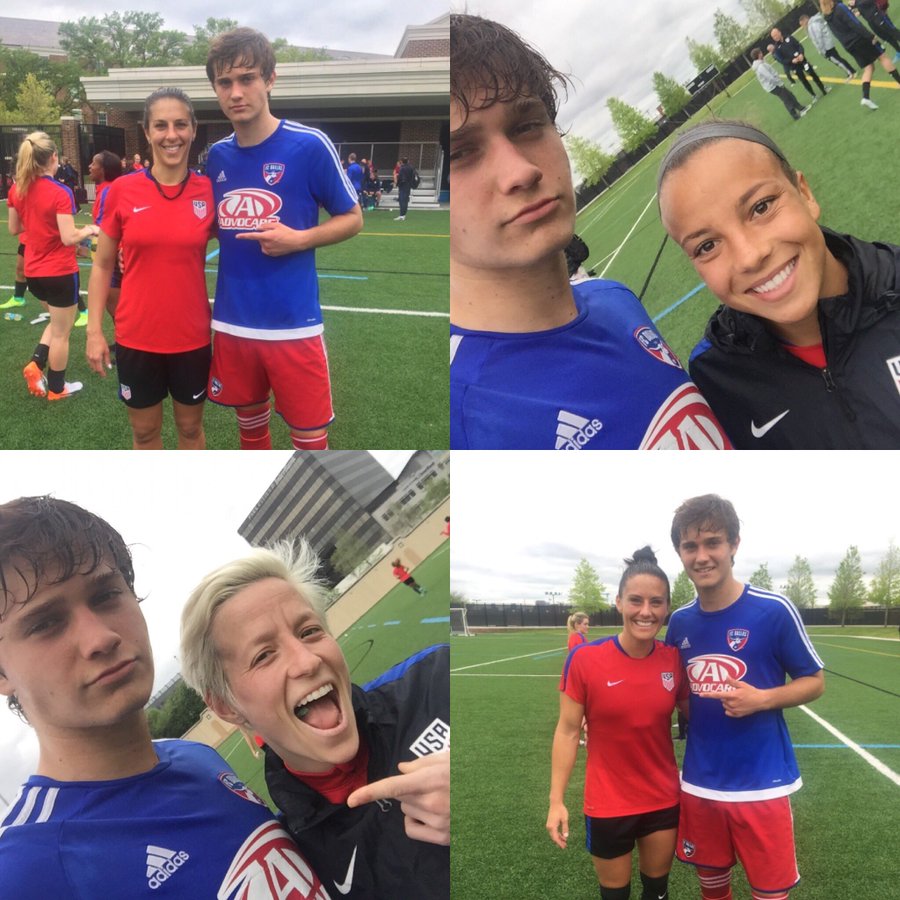