Wow new thread already. Thanks for all you do.

Hopefully some more Q drops will come this weekend.

Would you believe the NY Times finally printed a story on Keith Raniere and NXIVM? Titled "Once Idolized, Guru of Nxivm ‘Sex Cult’ to Stand Trial Alone" Naturally, it glosses over any larger connections that we've been looking at, and includes just enough tawdry details to draw their audience's attention. The comments on the article are a mix of tragedy and comedy. Suffice it to say, the comments quickly devolve to Trump-bashing. I think I've found Q's "4-6%"...

The judge has made a ruling whether the prosecution can introduce Raniere's photos of his then 15-year old rape victim. They can introduce the photos as evidence of predicate acts related to his current charges.* Note, the child crimes are NOT being prosecuted in this trial. Once this trial is over, we would anticipate that this evidence will be used by the Northern District of NY, where the crimes occurred, in a follow-on trial against Raniere and others.

*Note: while I was composing this, the article linked above now shows a 404 error. Also, all stories on the Frank Report website after April 30, have disappeared. In case it's just a hiccup, I'm leaving the link above even though it goes nowhere at the moment.

Here is another article that discusses the ruling.

Judge Garaufis will need to rule on three more topics before trial starts on Tuesday. First, whether NXIVM corporation can assert attorney-client privilege. Clare Bronfman and Nancy Salzman are still on the board of directors. If they try to assert privilege, I can imagine the judge will consider that in a negative light at their sentencing.

Second, can a Jane Doe testify that Raniere raped her repeatedly at the age of 12-13 YO? Those charges are also not on the table at this trial, and again the prosecution is seeking to show a pattern of criminal predicate acts to establish the racketeering and conspiracy charges that Raniere faces.

Third and finally, will witnesses have to reveal their full names to the public, or will they be allowed to use aliases or first names only?

Court will convene on Monday to complete the process of selecting 12 jurors and 6 alternates from a pool of around 50. Defense will have ten opportunities to disqualify jurors, and the prosecution will have six.

The judge has ruled that Nancy Russell can move from NY back to her family in Georgia. She had made this request, citing she couldn't find work in NY. Because of her probation, the judge had to approve it. He also approved her request to not have to continue wearing her ankle locator. Odd. Oh, she's a bookkeeper. Don't they hire bookkeepers in NY? She's still a felon no matter where she goes. Her sentencing is in July.

Three more days. Will Raniere survive the weekend before his trial starts?

Perhaps something for the “No Arrests” crowd?
(From QResearch...)

At least 82 people have been arrested in a large multi-state
child exploitation sting that spanned across eight different
states.

The sting, dubbed Operation Southern Impact III, spanned
four months and eight southern states from Florida to West
Virginia. All of the men and women arrested are accused of
either possessing child pornography or attempting to have
sex with a child.

31 people were arrested in Georgia alone, including a county
employee, a fireman, a youth group minister, a former high
school band director, and a military veteran, among others.

“I do not believe Attorney General Barr lied; I believe he’s
been very transparent in all of this,” McCarthy told
reporters Thursday afternoon. “I think if people are looking
at who has lied in the process, simply look at Chairman
Nadler.”

The combative remarks from McCarthy, a close ally of
President Trump, came after Nadler staged a Judiciary
Committee hearing with an empty chair. Barr backed out of
the hearing after objecting to Democrats’ demand that staff
attorneys be allowed to question Barr in addition to
lawmakers.

“Chairman Nadler asked the attorney general to come and he
said yes. After the attorney general said he would come to
the committee, to speak to every member, they moved to
change the rules,” McCarthy said. “The only time an
individual, a staffer questioned somebody was during
Watergate. Nadler has been wanting to impeach the day after
the election.”

A Nadler spokesman did not immediately provide a comment.

And more relevant to your post, also from QR....

In the case of the U.S. v. Keith Alan Raniere, I see no
reason not to identify John Doe 2.

Bronfman was a billionaire and before and after he died, he
left Clare money. I estimate it to be about $400 million.
Clare squandered much of that on her Vanguard, Keith Alan
Raniere, over the 15 years she was his enabler, henchwoman,
clown and dupe.

She is believed to have a net worth now of about $200 million.

Her father, Edgar was married five times (twice to his third
wife, Clare’s mother.) He had five children with his first
wife, Ann Margaret Loeb: They are Samuel, Edgar Jr.,
Matthew, Holly and Adam Bronfman.

Pretty funny that most of the House Judiciary committee Democrats are lawyers, yet they threw a hissy because Barr would not subject himself to being interrogated by their STAFF LAWYERS. I guess even they realize they’re just not very smart or very good at their jobs.

I hope Democrats will have some enthusiasm for oversight of an out-of-control DOJ and FBI.

“I guess even they realize they’re just not very smart or
very good at their jobs.”

House Judiciary Chairman Jerry Nadler (D-NY) on Friday gave
Attorney General Bill Barr an ultimatum — comply with the
“counter offer” or the committee will move forward with
contempt of Congress.

“The committee is prepared to make every realistic effort to
reach an accommodation with the department,” Nadler wrote in
a letter to Bill Barr on Friday. “But if the department
persists in its baseless refusal to comply with a validly
issued subpoena, the committee will move to contempt
proceedings and seek further legal recourse.”

Nadler gave the Justice Department a 9 AM Monday deadline to
comply with the committee’s new offer, which includes
allowing more members of Congress to look at a less-redacted
version of Mueller’s report. Nadler also wants Barr to seek
a court order to grant lawmakers the right to view the
underlying grand jury material — Barr blocked the grand jury
material from the public and Congress to protect innocent
people who have not been indicted.

Under special counsel rules, Attorney General Bill Barr
didn’t even need to release Mueller’s report to the public
or to Congress. The unredacted version of the report is in a
SCIF [Sensitive Compartmentalized Information Facility] for
certain lawmakers to view, however, only two lawmakers have
actually viewed the less-redacted version of the report.

“[T]he department has offered no reason whatsoever for
failing to produce the evidence underlying the report,
except for a complaint that there is too much of it and a
vague assertion about the sensitivity of law enforcement
files,” Nadler wrote.

Barr was scheduled to appear before the House Judiciary
Committee on Thursday but things began to go sideways after
Chairman Jerry Nadler proposed changes to the format.

Bill Barr was a no-show and refused to testify before the
House Judiciary Committee Thursday morning.

House Judiciary Chairman Jerry Nadler dropped the gavel
anyway and blasted the empty seat where Barr was supposed to
sit.

He’s that insane — this is all for show.

House Judiciary Committee members under the leadership of
Chairman Nadler voted Wednesday morning to have staffers and
experts question Attorney General Bill Barr in their
committee hearing on Thursday — this kind of format is
unheard of.

In over 206 years of the House Judiciary Committee, staffers
have never questioned a witness, let alone the US Attorney
General, in an oversight hearing.

Nadler and the Democrats did this on purpose to create chaos
and make it appear that Attorney General Barr has something
to hide.

One more choice of Notable Notables from QR...

Attorney General William Barr told the Senate Judiciary
Panel this week that he has assembled a team at the Justice
Department to probe whether the spying conducted by the FBI
against the Trump campaign in 2016 was improper, reports
Bloomberg.

Barr suggested that he would focus on former senior leaders
at the FBI and Justice Department.

“To the extent there was overreach, what we have to be
concerned about is a few people at the top getting it into
their heads that they know better than the American people,”
said Barr.

Barr will also review whether the infamous Steele dossier -
a collection of salacious and unverified claims against
Donald Trump, assembled by a former British spy and paid for
by the Clinton campaign - was fabricated by the Russian
government to trick the FBI and other US agencies. (Will
Barr investigate whether Steele made the whole thing up for
his client, Fusion GPS?)

“We now know that he was being falsely accused,” Barr said
of Trump. “We have to stop using the criminal justice
process as a political weapon.”

Mueller’s report didn’t say there were false accusations
against Trump. It said the evidence of cooperation between
the campaign and Russia “was not sufficient to support
criminal charges.” Investigators were unable to get a
complete picture of the activities of some relevant people,
the special counsel found.

Although Barr’s review has only begun, it’s helping to
fuel a narrative long embraced by Trump and some of his
Republican supporters: that the Russia investigation was
politically motivated and concocted from false allegations
in order to spy on Trump’s campaign and ultimately undermine
his presidency. -Bloomberg

As Bloomberg notes, Barr’s review could receive a boost by a
Thursday New York Times article acknowledging that the FBI
sent a ‘honeypot’ spy to London in 2016 to pose as a
research assistant and gather intelligence from Trump
foreign policy adviser George Papadopoulos over possible
Trump campaign links to Russia.

It’s all grandstanding by Nadless. He knows the law, he maybe bad at it but he is an attorney. He also knows if he doesn’t act all Tough Guy about Barr his own party will demand he resign his chairmanship and all the free chow...I mean perks that go with it. On the other hand the polling is no doubt telling them how far they are going out on a limb on this whole business, and that their antics are going to end up hurting their own candidates.

Barr is an alpha. Nadless is something less than an omega. Alphas do not kowtow to less than omegas... 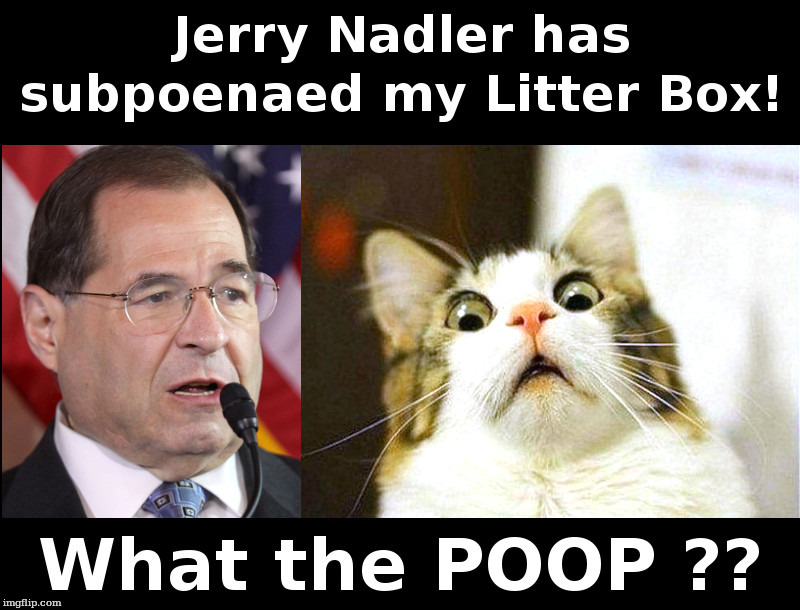 "aquired" from a thread in the Forum: Winter is here, Liberals

You mean the guy that appointed Huber and Horowitz to investigate everything that is starting to come out now that Mueller is done?