I could punch her in the face: Libertarian student draws ire for exposing biased UWisc classes
The College Fix ^ | 5/25/2017 | JENNIFER KABBANY - FIX EDITOR

Her target? Biased classes offered through the public university system that indoctrinate rather than teach, and “degrade capitalism, praise Marxism and encourage a ‘social justice warrior’ ideology,” she wrote in her piece, headlined “Top Five Wasteful Classes in the UW System.”

Yep. When a political discussion assumes that the opponent has no well meaning, calling them racist what not, we are going down the Hitler youths or worse.

Would any of you punch this nice looking girl in the face? It takes a liberal.

Teaching for Social Justice at UW-Superior; the History and Politics of Hip Hop at UW-Platteville; Exploring White Privilege at UW-La Crosse; Culture of Third Wave Feminism at UW-Eau Claire; and Class, State, and Ideology: An Introduction to Social Science in the Marxist Tradition at UW-Madison.

Good for her. She’s got guts.

I admire her fortitude, I feel most inclined to Libertarianism myself for the most part. There’s hope after all. 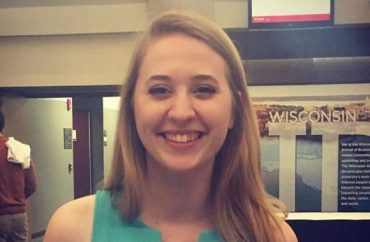 Any guy who would even speak of "punching her in the face" is not a snowflake, he is a punk and really needs an arse whupping to improve his perspective on life.

That says it in the proverbial nutshell.

Punks can be and often are snowflakes. Instead of reacting to microgressions by hugging their teddy bears and kneading play doh they want to hit somebody while they suck their thumbs.

They are complete totalitarians, Hitler Youth or Red Guards who hate libertarians probably even more than they hate conservatives. They also like Islam, though Islam does NOT like them!!!;)

12 posted on 05/25/2017 8:17:54 PM PDT by Frank_2001
[ Post Reply | Private Reply | To 1 | View Replies]
To: Beave Meister
David Horowitz was one of the first to call attention to the growing use of politically correct language, to the exclusion of "derogatory" or "sexist" words, by academics and students on college campuses twenty-some years ago. That was before the feminazis and SJW's gained control of whole departments in many colleges (and entire colleges in some cases: see Antioch College as a template that radicals would aspire to emulate elsewhere) where students now must adhere to a "speech code" that stifles dissent, free expression and, to a large degree, anything resembling individualism. It's all groupism: identity by race, sex, age, height, weight, class, religion or lack of, and whatever else the academics can dream up to make hapless students feel inferior and ashamed if they don't fit into a disadvantaged group.

Public universities are at the center of this madness, of course. The fact that taxpayers must pay the bill for worthless courses is a valid complaint, but as we have seen for decades that gains no traction with those in charge, because the administration and board of regents have other priorities. It doesn't matter if the board is elected or appointed; its primary duty is to secure more funding for the college by way of government grants, bequests and alumni donations. It's not far-fetched to believe courses in "gender studies" and such are fully-funded by super-wealthy liberals, just as corporations sponsor professors ("endowed professorship") in business schools. Thus we taxpayers may not have a financial stake, or a very big one at least.

The larger issue, IMHO, is not the esoteric courses promoting Marxism, male hatred and such to a small fraction of students. There will always be leftists going to college primarily to reinforce socialist or communist views they were brought up with at home, or in their home country.

The more important problem we have to confront is a bias in America's larger universities, and quite a number of small colleges, against capitalism, toward redistribution of wealth and a disparagement of western civilization in general. This bias permeates the social science, liberal arts and humanities departments where, coincidentally, snowflakes are abundant. But it isn't exclusive to those areas. Think "global warming," for instance. Science is about getting federal grants these days, not about the scientific method. Follow the money, as someone said.

It's not like this phenomenon of safe zones and false accusations and suppression of certain un-PC ideas began with Trump's inauguration. It's been in the works for decades. Read (at least the last chapter of) Jacques Barzun's magnum opus, From Dawn to Decadence for the great cultural historian's insights on how we got in the fix we're in. It's a culture war we're in, not just one of killing the terrists over there so they won't come over here.

A great irony: Columbia University, where Dr. Barzun taught for something like a normal lifetime, is just as full of worthless courses as the rest of them, and probably has a similar proportion of snowflakes per class as Wisconsin or Cal Berkeley.

But then, what do you expect? Columbia is not Hillsdale.

Cockroaches hate it when a stray beam of light falls on them....