It can take just 90 seconds and a rubber band.

Curious cooks have begun hacking carbonators, the soda-making machines that are proliferating in American home kitchens. Most buyers are happy to use them for their intended purpose: turning tap water into sparkling water. But off-label, they have been used to make herb-infused sparkling wine, newfangled sangria, heady cocktails and nonalcoholic — but intoxicatingly delicious — sodas.

Recently, in a storefront laboratory in Chinatown, Piper Kristensen, a bartender and occasional lab assistant who works for the avant-garde bar Booker and Dax in the East Village, studied a SodaStream Penguin. It had arrived fitted with a new feature, a device that was preventing him from carbonating the clear tomato juice he had purified in a centrifuge. He probed the carbonator’s dispensing valve, figured out that its plastic collar had to be raised, and twisted on a rubber band. In short order, he poured a fizzy cocktail of tomato juice, vodka and sugar into elegant cordial glasses.

He handed one to his boss, Dave Arnold, formerly the director of culinary technology at the International Culinary Center as well as an owner of Booker and Dax. Mr. Arnold sipped. “It tastes like ketchup soda,” he said. “Maybe you should go back to the egg cream.” Mr. Kristensen is on a quest to produce a carbonated egg cream, but as it turns out, it is difficult to carbonate milk. (Its proteins cause excessive foaming.) But as he showed, it is extremely easy to carbonate many other liquids, to delicious effect.

So far, New York City’s few remaining seltzer-delivery men are safe. But the home brew looks poised to take over the market.

Americans bought more than 1.2 million home carbonators, like the SodaStream and the SodaSparkle, in 2012 alone. In April, Samsung is to roll 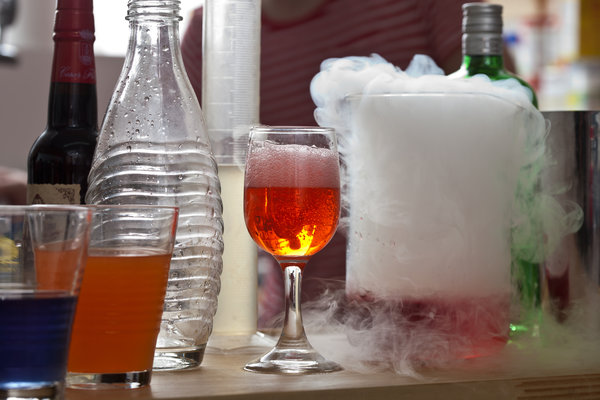 Why don’t liberals whine about trendy crap like home carbonators contributing greenhouse gases, but they whine about natural things like cow farts??

I’m enjoying one of my home brewed Bourbon Barrel Porters.

Why don’t liberals whine about trendy crap like home carbonators contributing greenhouse gases, but they whine about natural things like cow farts??

There you go again! Being Logical...Hurrumph!

A make your own 32 oz soda article in the New York Times. Way to get around Bloomberg. Next week they’ll have an article about printing your own 30 round AR-15 magazines.

Used mine to make spritzers and cranberry/vodka.

If I could, I would make all of the sodas non-carbonated. The appeal of carbonation has always been a mystery to me. Drinking carbonated beverages is so painful, I think it must be comparable to trying to drink powdered glass.

But I think a good argument can be made for fizzy (carbonated) and foamy, as if not as secondary flavors than perhaps tertiary ones, more oriented towards textures, like crunchy, chewy, crispy, crystalline, powdery, earthy, fishy, juicy, squashy, runny, solid, hard, soft, tough, soggy, firm, and creamy.

The trick for good cooking is to have a good balance between complementary flavors, textures and mouth feel.

I have a medical condition that’s kept me from drinking carbonated beverages since 2010. :-(

A story about fizz. Literally.

“Why oh why is our newspaper going bankrupt?”

“I don’t know. We’re so cutting-edge and trendy. We’re as current as ‘Sex In The City.’ All the news we think fit to print. What is the problem with our readers?”

I bought a Sodastream 5 or 6 years ago. Love it!