The death of the child, Sean, comes less than a month after Mr Tsvangirai's wife Susan died in a car crash. 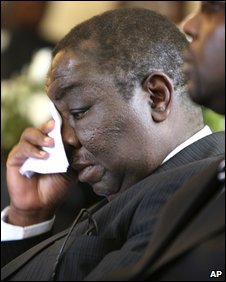 Here he is during happier times

Mugabe must be zimbabwean for DeMedici or something. Either he’s the luckiest man and his enemies are really unlucky, or he has the best assassins in the hemisphere.

Hm... turns out old Col. Cooper was right all along. Who knew?

I never heard of these folks ever.

An official at Dicksen & Madson said he secretly taped a meeting with Morgan Tsvangirai, president of the opposition Movement for Democratic Change, where they discussed removing Mugabe from power. Tsvangirai was apparently unaware of the firm’s connection to the government.

The grainy footage was broadcast on Australian television Wednesday night.

Tsvangirai told The Associated Press the tape was “contrived.”

He refused to comment further, but opposition spokesman Learnmore Jongwe said Tsvangirai “has no plan, desire or motive to eliminate President Mugabe. The MDC president believes in a peaceful and constitutional transfer of power through the ballot box.”

A presidential election is scheduled for March 9-10. Tsvangirai poses the greatest challenge to Mugabe’s 22-year rule since Zimbabwe gained independence from Britain in 1980. Mugabe has become increasingly unpopular amid the collapse of his country’s economy and political violence against opposition supporters.

The opposition officials appeared unaware the firm had done work for Mugabe’s government for “a few years” and believed it had connections to assassins, Ben-Menashe said. It is currently representing the government as lobbyists.

At two meetings in London, Tsvangirai raised the subject of assassinating Mugabe and arranging a coup d’etat, said Ben-Menashe, who attended the meetings. He said he had an audio tape of one of those meetings.

A third meeting was arranged in Montreal with a hidden camera that secretly taped the proceedings, he said.

That tape aired Wednesday on SBS television’s “Dateline” program. It showed an aerial view of four men sitting around a boardroom table. The black-and-white picture was grainy and the faces of the men - including the one identified as Tsvangirai - were largely obscured.

“The MDC, represented by the top man who’s sitting here right now, commits to ... the coup d’etat or the elimination of the president,” Ben-Menashe said on the tape.

During the meeting, the man identified as Tsvangirai expressed concern the military might take over if Mugabe were “eliminated.”

But he also expressed hope “the MDC on the one hand and the army on the other can work together to ensure a smooth transition toward democracy through the electoral process, even if it means delaying the election.”

The opposition said the story was part of an ongoing government smear campaign intended to distract people from the important issues of joblessness, AIDS and food shortages.

The Zimbabwean government did not immediately comment on the accusation. Under security laws passed last month, acts of “insurgency, banditry, sabotage or terrorism” carry a penalty of life imprisonment.

Zimbabwe has been wracked by political violence over the past two years that human rights workers, opposition officials and international observers blame mainly on ruling party thugs’ efforts to intimidate opposition supporters in advance of the election.

Tsvangirai himself has been the target of several violent attacks blamed on ruling party henchmen.

EU deadlocked with Zimbabwe over election observers [Excerpt] It was not clear what action the government would take if Schori and other barred Europeans traveled widely around the country and visited areas not on regular tourist routes.

The EU has warned Zimbabwe (Mugabe) of sanctions unless the elections are free and fair, and unless observers and international journalists are allowed to work unhindered.

Political violence has intensified ahead of the presidential vote in which Mugabe, 77, and his increasingly unpopular ruling party face opposition leader Morgan Tsvangirai, 49, a charismatic former labor leader. [End Excerpt]