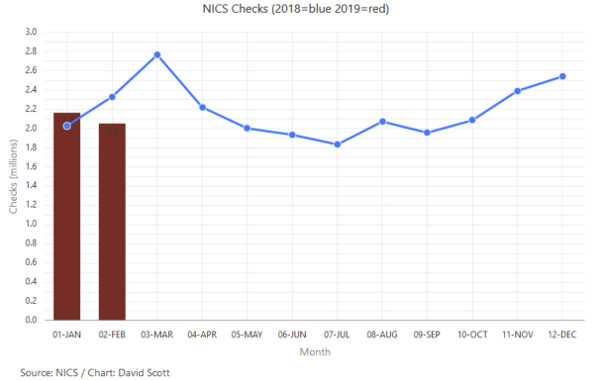 In the Trump era of the National Instant background Check System (NICS),  the number of NICS checks has remained high while the number of gun sales has trended downward. This has been called the "Trump Slump" in the firearms industry. In February of 2019, the Trump Slump dropped a bit more.

NICS checks contain many more checks than just those for purchasing firearms. Many of them are for firearm permits and permit rechecks.

With both checks for firearm sales and checks for permits and permits rechecks decreasing, the prospect for gun retailers, gun manufacturers, and ammunition retailers and manufacturers might appear disheartening.

With the House passing infringements on the right to keep and bear arms, gun sales are likely to increase in March of 2019.  March tends to be a little higher than February for sales, but not by a great deal.  Last year, March was significantly lower in NICS background checks than February. But that is not the overall trend.  Of the last 11 years, seven have been higher in March, and four higher in February.

The March, 2019 numbers will tell us if consumers are concerned enough about the Democrat efforts to pass more gun control to change the Trump Slump into a Trump Bump.

The numbers of firearms in private hands in the United States continue to climb, in spite of lower sales in February of 2019. The lower NICS checks in February still equate to an increase in the private stock of firearms of over a million. Americans are buying a lot of firearms, even at a slightly lower pace.

By the calculations first pioneered by Newton and Zimring, then continued by Gary Kleck in Point Blank: Guns and Violence in America, published in 2005, there are now over 432 million privately owned firearms in the United States.

At the current rate of increase, the United States will reach 500 million privately owned firearms sometime in 2024.

With more and more states using CPL in lieu of a NICS check, and more people getting their NICS card, the number of NICS checks is becoming a less reliable way to measure total gun sales.

In the last eight years, I’ve purchased 6 guns and had only one NICS check, and that is because Dunham’s Sports has a corporate policy to run a NICS checks even for CPL holders.

There will be fewer nics checks as more states pass constitutional carry (no permits).

We have no more room in our safe.

No such thing. I have reached Minimum Money on occasion though.

My safe is full but I can always add to my ammo stash.

This is good news in a way. Gungrabbers think sales are off so they can still go “3% of gun owners own 90% of the guns!! They’re a shrinking minority, we can punish them at will!!”

The war against liberty goes on.

Yu know, after the first couple of hundred guns, you really don’t need many more.

After the Obama years, most sane people who wanted guns had already got them ???

What were the statistics leading upto the 2016 election where that traitor hillary MIGHT have become president ??????

Most right thinking people armed up and stocked up prior to the election in case of a win by Hillary.

I recently had to add a shelf and do some serious re-arranging. I used to keep some gun-related non-firearms in my safe. No more. I've got odds and ends all over the place now.

All the illegal guns and weapons getting shipped in from China every day don’t count at all.

“I used to keep some gun-related non-firearms in my safe.”

We managed to wedge in vital documents. Time for a bigger safe.

We added an underground space that’s 10 x 20 - that should be good for a few more years. Then we’ll build another one.

Agreed,
We Will have to get a Bigger Boat!

I’ve done my best, especially in the C&R trade. Somebody help me out. Now, if somebody were to buy me a gun or two...

Tell me about it. My safe has become totally overwhemed. This summer I'm going to pull the safe out and turn that whole closet into an armored gun storage locker.

Could be. Prices have been low. Could be fewer multiple gun purchases. too. 1 gun or 6, only one check is needed.