[Try this for starters: Check the date on those photos of the hooker. See? No where near the realm of possibility.]

THIS IS HOW THE ORIGINAL PUBLISHER OF THE FALSELY IDENTIFIED IMAGES EXPLAINED HIS PART IN THE FIASCO:

It’s amazing what there is on the internet. A geneological researcher has emailed me with three pictures of Obama’s mother in the nude. That would be of trivial interest except for the setting in which the picures were taken. They were clearly taken in a sophisticated mid-century apartment and my correspondent suggests that the apartment details could be used to identify the photographer. He feels that the photographer is the Communist “Frank” whom Obama mentions as his mentor. That Frank was so intimate with Obama’s mother would support the contention that Frank was in fact Obama’s father. Various bloggers have pointed out how similar Obama looks to “Frank” and the coverup of Obama’s birth certificate is certainly very suspicious.

I give below part of the email from my correspondent:

By pure serendipity I found a photo of what I believe is Stanley Ann Dunham; two more I found through sheer plod. They are taken before Christmas by the decorations and unopened presents. Also a stereo and records that an expert could confirm as jazz records are in view.There is a distinctive grain to the wood floors. I do research including genealogical and had downloaded everything I could find. Not much. So when I saw the picture, I locked on the the ear lobes, chin, eyebrows. It is she. A nude photo,not distasteful, but posed, I believe, by a mature man who knows what he likes, including jazz and now we know young girls. One could ascertain the location of where the photos were taken.

And the shoes..not indigenous to Hawaii,but maybe not unsual for Helen Canfield Chicago socialite and Marshall’s second wife. The photos are important in the sense that they explain the going to Chicago and the immediate acceptance by the hard left, if his father is Frank Marshall Davis, not just his mentor.

The image links in his comment are dead, of course. I traced the images to a mildly pornographic website archive by the identification shown on one image, but by that time, the images had been removed. Not long after, the website featuring the images amongst its collections, had itself, disappeared.
We were then treated to a presentation by the mockumentary producer, Joel Gilbert, to a book and CD entitled ‘Dreams From My Real Father’ in which he attempted to convince, with much fanfare and fake information, that Frank Marshall Davis was the ‘real father’ -

However, it was then clearly shown by an ex freeper, the libertarian blogger Barackryphal

THE PHOTOGRAPHS WRONGLY IDENTIFIED AS STANLEY ANN DUNHAM APPEARED IN EXOTIQUE MAGAZINES IN 1958. 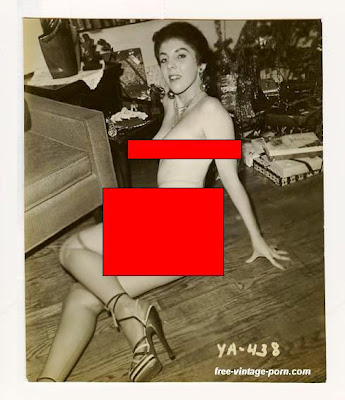 The images of Marcy Moore appeared on free-vintage-porn.com YA-438 had been removed. Published in Exotique Magazine in 1958, means that Stanley Ann Dunham would still have been in high school, and was certainly NOT in Hawaii.