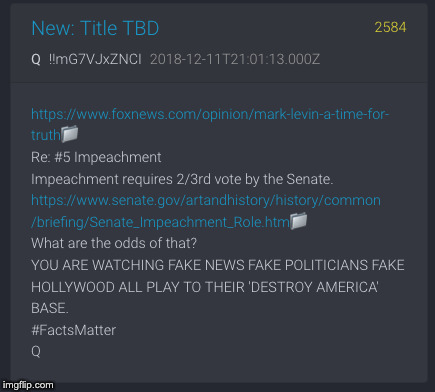 Q !!mG7VJxZNCI ID: 97260a No.4260467
Dec 11 2018 16:01:13 (EST)
https://www.foxnews.com/opinion/mark-levin-a-time-for-truth
Re: #5 Impeachment
Impeachment requires 2/3rd vote by the Senate.
https://www.senate.gov/artandhistory/history/common/briefing/Senate_Impeachment_Role.htm
What are the odds of that?
YOU ARE WATCHING FAKE NEWS FAKE POLITICIANS FAKE HOLLYWOOD ALL PLAY TO THEIR ‘DESTROY AMERICA’ BASE.
#FactsMatter
Q

Most of us could think of dozens, probably hundreds, of people we think are more noteworthy this year.
I would pick Q. :-)
Q’s cool, and all.

But what about ME?!?

Um.... baggie, perhaps you should remember that the “Oracle” IS every bit of as much of an Editor/ Purveyor of Public Truth/ News outfit as “Time” is.... if not more so!

Perhaps you should run a survey of FReeQs.... or just exercise your own Editorial license, and pick the “ORACLE PERSON OF THE YEAR.”

1. A sitting president CANNOT be indicted. That’s official DOJ policy since 1973. Neither the Special Counsel nor the Southern District of New York (SDNY) nor Deputy Attorney General Rod Rosenstein can defy that 45-year-old policy.

2. SDNY is NOT expert in campaign finance violations and neither is the Clinton appointed district judge. They rarely handle campaign finance cases. The left-wing media and politicians are regurgitating what the prosecutors have merely filed in their own self-serving brief. The media and others intentionally refuse to look at the actual rules and context. They refuse to even question what these prosecutors have thrown together.

3. The actual campaign rules and context do NOT include Non-Disclosure Agreements (NDAs) or infinite other contracts, payments, arrangements, acts of a private nature, etc. as campaign contributions. This is normal human behavior and was never intended to be regulated or reported. SDNY is dead wrong. And these private payments can be made in any manner or any amount. Again, they’re private payments involving private matters. To underscore, there’s no reporting requirement because they’re not campaign payments made with or without campaign funds.

4. SDNY inclusion of these charges in the Cohen plea deal was a sleazy political and PR attack against the president by an office coordinating with Mueller and aligned with Comey. SDNY knew Cohen would plead. It, therefore, knew its absurd allegations would not be tested in any courtroom — district, circuit or Supreme Court. If they were tested, SDNY would be hammered like a nail. But it knew the left-wing media and politicians would use the mere over-the-top allegations from its office, with absolutely nothing more, to claim the president committed campaign felonies. No due process. No assumption of innocence. They knew they couldn’t charge a sitting president. Thus, they convict the president in the press, not only an extreme act of professional misconduct but a violation of the very purpose of the DOJ memos banning the indictment of a sitting president while effectively indicting him in the court of public opinion, and watch as untold numbers of media personalities and former members of the SDNY, among others, use this dirty work to predict or demand the president’s indictment and/or impeachment.

5. As for impeachment, NDAs involving wholly private matters occurring before the president was even a candidate and completely unrelated to his office cannot legitimately trigger the Constitution’s impeachment clause. Indeed, they could not be more irrelevant. The history of the clause and its “high crimes and misdemeanors” language make it crystal clear that the office and the president’s duties are not affected in any conceivable way by these earlier private contracts. Of course, Democratic Rep. Jerrold Nadler, another NYC radical, could not care less. He’s more than thrilled to be an executioner in this French Revolution redux. The Constitution be damned. Meanwhile, he and the others wave around the Constitution as if they’re defending it against a tyrant. It is they who are the tyrants.

(Sorry for the temporary loss of oxygen to my brain!)

It has to do with the Oracle’s importance wrt “Time’s Person of the Year.”

I bet no more than 10% of fake news consumers know that Khashoggi was a muzzie with ties to OBL and was intent on spreading sharia around the world. The enemedia propaganda that he was a poor innocent journalist is laughable. I do not mourn when evil dies.

Trump Pounces on Chuck and Nancy in the Oval Office

FTA:
So Trump wants $5 billion. Here’s what’s happened. The original budget request for the Department of Defense, Trump did not give the secretary of defense, Mad Dog Mattis, every dime that he asked for. Trump actually has submitted a budget, or will, that does not contain — this is before today — the precise amount of money that Mattis wants. Pelosi and Schumer offering 1.3. Trump say he wants $5 billion. All of a sudden Trump has changed his mind on the defense budget, and he has told Mattis to submit a defense budget for the Pentagon of $750 billion.

This will be the proposal for fiscal year 2020. This is different from a previous promise that Trump had made to cut the defense budget. It wasn’t much, but it was still a cut rather than what usually are automatic expenses. The $750 billion number came out of a meeting last week when Trump got the lay of the land and figured out that Pelosi and Schumer are probably not going to come close to the $5 billion or agreeing to it in the budget, because this is all gonna happen next year. And they’re trying to get some of this done before the budget expires at the end of this year, government shutdown on December 21st if they don’t come to any sort of an agreement on spending for the remainder of the year.

Now, the original defense budget was $733 billion. That’s what Trump had previously said that he would support. Now he’s asked Mattis to go back and resubmit 750. The upshot is that if Pelosi and Schumer do not join him and authorize and agree to $5 billion for the wall, Trump is gonna take it out of the military budget. That’s why the increase from $733 billion to $750 billion. There’s $34 billion additional in the defense budget authorization or request than what the original number was.
...
So in the defense budget, if there’s $34 billion extra and Congress does not say that the money must be spent here, and if they do not earmark every dollar of the defense budget for certain projects, that means Trump’s theory is that, hey, that’s the money that’s not earmarked, it’s not specified, I can take it and do with it what I want since I’m commander-in-chief.

If the Democrats figure this out, figure out this is what’s going on, then they might try to earmark everything, or they might try to put something in legislation specifying that not a single penny of the defense budget or any other budget can be used to build a wall — or, as they might say, “Nothing over $1.3 billion.”

FTA:
Backstory: According to an email chain between Google executives obtained by Fox News’ Tucker Carlson and Breitbart News, Google’s Multicultural Marketing development head Eliana Murillo sent out an email November 9ht, 2016, detailing how Google had “supported partners like Voto Latino to pay for rides to the polls in key states,” which she characterized as a “silent donation.”

“We even helped them create ad campaigns to promote the rides (with support from HOLA folks who rallied and volunteered their time to help),” Murillo said. “We supported Voto Latino to help them land an interview with Sen. Meza of Arizona (key state for us) to talk about the election and how to use Google search to find information about how to vote. They were a strong partner, among many in this effort.”

What I was thinking was this:

I’m so glad I got plugged in to Q. While the normies are sweating all this fake news, I can remain calm. :)

“””I saw that, too but the article is dated yesterday. I’m guessing it was about Bush and it set up the very question that Graham asked Kavanaugh. Old news that’s vital for current events? We’re still at war and the Clinton/Obama administration DID collude with the enemy. Treason!”””

Thanks driver! You made me feel better.

When ABC’s “GERALDINE” lept from:

I thought, hmmmm, she writes as well as I, or,

she writes better than I can understand.

Or are both the same thing?

Nasty Pelousy sure hated the fact that Trump tricked them into having to show America what vile swamp dwellers they are. She objected to all the disinfecting sunshine Trump showcased their tactics in today. 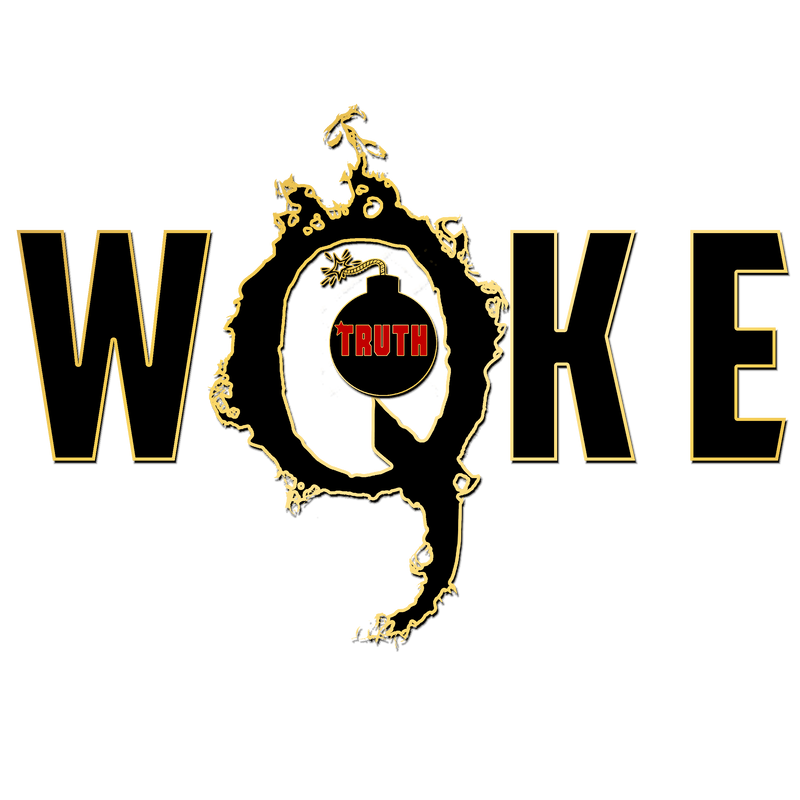 I loved EVERY minute watching those two idiots sitting there trying to act like they were important...Our President just turned them on their heads...and Our V.P. I still haven’t decided about him, we will see what happens when Our President gears up for 2020...

Making America Greater than ever...Our President is the best EVER!!!

The ABC article about civies on military tribunals is dated Dec 10 2001
I think it is just to point out that there is precedents.