Through all the twists and turns of the Deflategate saga, the legal bickering and in-depth air pressure analyses, the story remained compelling for one reason: It put the reputation of New England Patriots

when one of Trump’s “Make America Great Again” trucker hats was spotted in Brady’s locker. Brady explained that Trump had given the hat to Patriots owner Robert Kraft to pass along to the quarterback. Trump, Brady said, “always gives me a call and different types of motivational speeches at different times.” He said their friendship dates back to 2002, adding that “it’s pretty amazing what he’s been able to accomplish. He obviously appeals to a lot of people, and he’s a hell of a lot of fun to play golf with.”

Then, on Sept. 16, Brady was asked if Trump has a shot at becoming president. “I hope so,”​ Brady said. “That would be great.

...But he had two chances to distance himself from the nation’s most polarizing figure of the moment. He chose not to. “That would be great” is as close to an official endorsement as you can get.

Brady’s words carry weight. ...is one of the most recognizable figures in the country. An entire subsection of New England, young and old, worships him

in South Boston, two brothers allegedly assaulted a 58-year-old homeless man. Police said the brothers targeted the man because he is Hispanic. One of the brothers, Scott Leader, said he was inspired by Trump. “Donald Trump was right,” ...“All these illegals need to be deported.”

But by aligning with Trump, the candidate, he is by default aligning himself with Trump, the xenophobe; Trump, the Islamophobe; and Trump, the misogynist. If Brady takes issue with those aspects of the man, he should say something. ...that he condones such views.

SI is a waste of paper because you can’t flush it.

“It started on Sept. 8, when one of Trump’s “Make America Great Again” trucker hats was spotted in Brady’s locker”

The horror! The horror! If only it had been a kilo brick of Peruvian marching powder, or the gun Aaron Hernandez used to slaughter three people and maim two others. That wouldn’t be so bad. BUT a “Make America Great Again” hat??? My god man, no wonder Tom Brady’s recovering reputation immediately went into the toilet again. I mean, it’s not like most NFL football fans aren’t Trump supporters. 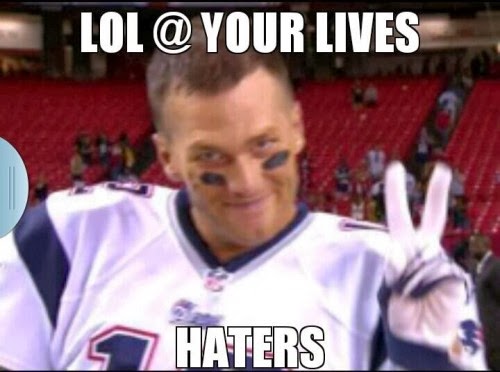 63 posted on 09/26/2015 4:24:57 PM PDT by big'ol_freeper (Mi baol ach dom olcas mise)
[ Post Reply | Private Reply | To 1 | View Replies]
To: Red Steel
The aspect that sickens me most, is that liberals like Leibowitz are so damn self-assured that theiropinions are the only viable opinions and the rest of us bums can stuff it.

64 posted on 09/26/2015 4:25:22 PM PDT by chiller (One from the Right - One for the Fight)
[ Post Reply | Private Reply | To 1 | View Replies]
To: chiller
"The aspect that sickens me most, is that liberals like Leibowitz are so damn self-assured that their opinions are the only viable opinions and the rest of us bums can stuff it."

He's not even consistent in his asinine article.

Brady HAS to explain his support for Donald Trump.

Then he states that Michael Jordan was a jerk for NOT supporting a candidate. "Republicans wear shoes".

Then the moron throws in a completely irrelevant story about thugs beating up a Hispanic guy who were "inspired" by Trump.

Hey Leibowitz, how about the hood rats "inspired" to beat up 81 year old white people?

I betcha there's someone who can be DIRECTLY linked to "inspiring" black on white random violence.

But enough about Obama.

There are rumors going around State Dept and Army that if you support Trump you are bigot and a racist and that you r career is over.

WTF was McElwain’s problem saying “they didn’t deserve it” in the post game interview with the chick reporter?

Because he tried to ice the kicker and it was a miss so his team “didn’t deserve it”?

I don’t get it. That’s the best game they’ve had in a long time.

You are correct sir. The only thing he owes this puke face Aaron guy, is to ask him if he knows where the sun don't shine. 😎

He said he called the timeout because Florida had 12 guys on the field.

I still don’t know how Florida pulled it off, guess it takes them having fourth down to do something.

The Dims have politicized or corrupted almost all institutions. Not even Tom Btady can escape their attempts at mind controlling scrutiny. This guy would send Brady to the gulags and salt mines if he could.

Yep....they’ve done a great job....of completely polarizing some of the most (formerly) enjoyable things about this country.

Sports Illustrated-—All the non-sports you can get.

Sports Illustrated-—Just another member of the left wing media.

What is left of SPORTS coverage in today’s pansy world

I’m no fan of Tom Brady, but he doesn’t have to justify his support for Trump before the LSM is forced to justify its blind fealty to the Hildebeast.

78 posted on 09/26/2015 6:24:34 PM PDT by PubliusMM (RKBA; a matter of fact, not opinion. 01-20-2017; I pray we make it that long.)
[ Post Reply | Private Reply | To 1 | View Replies]
To: PubliusMM
Tom Brady has to justify his support for Donald Trump the same way Charles Barkley and all them black basketball and football players had to justify supporting the biggest America hater and lover of America's enemies ever to have run for president, Barack Obama (I don't recall anyone ever asking them to justify anything).
79 posted on 09/26/2015 7:33:24 PM PDT by SmokingJoe
[ Post Reply | Private Reply | To 78 | View Replies]
To: Red Steel
Tom Brady needs to answer questions about his support of Donald Trump.

Who is this tiny worm, Aaron Leibowitz, who presumes to be entitled to apply the abuses described in "1984" to anyone he chooses, all by his tiny self?