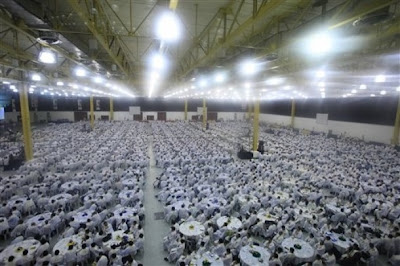 With the Vatican's Year for Priests now past its halfway point, it's been widely noted that this week's seeing a pretty exceptional gathering in the Philippines: some 5,500 priests -- three-quarters of the national presbyterate -- spending the week on group retreat (above) in Manila.

Sometime today, one of the week's high points is expected to take place -- a mass reconciliation rite, with individual confessions:


Monsignor Pedro Quitorio, spokesman for the [Filipino] bishops, said that, while priests lining up before a confessional box is not a common sight, they were also humans and not without sin.

"It's the same process. There's also penance and absolution," he told reporters.

Quitorio said priests, including bishops, were free to approach any of their colleagues to make their confession.

"It will be face-to-face. They can choose whoever they want to confess to," he said.


Impressive as the sight would be, the confession hall isn't open to cameras.

Such a beautiful and impressive sight!

**some 5,500 priests — three-quarters of the national presbyterate — spending the week on group retreat in Manila.**

May God bless these priest and bring more and more young men to the discernment of a call from the Lord to be a priest. Amen!