The Episcopal Church welcomes you!

Have a great time on the slippery slope...

I’d rather he petition to allow priests to marry. There is historical precedent in the past for married priests.

OTOH, I have not actually seen any historical precedents in the Christian church where women were ordained priest.

My thoughts exactly! LOL! I thought how funny it would be if, in response, he just scribbled down the address to their local Austrian Episcopal Church and say, I think they have all you desire right there.

To my understanding, there is historical precedent for allowing married men to become priests, not for allowing priests to marry.

Hold on. Let’s not jump to conclusions:

Obligatory celibacy for Latin-rite priests is one of the church disciplines that have been questioned publicly and repeatedly in Austria. Cardinal Schonborn said he gave Cardinal Claudio Hummes, prefect of the Congregation for the Clergy, a copy of a letter from a group of influential lay Catholics suggesting that the celibacy requirement be dropped because of a shortage of priests.

Cardinal Schonborn told Vatican Radio, “Despite the fact that I do not agree with some of the initiative’s conclusions, frankly I believe that it is important that people in Rome know what some of our laypeople are thinking.”

The cardinal said Pope Benedict has been “very impressive” in explaining how the continued requirement of celibacy for priests in the Latin-rite “ultimately is a question of whether we believe that it is possible for a man to give his life entirely to God” in serving the church and his brothers and sisters.

The cardinal said the pope has emphasized that the discipline of celibacy is not motivated by “mistrust of or a disregard for marriage,” but is a positive response to Christ’s call for total dedication for the sake of his kingdom.

7 posted on 06/19/2009 10:28:37 AM PDT by vladimir998 (Ignorance of Scripture is ignorance of Christ. St. Jerome)
[ Post Reply | Private Reply | To 3 | View Replies]
To: SeekAndFind
The word diakonos is used of both men and women in the New Testament--see Romans 16.1 (Phoebe). Whether deaconesses of the early church had a role similar to that of modern deacons, I don't know.

There's certainly no precedent in the Catholic Church for a woman being ordained priest or bishop, but the cardinal may not have intended to challenge that tradition.

Grrrr. I can’t wait until all these modernist bishops finally pass from the scene. They do infinitely more harm than good.

I didn't know that there were any "important" Austrian Catholics. From what I've seen, the Church there is virtually moribund.

The situation has reached "disaster" proportions in the Diocese of Linz (also mentioned in the article) where the Pope's nomination for auxiliary bishop recently withdrew amidst a storm of protest.

Schonborn has no business even bringing this "initiative" to Rome with him. It should have gone straight in the trash. He's a lame duck. A "pastor" tagging along meekly behind a lost and headstrong flock.

To think this guy wrote the Catechism or played a large part in it.

It’s amazing Cardinal Schönborn was supposed to be Pope Benedict’s right hand man, and a disciple of his. In the last year, he’s gone off the deep end.

11 posted on 06/19/2009 10:49:44 AM PDT by nickcarraway
[ Post Reply | Private Reply | To 10 | View Replies]
To: Verginius Rufus
Unless Mrs. St. Peter was an early buttoned down executive globe hopping for high level business purposes, don't you find it strange that she was not home when Jesus came to visit and that her elderly mother had to get off her sickbed to act as the lady of the house??? Is there any other reference to Peter being married? Is it not likely that his wife was dead before his priesthood began? Or that she had divorced him and moved away?

This also smacks of an initiative of the oooooh soooooo sophisticated elite. By reputation, Schoenborn is quite conservative and he is very unlikely to support this nonsense personally.

12 posted on 06/19/2009 10:51:30 AM PDT by BlackElk (Dean of Discipline of the Tomas de Torquemada Gentlemen's Club)
[ Post Reply | Private Reply | To 8 | View Replies]
To: nickcarraway; marshmallow
It’s amazing Cardinal Schönborn was supposed to be Pope Benedict’s right hand man, and a disciple of his. In the last year, he’s gone off the deep end.

Like you, I too was stunned. I stumbled upon the following while googling his name. This was the processional at a mass in Austria. It was taken only 3 months ago! 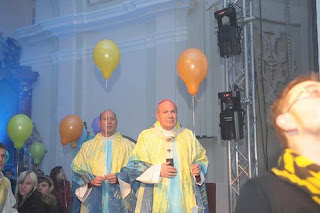 Vienna "Cardinal" Christoph Schonborn and his hip, irreverent "Youth Masses (right, Schonborn hold orange balloon during "procession You really have to see this stuff to believe it - that anyone can call this God honoring is beyond the realm!

Check out the Ecumenical Vespers, in the Diocese of Linz.

I was reading an analysis of Schonborn on an important Spanish blog yesterday, and the general feeling is that he is the most dangerous threat to the Pope because he masks his radicalism in moderate, conciliatory language (sort of like Obama). He is good at distancing himself from his more controversial positions.

In reality, he is opposed to virtually everything in the Pope’s vision even though his own diocese is a disaster, not only full of scandal and irregularities, but with a practicing Catholic population that grows smaller every day. Unfortunately, he is the youngest of the Cardinals, so even if Benedict lives for many years, Schonborn (who lobbied to try to get Martini elected pope last time around) will be young enough and political enough to be very influential in choosing his successor. And I’m sure Schonborn wants to be that successor.

It's such a surprise, isn't it!

Deaconess was never a clerical office. Deacon was from the very beginning.

The primary duty of the Deacon was to serve the congregation's needs and to assist at the Eucharist - especially with the preparation of the gifts and, later, the reading of the gospel.

The lay office of Deaconess was intended to serve the congregation's needs - primarily to tend to the needs of women (particularly during the initiation rites) in cases where the presence of a man would be a cause for immodesty. A Deaconess had no special liturgy (other than the ordinary liturgy of the laity) at the Eucharist.

Cdl. Schonborn is older than dirt. He’s probably getting real drifty by now, bless his heart. Yes, he should have junked the petition as a Gesture, but since he knows the recipient will trash it, same result.

Im all for irreverence, in the sense of Man not taking himself too seriously, but do they not get that if you’re not reverent in church you have no business being there?