Faces of Love Reflections on a year of cleansing and rebuilding.

At the end of each year I think about what I've learned or come to look at in a new way. In 2002 I sometimes mused on the following: Everyone says money can't buy love, but I'm not sure that's precisely true. Say a 43-year-old woman who's been working for years and is starting to feel anxious about the future, who's gotten tired of the dating grind and tired in general, meets a man who's worth $250 million. He's twice her age, rather homely and rather boring. In time he asks her to marry him. She says yes. Society immediately understands the situation: She's doing it for the money. And in truth she's going to like feeling secure, and she's going to like feeling like a victor after a long race. Society isn't wrong in its judgment. But maybe she isn't wrong when she tells her friends: "I love him." Because people have a way of loving what they need.

TOPICS: Constitution/Conservatism; Culture/Society; Editorial; Philosophy; Politics/Elections
KEYWORDS: peggynoonanlist
This is an extended version of the editorial that appeared in today's print version of the Journal.

The online article gets into the "What did Christ really look like" dilema. If I had to pick one famous figure I'd probably say OBL. Ironic, but more plausible than, say, Max von Sydow.

1 posted on 12/27/2002 7:56:04 AM PST by WaveThatFlag
[ Post Reply | Private Reply | View Replies]
To: WaveThatFlag
As time passes and the husband gets sick, the wife will care for him with great attentiveness and stay home with him and watch television. She'll be loving. As if she's in love. 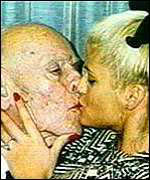 God bless Peggy Noonan. I am an unabashed fan of hers, and one of the reasons is the say she can whack someone up side the head almost without them even feeling it. She is a true treasure.

Sorry, Peggy, but you're wrong:

The first representation of Christ on record is actually a derisive graffiti on the wall of a house on the Palatine Hill in Rome. It pictured the body of a man being crucified but with the head of an ass. The inscription reads: "Alexamenos worships his god."

FOUNDATIONS of OUR FAITH; A LOOK at the EARLY CHURCH